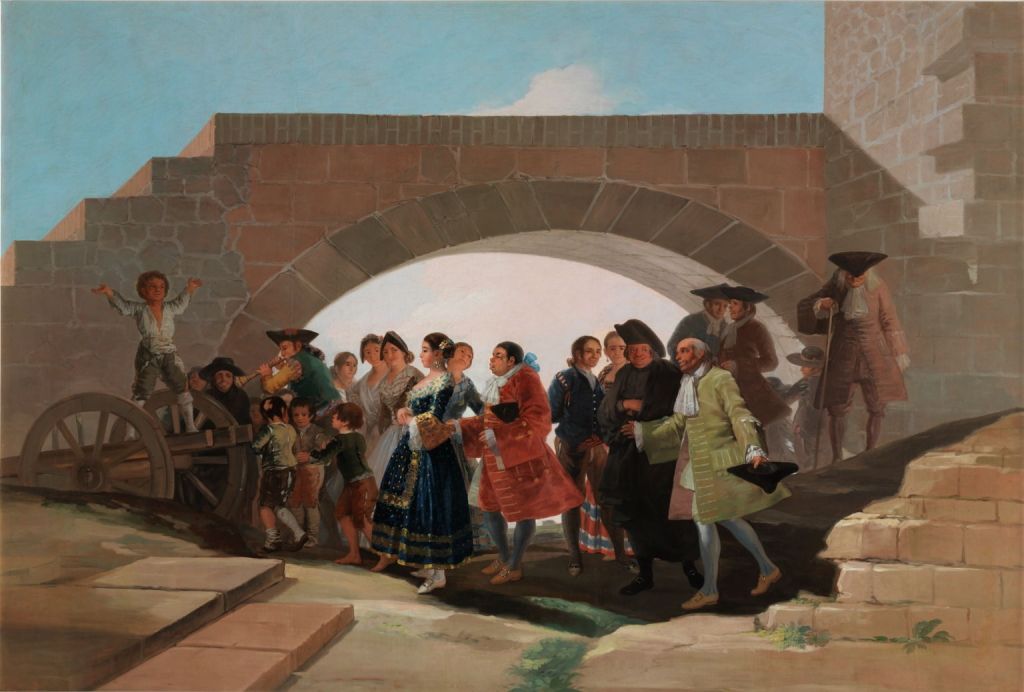 I ended my last article about Francisco Goya (1746–1828) with his final cartoons for tapestries commissioned by King Carlos III, who died on 14 December 1788. That year, Goya had also been commissioned to paint cartoons for tapestries to go into the bedchamber of the Infantas at El Pardo, but because of the technical difficulties in weaving their intricate motifs, they never proceeded beyond sketches.

The problems are more obvious in this highly detailed sketch of The Meadow of San Isidro on his Feast Day (1788), which only measures 42 by 90 cm. It combines figures of the upper classes in the foreground, a crowd in the middle distance, and a superb panorama of the City of Madrid in the background.

This sketch of The Hermitage of San Isidro (1788) is rather less detailed, but I’m sure would still have posed the weavers many problems.

The following year, as one of the new king’s two Court Painters, Goya completed one full-length and two more famous half-length portraits of the monarch, of which King Carlos IV in Red (1789) is my favourite. The fine detail in the silver decorations on the king’s clothing is splendid.

One of the major tasks of a court following the death of a monarch was the preparation of a complete inventory of the property of the crown. In 1789, Goya, together with Francisco Bayeu and Jacinto Gómez were directed to survey over two thousand paintings in the royal palaces of Madrid and its environs. Their inventory wasn’t signed and delivered until early 1794, and was a clear distraction. For Goya, though, it gave him the opportunity to study masterpieces by Velázquez, Titian, Rubens, Van Dyck, Brueghel and Tiepolo, among many others.

In 1790, the new king commissioned Goya to paint what proved to be his last set of cartoons for tapestries, again for El Escorial. The chosen theme was rural and humorous, which must have been a greater challenge. At least six sketches were completed, following which Goya made at least seven of the twelve cartoons by late 1792. I show five here.

The Wedding (1791-92) shows a comical marriage, with an ill-assorted group of guests, in what appears to be the dry moat of a castle.

The Little Giants (1791-92) is another childhood scene, with small boys revelling in the experience of being giants when piggy-back on their friends.

Stilts (1791-92) shows two men performing on stilts to the accompaniment of a couple of musicians.

The Seesaw (1791-92) is rather smaller than the others, and could be a sketch rather than the finished cartoon.

While Goya was supposed to be working on these wonderful paintings, France was in turmoil, following the storming of the Bastille on 14 July 1889 and the start of the French Revolution. Darkness descended across Europe. Goya took the opportunity to stay in Valencia for two months, and afterwards grew increasingly uncooperative at court, delaying completion of these cartoons further. Fortunately for him, this was overshadowed by more serious turmoil at court as senior figures were removed from office and replaced, in response to rising tensions with France.

In late 1792, Goya apparently fell ill with colic, and early the following year he was given leave to go Andalucia to recuperate. Modern speculation is that the artist was suffering from lead poisoning, from his oil paint. He suffered badly from tinnitus, and became quite deaf.