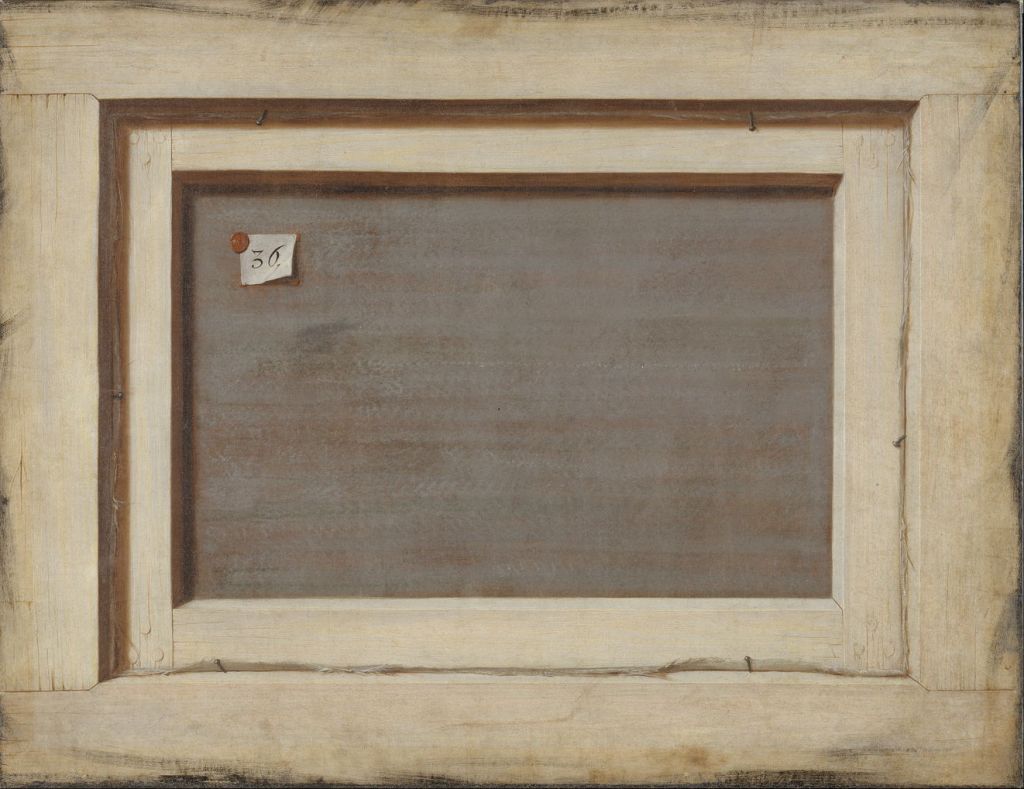 In a sense, all traditional still life paintings are intended to deceive the viewer’s eye, making this a genre of the trompe l’oeil. But the really deceptive go a good bit further than just looking real, after all we’re quite used to landscapes which appear highly realistic and detailed, but don’t see those as deceptive. What makes the difference between really realistic painting and a trompe l’oeil are the little devices used to create the illusion that this isn’t a painting at all.

From early in the Renaissance, painters realised that they could mimic three-dimensional artworks using a flat painted surface. Jan van Eyck’s The Annunciation Diptych (c 1433-35) probably started from the concept of a monochrome grisaille, and ended up as vividly 3D as any sculpture.

This painting by Jacopo de’ Barbari is often claimed to have been the first still life. Still-Life with Partridge and Iron Gloves was painted in 1504, and the artist employs the idiosyncratic device of placing his signature on a piece of paper which appears to be attached to the painting, a skilful deception.

Spanish painter Juan Sánchez Cotán set his Quince, Cabbage, Melon, and Cucumber (c 1600) in a small alcove, with the quince and cabbage strung up to enjoy stark contrast against the black background. Without its frame, it could easily be mistaken for a recess in the wall.

If a painter could feign a sculpture, other small wall-mounted objects were within reach. Carel Fabritius put The Goldfinch (1654) on someone’s wall; with a light frame on an off-white wall, it must have looked very realistic, and just the sort of thing you might see during the Dutch Golden Age.

Cornelis Norbertus Gijsbrechts was one of several Dutch artists who specialised in the production of trompe l’oeil still lifes. The wall-mounted letter-rack shown in his Board Partition with Letter Rack and Music Book (1668) became a popular and lasting theme which reappears later in this selection.

Some of Gijsbrechts’ trompes l’oeil became quite elaborate too, such as his Cabinet in the Artist’s Studio (1670-71), which also uses a hanging curtain device, something used more generally in religious art.

This final example from Gijsbrechts’ work is worthy of the twentieth century: Trompe l’oeil. The Reverse of a Framed Painting from 1668-72. There’s little new in so-called modern art after all.

After the Dutch Golden Age, these small trompes l’oeil fell from favour. All the best deceptions then contained people, often crowds high on ceilings in much grander works. Then in the nineteenth century they returned for a variety of special purposes.

The American artist Raphaelle Peale used his Venus Rising From the Sea – A Deception (c 1822) as a visual criticism of the smallminded attitude to the display of paintings of nudes at the time. Peale’s extra twist is that, rather than using a curtain, his nude is concealed by a handkerchief, with his signature carefully embroidered in one corner.

Paul Cézanne had no intention to deceive with his roughly painted Stove in the Studio from about 1865, but includes the back of a canvas in what we might see as a reference to Gijsbrechts’ Trompe l’oeil. The Reverse of a Framed Painting. However, I’d be surprised if Cézanne had ever seen that earlier work.

One of the most brilliant trompes l’oeil, which is sadly entirely figurative, is Pere Borrell del Caso’s Escaping Criticism (1874). This shows its single figure climbing through the false frame as if it were a hatch, allowing them to move from the flat constraints of the canvas back out into the 3D world of the viewer.

In 1888, William Harnett’s Mr. Hulings’ Rack Picture refers back to Gijsbrechts’ letter racks of more than two centuries earlier. This was apparently one of a number of such paintings which were briefly popular in the late nineteenth century.

In the twentieth century, trompes l’oeil once again grew into grander illusions painted on large walls.

This wonderful fresco, in the library of Chateau Thal, Kettenis, in Belgium, was painted in 1987 by Rainer Maria Latzke, a modern specialist in trompes l’oeil.

With the advent of more durable paints and easier means of access, other artists have transformed the outside surfaces of whole buildings to similar effect. In 1989, Richard John Haas painted two huge murals on the side of the Sovereign Hotel, Portland, OR, to change its appearance. These false sculptures recall those early van Eyck grisailles.

The other trend in deceptive art has of course been the upward spiral of super-, hyper- and mega-realism which can prove powerfully deceptive.