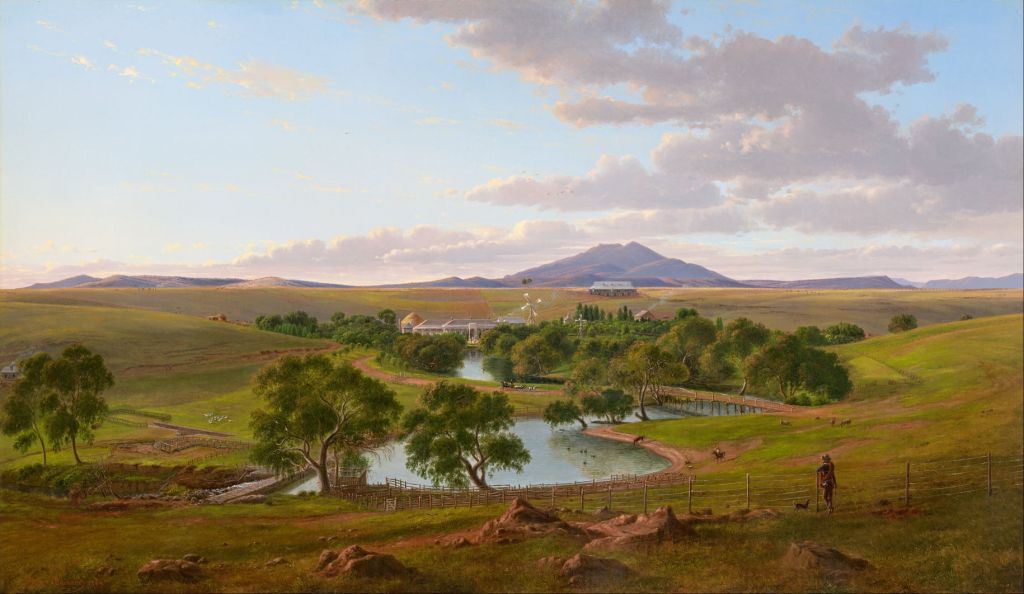 Until the nineteenth century, at least, most paintings were commissioned or bought by the wealthy, many of whom lived in palaces, mansions and other stately homes. Today and tomorrow I look at a selection of paintings of those grand houses, including a few owned by the more commercially successful artists themselves.

Although an obvious sign of the unfairness throughout history, stately homes are often fascinating in themselves. In literature, they may grow far beyond a mere setting, and come to dominate works such as Mervyn Peake’s Gormenghast trilogy.

Sometimes, these buildings make an almost incidental appearance, as in the Five Senses series of allegories painted jointly by Jan Brueghel the Elder and the young Peter Paul Rubens.

In their Sight (1617) is a cornucopia of visual and optical artefacts. Look beyond those and you’ll see one of the palaces of Albert VII, Archduke of Austria, and his wife Isabella, governors of the Spanish Netherlands at the time.

Hearing (1617-18) provides a more distant view of a landscape fit for the ruling couple.

At the other end of his career, Rubens retired to his own country estate. This is my favourite of his late landscapes showing his property.

Rubens was rich enough to be able to buy himself a comfortable estate just to the south of Antwerp, and wanted a few years to enjoy life with his family, which continued to grow: his last child was born here eight months after his death.

An Autumn Landscape with a View of Het Steen in the Early Morning (c 1636) is one of the larger of these retirement landscapes, now in The National Gallery in London. As the sun is rising off to the right, a man drives a cart, on top of which a woman is perched precariously, away from Ruben’s castellated mansion. Beside that stream, a hunter stalks game with his gun and dog.

A small group of people are on the grass in front of the house: a woman is seated, perhaps nursing an infant; next to her is another woman, and a man. Another man is fishing in the moat, from the bridge which connects its main entrance with the outside world. At the far right, a milkmaid walks out to a small herd of cows.

We’ll never identify the stately homes featured in Nicolas Poussin’s idealised landscapes; perhaps like Gormenghast they’re more an image in his mind than any real location. One of the best of these is seen in his Landscape with a Calm from about 1651.

The most prominent feature of the painting is its large Italianate villa. In front of its outermost earthworks, two herdsmen tend a flock of sheep and cattle. The man on the left is playing bagpipes. There are figures scattered just outside and within the grounds of the villa, and two visible at its ground floor windows.

Giovanni Paolo Panini’s paintings of Ancient Rome (1757, above) and Gallery of Views of Modern Rome (1759, below) are almost certainly wholly imaginary, although some of their figures look to have been identifiable as leading collectors of the time.

Caspar Wolf’s painting of the imposing castle of Schloss Neu Bechburg at Önsingen (1778) is of historical importance. This castle was built in about 1250, and still stands today in central northern Switzerland.

Sometimes landscape artists had very different views on the houses they were paid to paint.

John Constable’s commissioned painting of the house and estate at Wivenhoe Park, Essex (1816) is unusual to say the least. Instead of depicting the grandeur of Major-General Francis Slater-Rebow’s country seat, Constable shows it in the distance, its fine architecture almost concealed by trees. His horizon is also low, and draws the eye up to the cumulus clouds of an English summer sky, which compete with the lake and meadows of the lower half of his composition.

Carl Gustav Carus is another artist who made significant records of some of the stately homes of central Europe. His plein air oil sketch of Saxon Countryside. Sonnenstein near Pirna (Saxon Castle) from about 1824 shows this massive castle which was built high above the River Elbe near Pirna, not far from Dresden, from about 1460.

There had previously been a mediaeval castle on its site, and from 1811 it was used as a mental hospital, pioneering what is now known as occupational therapy in mental illness. From early 1940, the Nazis used part of the castle as a killing centre before turning it into a military hospital in late 1942. Since the war, it has undergone extensive refurbishment, and in 1970 was re-opened for disabled people, with a rehabilitation centre and workshops.

The Austrian artist Eugene von Guérard spent some years painting grand homesteads for their owners. Yalla-y-Poora from 1864 shows a palatial pastoral station in Victoria’s Western District then owned by John Ware, who had its well-watered valley planted with a mixture of native and British tree species. The peak in the far distance is Mount Challicum. This was one of von Guérard’s last commissioned paintings of a homestead, as the fashion for these waned. He made his studies for this painting during a visit in May 1864. Ware’s country mansion had only recently been built using bluestone, but suffered severely from rising damp and had to be replaced in 1905.