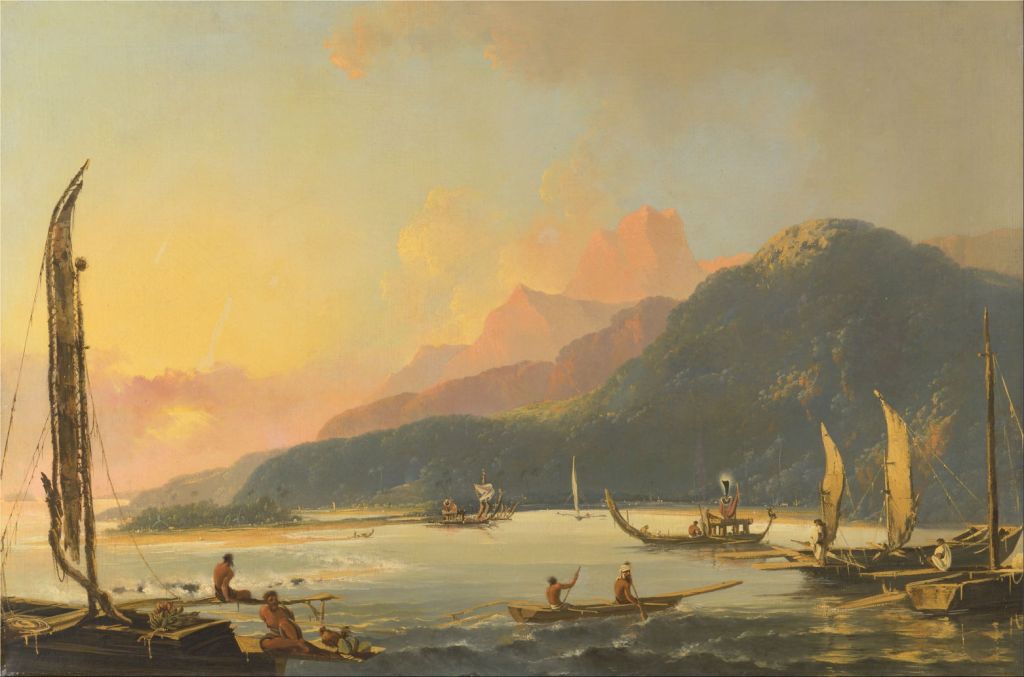 Hodges trained initially under William Shipley, who founded the Royal Society of Arts, and then went on to the studio of Richard Wilson, one of the fathers of British landscape painting and the founding father of painting in Wales. There he met Wilson’s accomplished pupil Thomas Jones, another major British landscape artist of the day. Hodges’ paintings follow in the distinctive tradition established by Wilson, and compare with those of Jones.

Cook’s mission on this second voyage was to search for the hypothesised continent of Terra Australis. Although Cook had already demonstrated that couldn’t be New Zealand, which he circumnavigated during his first voyage, and Cook had already surveyed almost the whole of the eastern coast of Australia, influential members of the Royal Society still believed that this ‘massive’ continent existed, and it was up to Cook to find it for them.

Cook took two ships, HMS Resolution and HMS Adventure. They became separated in the fog, forcing Adventure to return to Britain, while Cook, in command of Resolution, came tantalisingly close to the continent of Antarctica, but never discovered it. He did, though, visit Tahiti to resupply, New Zealand, Easter Island, Vanuatu and other Pacific Islands, and discovered South Georgia and the South Sandwich Islands. Hodges painted many of them, although most of his finished oil works seem to have been painted in the studio long after he had returned from sea.

Hodges’ sketched portrait of Otoo, King of Tahiti made in August 1773 gives insight into his working methods when at sea. This is also a historical record of the first king of Tahiti between about 1788 and 1791. Otoo was later known as Pōmare I (1742-1803), written fully in old orthography as Tu-nui-ea-i-te-atua-i-Tarahoi Vairaatoa Taina Pomare I, also known as Tu or Tinah or Outu or simply as Pomare I.

A View in Dusky Bay, New Zealand (1773) is an unusual oil tondo version of one of Hodges’ favourite views, which he painted repeatedly. Cook had discovered this sound, now known as Tamatea, at the extreme south-western tip of South Island in 1770. During his second voyage, Cook used it as an anchorage and base in March and April 1773.

Under another painting of View in Pickersgill Harbour, Dusky Bay, New Zealand from 1773-76, this original oil sketch of icebergs was found in 2004 and is shown here in a painted reconstruction by Pieter van der Merwe. The two ships shown at the far left are HMS Resolution (the larger) and HMS Adventure.

This painting attributed to Hodges is claimed to show a Dodo and Red Parakeet (c 1773). Although it’s unlikely that Hodges ever visited one of the locations in the Indian Ocean which had dodos in the past, it was recorded mainly on Mauritius, and the last living specimen was recorded in 1662, over a century earlier.

Hodges’ view of The Landing at Tana, one of the New Hebrides is thought to have been painted after his return to Britain, in 1775-76, although it looks quite sketchy. Tanna Island is now in Vanuatu, and has an active volcano, seen in the far distance.

Hodges painted this Portrait of James Cook in 1775-76.

Tahitian War Galleys in Matavai Bay, Tahiti, which Hodges painted in Britain in 1776, shows an anchorage used by Cook on four occasions. On his first voyage, it was the site of the observatory used to study the transit of Venus. Hodges visited it twice during Cook’s second voyage, in August 1773 and again in May 1774. His style shows the strong influence of Richard Wilson, and in turn his influence by Claude Lorrain.

In 1778, Hodges travelled to India, where he painted under the patronage of the statesman Warren Hastings. He stayed in the country for six years, visiting many locations which were ideal for landscape views. Selected paintings were engraved and published in his book about his travels in India, published in 1793.

The Marmalong Bridge, with a Sepoy and Natives in the Foreground (c 1783) shows the oldest bridge across the Adyar River in Chennai (formerly Madras), Tamil Nadu, India, now known as the Maraimalai Adigal Bridge. This was originally constructed by an Armenian merchant in 1728, and wasn’t replaced until 1966.

Several years after his return to Britain, Hodges painted this curious view of the world-famous white marble mausoleum, The Taj Mahal (c 1788). I suspect this image is slightly on the incline, and the artist set its horizontals more level. But most views of the Taj Mahal show its impressive formal garden; Hodges instead painted it from the opposite bank of the River Yamuna. The mausoleum had only been completed in 1648.

In the late 1780s, Hodges travelled across Europe, ending up with a visit to Saint Petersburg in Russia in 1790.

Hodges painted this Storm on the Ganges, with Mrs. Hastings near the Col-gon Rocks in about 1790. The Mrs. Hastings of the title was his patron’s wife. She was formerly Mary Buchanan, the widow of one of the victims of the ‘Black Hole of Calcutta’ incident in 1756.

Hodges appears to have had strong views about war. When two of his paintings contrasting the effects of peace and war were shown at a solo exhibition in London in 1794-95, Prince Frederick, second son of the King, was offended, ordered the show to be closed, and ended Hodges’ career as an artist.

One of Hodges’ last paintings of Cook’s second voyage is A View of the Monuments of Easter Island, Rapanui (1795). These famous rock sculptures, moai, are common around the island’s coast. Easter Island wasn’t visited by any European before it was discovered by the Dutch explorer Jacob Roggeveen on Easter Sunday 1722. By this time, Hodges’ style has become lighter and more modern.

Hodges retired to Devon, where he died in 1797, when a bank in which he had invested heavily crashed, in a national banking crisis. Although his death was attributed to natural causes, it was rumoured to have been suicide. His role in the history of British landscape painting has since been largely forgotten.

Today there are two major collections of Hodges’ paintings: 26 of his oil paintings from Cook’s voyage are in the National Maritime Museum, in Greenwich, London, and more are in the Yale Center for British Art, New Haven, CT.