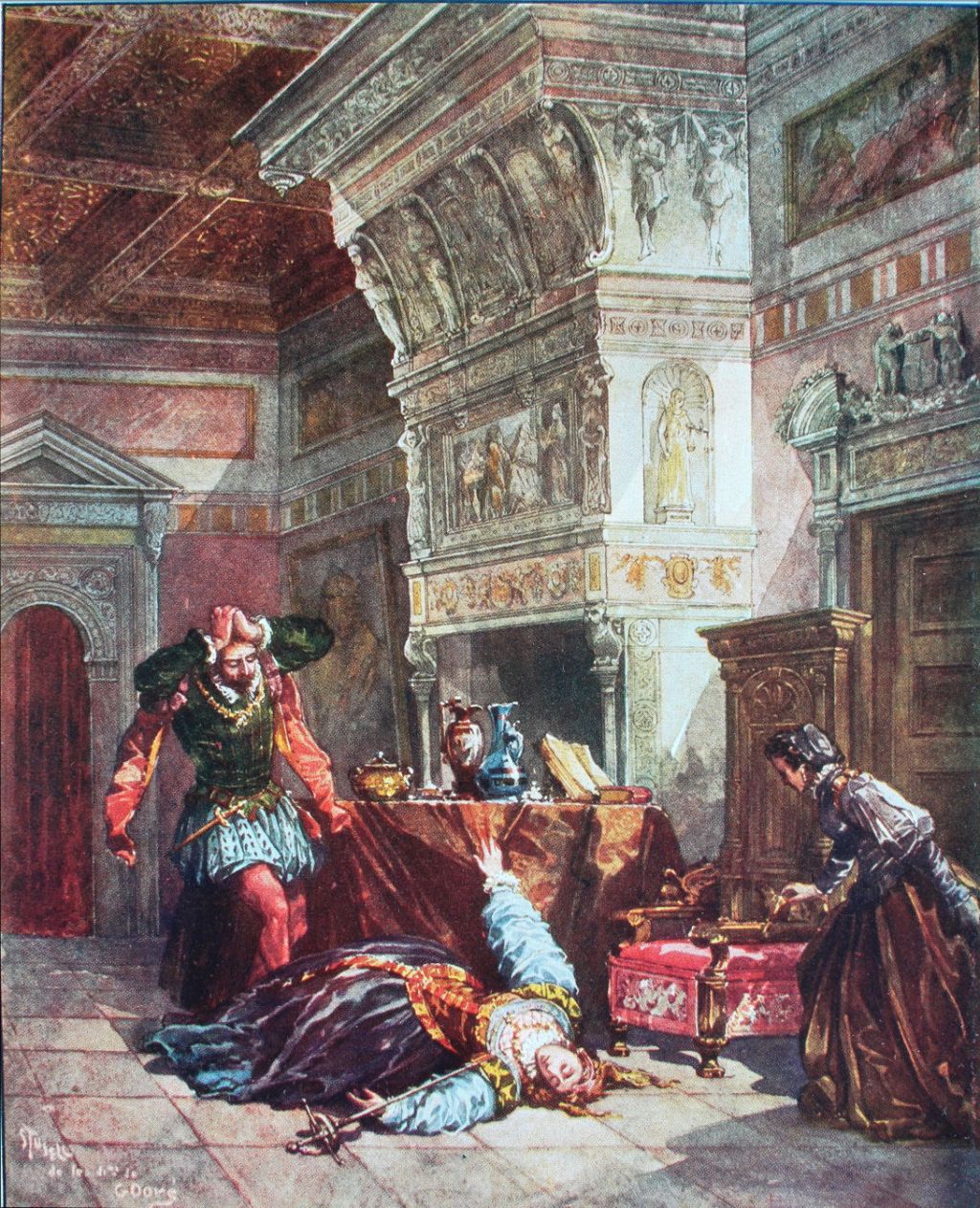 In the previous episode, the group escorting Don Quixote back to his village had reached the inn where Sancho Panza had been tossed high in the air. Don Quixote went straight to bed, and while he was asleep the others ate and discussed books about the adventures of knights. The priest started reading one out loud, The Tale of Inappropriate Curiosity, and Cervantes then tells that story in full.

Two good friends, Anselmo and Lotario, lived in Florence. Anselmo married a fine and virtuous woman, Camila. He came up with a plan to put her virtue to the ultimate test, in which his friend would tempt her to be unfaithful. Despite Lotario’s resistance, they went ahead. At first Lotario deceived his friend by not trying to woo Camila at all, but Anselmo discovered this, and left his wife in the care of his friend when he went away for a whole week. Over that time, Lotario became attracted to Camila and made his first pass at her; she was so confused that she went to her room and immediately sent a letter to her husband.

Camila’s letter to her husband pleaded for his immediate return, warning that if he didn’t come back soon, she’d have to go and stay with her parents, leaving their house unguarded. When Anselmo read this, he realised that his friend had started his campaign to seduce his wife, and sent a message back telling Camila not to leave the house but to await his return “soon”.

When she heard this, Camila was more confused than ever, but followed his instructions and didn’t avoid Lotario. The following day her resistance to him weakened, only encouraging his ardour all the more, and when he started praising her beauty, she finally succumbed. Only her maid Leonela knew of her seduction, and Lotario couldn’t bring himself to explain to her how it was just a test devised by her husband.

When Anselmo returned a few days later, Lotario was in his own home again, and assured him of his wife’s fidelity. Anselmo was delighted to hear this, and believed every word, but asked his friend to keep his campaign going. Lotario declined, though. Anselmo then went home and asked his wife why she had written her letter. She pretended that she had been mistaken, and that nothing untoward had come of it after all.

The following day the three were sitting after dining together when Anselmo asked Lotario to recite a sonnet he had written in praise of Chloris, as part of his campaign for Camila’s seduction. She understood that Lotario intended his poetry for her, and asked him to recite more. Anselmo praised this as he had the first, only making the situation worse, as he still believed every word that his friend had told him about his wife’s virtue remaining intact.

Camila discussed her predicament with her maid, who reassured her that she hadn’t given in to Lotario too soon, and that he was a good man and a true lover for her. All Camila could do was to ask her maid not to breathe a word about this to anyone. However, this caused Leonela to become brazen with her own lover, knowing that her mistress wouldn’t dare risking exposure of her own affair.

When Lotario discovered the maid’s lover leaving the house at dawn, it never occurred to him that the man was Leonela’s lover, and he assumed he was another lover of Camila’s. In a fit of jealousy, he confronted Anselmo, who was still in bed, and broke the news to him that he had seduced his wife when he had been away, claiming that he had delayed telling him this to see whether it was just a passing whim of hers, and if she’d tell Anselmo herself.

Anselmo was stunned and speechless. He then asked Lotario to keep this secret. Lotario then went to Camila, intending to tell her all, but she pre-empted him by telling him of her maid’s lover and their brazen behaviour. Lotario, though, assumed this was her trick to conceal another lover, and told her what he had said to her husband in his rage of jealousy. Camila rebuked him for this, and came up with a plan for the next day, but refused to explain it fully to Lotario.

The following day, as expected by Camila, Anselmo excused himself, saying he was off to visit a friend, and went to hide in a garderobe [a small storeroom like a very large wardrobe] adjoining his wife’s bedroom, unwittingly aided by Camila and her maid, who then walked into the garderobe to discuss Camila plunging her husband’s dagger into her breast. Her maid asked whether she intended to end her own life, or that of Lotario. Camila then told Leonela to fetch Lotario, so that she could kill him in loyalty to her husband, who decided to remain hidden rather than revealing himself.

Camila then suffered a fainting fit, leaving her maid to lament over her mistress’s virtue. When Camila recovered, Leonela was finally persuaded to go and fetch Lotario. While she was alone (her husband still watching from the garderobe), Camila paced the room and brandished the dagger, causing her husband to become increasingly agitated.

When Lotario appeared, Camila drew a line on the floor with the dagger, and told him that if he crossed it, she would plunge the dagger into her breast immediately. She then ordered Lotario to tell her what he thought of her husband, and whether Lotario knew her. Lotario had suspected that this was coming, and declared his longstanding friendship with Anselmo. Camila called him a traitor, and told him that he was going witness her killing herself, when it was he who deserved death. She then lunged at him as if to bury the dagger in his chest instead, and Lotario was forced to defend himself vigorously by grasping her hand holding the dagger.

Camila wrested her hand free, placed the point of the dagger where it would slip into her armpit causing but a flesh wound, pressed it home, and collapsed as if she had pierced her heart. Lotario went to draw the dagger free from what he thought was a deep and fatal wound, and realised the ingenuity of Camila’s trick. Lotario then lamented her death, let Leonela place Camila’s body on the bed and tend her wound, before leaving the house to hide.

Camila and her maid then discussed the deception, with Anselmo still listening in the garderobe and completely convinced of his wife’s virtue. The two women provided him with an opportunity to escape, allowing Anselmo to go straight to his friend’s house and rejoice at the vindication of his wife’s virtue after all. But Lotario viewed events very differently.

For the time being, Anselmo remained the close friend of the man who had destroyed his reputation, and his wife greeted her husband with a smile in her heart.

As the priest was nearing the end of The Tale of Inappropriate Curiosity, Sancho Panza raced down from where his master had been asleep, shouting that Don Quixote was doing battle with Princess Micomicona’s enemy, and had just cut the giant’s head off. The squire reported that the giant’s blood was flowing in torrents, which made the innkeeper suspect that the knight had cut up some skins of red wine which he had stored behind Don Quixote’s bed.

When they reached the bedroom in the loft, Don Quixote was still in his night dress, fast asleep with his sword in his hand, in the midst of a dream in which he had slain the giant. The loft itself was flooded with the red wine which had gushed from the skins which the knight had slashed open with his sword. The innkeeper punched Don Quixote furiously, and had to be restrained by Cardenio and the priest, but the knight only woke up when the barber threw a bucket of cold water over him.

Sancho Panza was still convinced that he had to find the giant’s head, when Don Quixote fell to his knees in front of the priest, whom he mistook for Princess Micomicona, and announced the completion of his quest, only confirming his squire’s continuing misapprehension.

The others managed to get Don Quixote back to sleep in his bed, and comfort Sancho Panza, but were unable to pacify the innkeeper and his wife, who by this time had taken to screaming until Dorotea managed to calm her down. Finally the priest was able to complete the rest of the story.

Anselmo, now completely convinced of his wife’s virtue, returned to his happy life. Camila glowered whenever she saw Lotario so that her husband continued to believe in her. Lotario asked not to see them again, but his friend told him to continue to visit. Leonela enjoyed her relationship with her lover knowing that Camila could only cover up for her.

But one night this all unravelled when Anselmo discovered Leonela’s lover, but didn’t believe her when she told him he was just her husband. He drew his dagger and threatened to kill her if she didn’t tell him the truth. The maid promised to tell him something that would amaze him, if only he’d wait until the morning. The unsuspecting Anselmo agreed, and locked her in her room until she was ready to tell him.

When Anselmo told his wife of this, she was in great fear that her maid would reveal the truth about her infidelity. Without waiting, Camila gathered up her best jewellery and some money, and fled to Lotario, whom she asked to find her a hiding place, or to elope with her. Lotario didn’t know what to do at first, then took Camila to a convent where his sister was prioress. He left her there and fled.

The following morning, Anselmo discovered that the maid had escaped through a window, so went to tell his wife, only to discover that she had gone, with most of her jewellery. When he went to see his friend Lotario, his servant told him that he too had gone missing in the night. His wife, his friend, his servant had all vanished, and he could only see how this was going to be his own undoing.

Anselmo shut up his house, and rode off to his friend in the nearby village. Half way there he was overcome with grief, and had to rest until it was growing dark. He hailed someone who had just left Florence, and asked him for the news. The traveller told him what he knew already about the disappearance of his wife and friend, and that the maid had said that the two had run away together, which had amazed all those that knew them.

Anselmo managed to reach his friend’s house with great difficulty, where he asked to be put to bed with pen and paper. He knew he had little time to live, and tried to write an account of events before death caught up with him. His friend discovered the body of Anselmo later that night, hunched over a few lines of writing in which Anselmo forgave his wife.

Camila remained in the convent, and only took the veil when she heard that Lotario had been killed in battle. She too died shortly afterwards.

Having finished reading the story, the priest remained unconvinced that any husband would be so stupid as to perform such a test.

That completes the thirty-fifth chapter of the first book of Don Quixote.