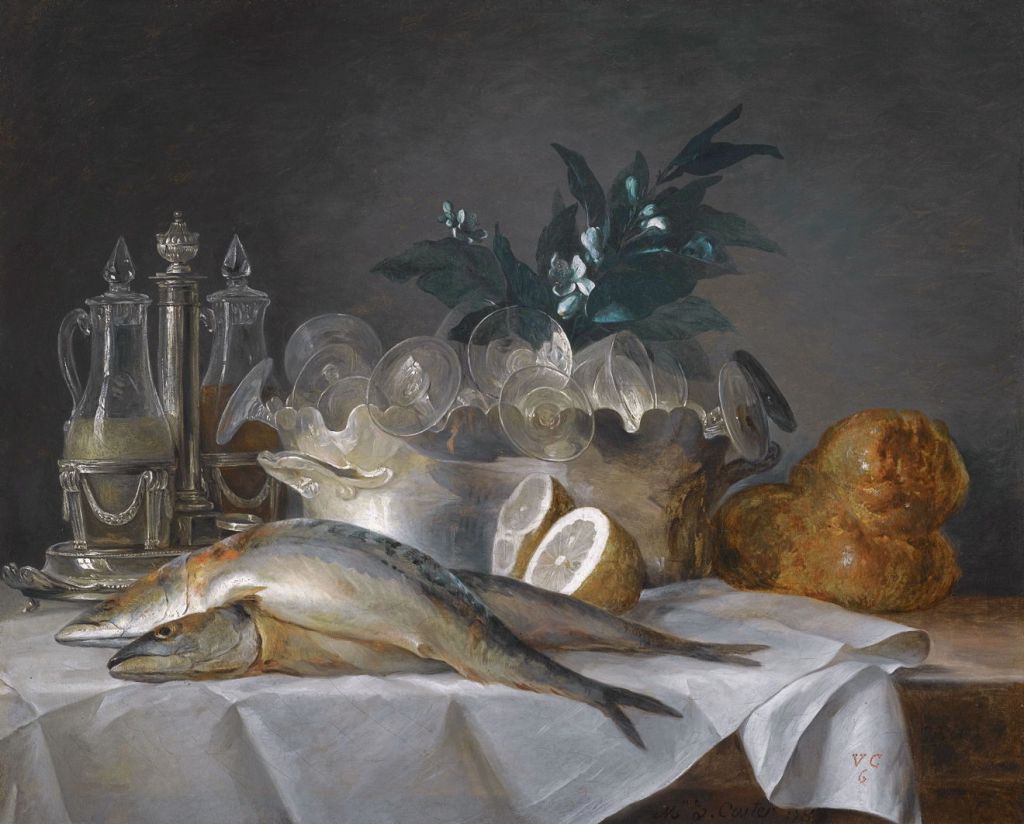 Anne Vallayer-Coster (1744–1818), A Still Life of Mackerel, Glassware, a Loaf of Bread and Lemons on a Table with a White Cloth (1787), further details not known. Wikimedia Commons.

After the blossoming of still life painting during the Dutch Golden Age, the eighteenth century was very different. In the main, the genre fell into relative obscurity, although floral arrangements remained reasonably popular. There were two exponents of the genre, though, who in their own way developed it further.

Jean-Baptiste-Siméon Chardin (1699–1779) was something of an oddball. At a time when France was head-over-heels in the Rococo, he assumed the mantle of the Golden Age still life painter, and produced small and quite eccentric paintings.

Among the first of his successful still lifes is The Ray from 1727, which he exhibited the following year to secure his place in the Académie Royale de Peinture et de Sculpture, an organisation in whose ranks he rose as an officer, eventually overseeing its Salons.

This is an extraordinary combination of objects, dominated by the ghostly ‘face’ of the hanging fish, ably supported by the anger of the cat.

Chardin’s subsequent Still Life with Ray and Basket of Onions from 1731 is less well-known, and explores the form of its various objects more. At a time when potential patrons were more interested in precious metals, Chardin introduced the rich earth colour of copper kitchen pots and pans, keeping his paintings within a narrow chromatic range.

His small painting of a Copper Water Tank and other mundane objects from about 1734 is remarkable for apparently showing colour in the shadow of the tank almost 150 years before the Impressionists opened the debate on whether shadows are coloured.

Chardin took up the well-established theme of the meal in The Kitchen Table or Preparations for Lunch from 1756. This is extended to a small occasional table at the right, and contains a standard array of objects with interesting optical properties, such as silverware, glass, and glazed pottery.

Dead game had also continued to be included in hunting still lifes. Several of Chardin’s small output of about 200 paintings included hanging game, here an undated Rabbit and Copper Pot, elsewhere hares and others.

A few of his still lifes are larger, more highly finished, and more complex. Late in his career, in 1766, he painted The Attributes of the Arts and the Rewards Which Are Accorded Them, in which each object has a clear association. Painting is represented by the brushes and palette on top of a paintbox. Architectural drawings and drawing tools represent architecture. The bronze pitcher at the right refers to the work of the goldsmith. The red portfolio tied with ribbons represents drawing. The plaster model of the figure of Mercury in the centre is a copy of a sculpture by J B Pigalle, a friend of Chardin, who was the first sculptor to win the highest French honour for artists, the Order of Saint Michael, whose cross and ribbon are shown at the left.

By the 1770s, Chardin’s failing eyesight made oil painting increasingly difficult. He switched to pastels, at which he excelled, and died in 1779.

As Chardin’s curious still life paintings dwindled in number, a new artist assumed the vanguard of the genre: Anne Vallayer-Coster (1744–1818). She had the great advantage that her father was involved with the Gobelins tapestry business, and was able to teach her to paint, but the huge disadvantage of being a woman. She seems to have been mentored by other women artists, and at one time by Joseph Vernet, and her great talent and skills brought her membership of the Académie Royale in 1770. But without training in life classes, or a proper apprenticeship, she was limited to painting portraits and still lifes.

From the start, she built on the foundations provided by the Golden Age and Chardin, adding her own distinctive innovation. This is clear in her unusual choices in this Still-Life with Tuft of Marine Plants, Shells and Corals from 1769, with its fascinating range of surface textures and forms. Where she departs from Chardin is in her broad palette.

Her Garden Still Life, with Implements, Vegetables, Dead Game, and a Bust of Ceres (The Attributes of Hunting and Gardening) from 1774 is another relatively large canvas which develops from hunting and game. At the left edge is a scythe, and at the right a sickle or hook, between which are some of the rewards obtained by gardening. These are all overseen by Ceres, the goddess more traditionally associated with the grain harvest.

Vallayer-Coster’s Still Life with Brioche, Fruit and Vegetables from 1775 is more traditional in its simplicity and look.

After Chardin’s death in 1779, Vallayer-Coster reached her zenith, in brilliant displays such as A Still Life of Mackerel, Glassware, a Loaf of Bread and Lemons on a Table with a White Cloth from 1787.

She was fortunate to escape the French Revolution in 1789, but her strong associations with the monarchy and aristocracy were severed. She appears to have concentrated more on floral arrangements in those later years of her career as a result.

Her small and undated Bouquet of Flowers in a Glass of Water perhaps comes from those years, when her innovation had been lost.

Chardin and Vallayer-Coster were by no means the only artists who painted fine still lifes during the eighteenth century.

Jan van Os’s Flowers from about 1780 is a much later example of the combination of flowers, fruit and butterflies, featuring a Peacock, Swallowtail and Red Admiral. Each would have been painted from a dead specimen in a collection; collections became popular as the Age of Enlightenment encouraged the better-educated to take an active interest in developing sciences such as entomology.

Painted in 1804, Johann Amandus Winck’s magnificent still life of Flowers and Fruits on a Stone Ledge with Butterflies and Mice makes good use of two butterflies, a housefly (perhaps in a vanitas reference), a mouse and a snail. It also takes us to the nineteenth century, when everything else in painting was turned upside down. Next week I’ll start to look at how still life painting changed then.