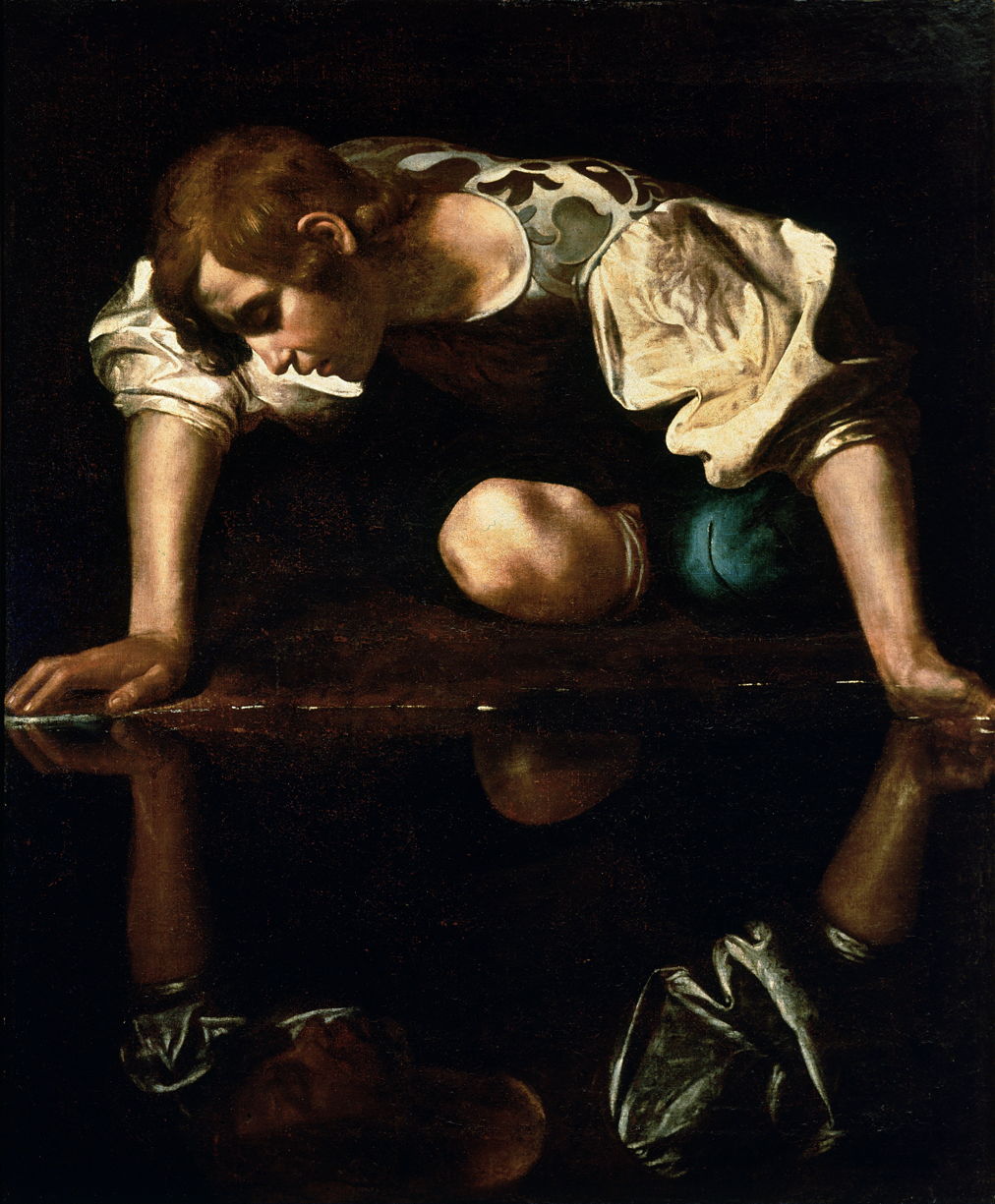 If we’re a bit vague as to when the Renaissance started, the date of its ending is even woollier, and could be anything from about 1530 to 1600. There’s no doubt if you compare Raphael’s Madonna della Sedia from 1513-14 with Caravaggio’s Narcissus (see below) from eighty years later, that the changes are so great that the latter painting has ceased being Renaissance in any sense.

The aims in Renaissance painting had been the realism of natural appearance, celebrating the ideal concept of beauty, precise perspective projection, balance and proportion. Brushwork wasn’t something the viewer should ever be aware of, sfumato was admired, while scumbling and impasto could only detract from the perfect Renaissance image.

In Parmigianino’s Mystic Marriage of Saint Catherine (c 1527-31) fine perfection has given way to obvious brushstrokes. This is no longer a finely crafted image, but visibly painted. A few years later, he exaggerated the neck of the Virgin Mary in what has become known as the Madonna with the Long Neck (1534–1540), which for many marks the start of the terminal phase of the Renaissance, or Mannerism.

For well over a century, Florence had been the undisputed engine of Renaissance painting. The balance now shifted to other centres such as Bologna and, most of all, Venice, where the effects of colour (Italian colore) came to dominate form and design (Italian disegno).

Jacopo Tintoretto’s Crucifixion (1565) is over 5 metres (17 feet) high, and 12 metres (40 feet) across, larger than many frescoes of the Renaissance. He makes use of this space with a narrative technique based on the popular ‘multiplex’ form: its single image shows events at more than a single point in time, in an ingenious and modern manner.

Naturally, the painting centres on Christ crucified, but the two thieves executed beside him are not shown, as would be traditional, already hanging from their crosses. Instead, to the right of Christ, the ‘bad’ thief is still being attached to his cross, which rests on the ground. To the left of Christ, the ‘good’ thief is just being raised to the upright position.

Spaced out around the canvas are relevant sub-stories from that whole. At the foot of Christ’s cross is his group of mourners, including the Marys. Each of the crosses has attendant workers, busy with the task of conducting the crucifixion, climbing ladders, hauling on lines, and fastening each victim to his cross. This mechanical and human detail brings the scene to life, adding to its credibility and grim process.

Fifteen years later, another Venetian master Paolo Veronese scumbled the highlights of fabrics in his Judith and Holofernes (c 1580) (detail below). Again its composition and use of a near-black background give it a decidedly Mannerist look.

Tintoretto’s Annunciation is thought to have been painted shortly after that, in about 1582. Its composition is unusual by any contemporary standards, with natural rendering of brickwork, a wicker chair, and a splendidly realistic carpenter’s yard at the left. This is coupled with an aerial swarm of infants, at the head of which is the dove of the Holy Ghost in a small mandorla. Christ’s origins are here very real, tangible, and contemporary, in stark contrast to most traditional depictions of this scene.

If any single workshop brought the Renaissance to a close and moved on to what has become termed the Baroque it’s that of the Carraccis, initially in Bologna, then in Rome.

One of the frescoes in the Palazzo Magnani in Bologna, probably painted by Ludovico Carracci and/or Annibale Carracci, shows the She-Wolf Suckling Romulus and Remus (1589-92), telling an early part of the legend of the twin brothers who allegedly founded Rome.

Annibale Carracci’s Latona and the Lycian Peasants, probably from 1590-1620, is the first truly masterly painting of this myth told in Ovid’s Metamorphoses, and for once an easel painting on canvas rather than a fresco.

If there’s one artist who clearly defined the start of a new era it was Caravaggio, who began his career in Milan, but transformed art when he was painting in Rome.

And if there’s one painting that displays the strengths of his masterly chiaroscuro, it’s Caravaggio’s Narcissus (1594-96).

Caravaggio wasn’t alone. Among those who adopted and developed his style, the Caravaggists, was Lavinia Fontana, who came from Bologna and worked at the height of her career in Rome. Her Judith with the Head of Holofernes from 1600 also contrasts completely with the tondo Madonna by Raphael at the start of this article.

There was, of course, much more to the Baroque than Caravaggism. In 1604-06, Annibale Carracci and Domenichino (also from Bologna) joined forces in the Palazzo Farnese in Rome to paint this fresco of Perseus and Phineas. As Perseus stands in the centre brandishing the Gorgon’s face towards his attackers, Andromeda and her parents shelter behind, shielding their eyes for safety. The Renaissance was in the past, and Florence was no longer the beacon that it had been.