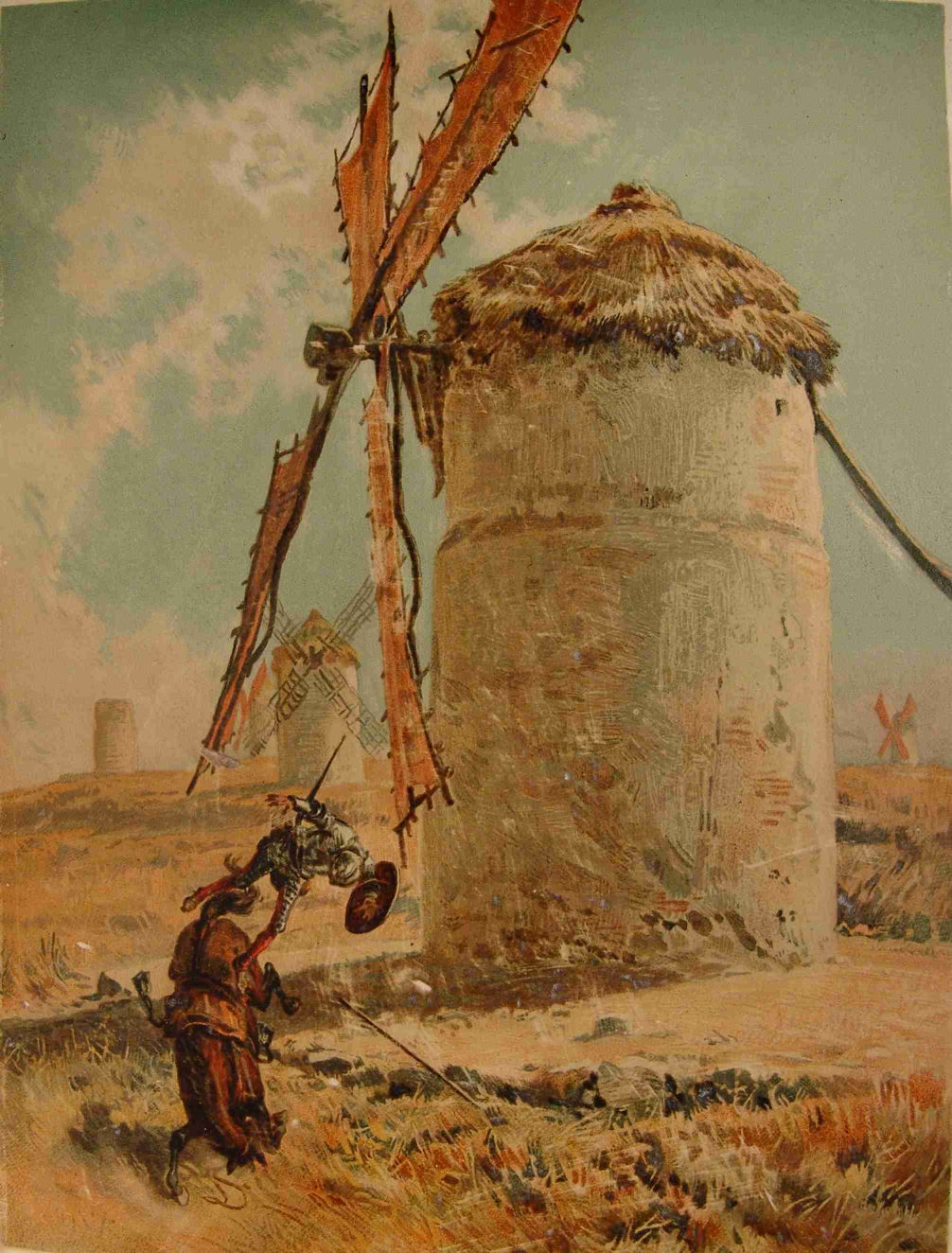 In the previous episode, Don Quixote had tried ineffectively to stop a youth being beaten, and picked a fight with a party of merchants from Toledo. Just as he was charging one of them, his horse Rocinante tripped and fell. One of the group them broke his lance and used it to beat him black and blue. He was taken home on a neighbour’s donkey, and took to his bed to recover. While he was asleep, his friend the priest and others raided his library and piled almost all of his books out in the yard for burning, in a bid to rescue him from his madness.

The priest’s scrutiny of Don Quixote’s library was brought to an abrupt end with the hidalgo’s bellowing. He settled back to sleep once he’d been fed, and later the housekeeper burned the books to ashes. Worrying that their absence would distress Don Quixote, the priest had the door to the library sealed off and hidden. When he was feeling better and left his bed, that confused Don Quixote no end. His niece told him that his library had been taken away by an enchanter, which only fuelled his madness.

Don Quixote remained at home for another fortnight, during which he convinced an empty-headed farmer named Sancho Panza to become his squire. To support the farmer’s family during their absence, Don Quixote raised some money. He also borrowed a shield for him.

Late one night, without bidding any farewells, they rode out together, Sancho Panza on a donkey with saddlebags, and Don Quixote with a stock of fresh shirts.

As they were riding across the Plain of Montiel, they came across thirty or forty windmills., which Don Quixote misinterpreted as giants which he had to defeat. His squire replied simply “What giants?” But his knight was convinced that their sails were mighty arms, and spurred Rocinante into the attack on the first of them, ignoring the cautionary cries of Sancho Panza.

As Don Quixote’s lance engaged with the sail it was shattered into pieces, and the turning sail dragged the knight and his charger, throwing him sprawling to the ground.

His squire reminded his master that he’d told him that they were windmills, to which Don Quixote replied that matters of war are in continual change, and the same magician who had stolen his library had now turned the giants into windmills.

Sancho Panza helped his master up, he remounted Rocinante and they rode off, Don Quixote lecturing his squire about the deeds of other knights. Sancho Panza then ate lunch in the saddle as they rode across the plain until they settled for the night under some trees. Don Quixote fashioned himself an improvised lance from a dead branch.

The following morning the knight refused breakfast, but his squire took another swig of wine from his leather bottle before they headed to the Pass of Lápice, which they sighted that afternoon. They next came across two Benedictine friars riding mules, following whom was a coach escorted by four or five horsemen and two footmen. Inside the coach was a Basque lady travelling to rejoin her husband in Seville so that they could go on to America.

Don Quixote immediately associated the friars, who were travelling separately from the coach, as enchanters who were abducting the princess in the coach. Sancho Panza could see what was coming and muttered, “This’ll be worse than the windmills”.

Don Quixote blocked the road in front of the friars and accused them of abduction. Ignoring their response, he then charged at the first, who had to throw himself from his mount as the other friar galloped away as fast as his mule could manage. Sancho Panza ran over to the friar who was on the ground and started trying to take his clothing; for this the friars’ servants knocked him down and gave him a good kicking, while the friar shot off in the other direction to his companion.

While his squire was still lying senseless on the ground, Don Quixote was talking to the lady in the coach. One of her Basque escorts rode up on his mule, seized the other end of the knight’s lance, and told him to clear off. After an angry exchange in broken Spanish, Don Quixote attacked him with his sword. As their fight intensified, the lady in the coach had it driven away so she could watch from a distance. The Basque and the knight then headed towards one another with their swords raised, each ready to cleave the other in two – at which point Cervantes ends the chapter, and the first part of this book.

That completes the eighth chapter of the first book of Don Quixote.