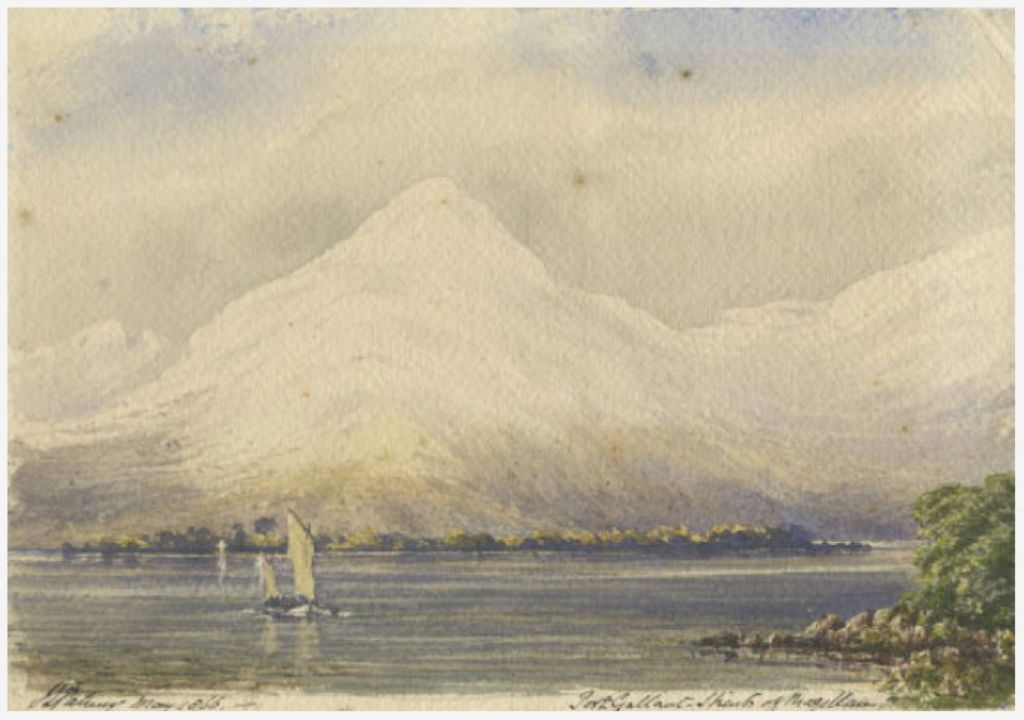 Life as a ship’s surgeon on board a warship normally afforded plenty of time and opportunity for activities such as painting and drawing. During the nineteenth century, in particular, this enabled some to paint remote parts of the world. It’s with great pride that this week I show some examples of the art of John Linton Palmer (1824-1903), Staff Surgeon in the Royal Navy. Although images of his accessible paintings are small, I hope that they do him justice.

Palmer’s career in the Royal Navy started in 1849, when he was first commissioned as an Acting Assistant Surgeon to HMS Victory, Nelson’s former flagship which is now preserved in Portsmouth Dockyard, a few miles from here, on the Hampshire coast, England. By about 1850 he was serving afloat in the Pacific, and in 1851 was appointed to the Pacific fleet’s flagship under Rear Admiral Moresby.

From early in his career, Palmer seems to have sketched wherever he found interesting subjects, as in this Sketch from Vancouver Island from 1851. He was fascinated by the peoples as much as the places, although his interest in ethnography appears to have been amateur.

In the same part of Vancouver Island, during the summer of 1851, he made this sketch of A Clallam Mat Lodge Village near Fort Victoria. Clallam County is opposite Victoria, in the Olympic National Park, Washington.

He painted this Gully at Chigareni Bay, Fonseca, Central America, Honduras (1852) the following year. This is in the Gulf of Fonseca, on the Pacific coast of central America.

During the 1860s, he saw a lot of the world, including the Far East and China, where he painted avidly. In 1866, now commissioned as a full Surgeon, he visited Easter Island, on board HMS Topaze.

Palmer returned to central America in 1866, when he painted this view From the top of the Huaca de Apacote, and the ruins of an Inca camp and village. Most of his landscapes show marked formal aerial perspective, suggesting that he had undergone instruction at some time during his youth.

Sailing further south, he reached southern Chile, where he painted A ‘canal’ at Port Mouth, South Chile (1866). These are naturally-occurring waterways which dissect much of the coast in this area.

The extreme southern tip of South America had been extensively explored over previous centuries, but the Strait of Magellan wasn’t surveyed by the Royal Navy until the 1860s, when HMS Nassau undertook the task, with a naturalist instructed by Charles Darwin on board. Even now, this is remote and a serious part of the world to sail.

Looking west from Cape Froward, Straits of Magellan (1866) was painted from the southernmost point of mainland South America. This must have been painted during a period of unusually fine weather.

Lagoons at Supé (1868) was painted during a later trip, and shows his strong aerial perspective.

Palmer retired from the Royal Navy in 1874, at the age of fifty, and seems to have settled down quietly somewhere, perhaps to tell his grandchildren of his adventures. He died in 1903, at the age of about 79.

Many of his surviving paintings are now in the collection of the Royal Geograhical Society in London.

Why my pride? I served as a medical officer in the Royal Navy, commissioning in 1977, and retiring in 1996. And in 1984, I was privileged to spend nine months ashore in the Antarctic, on a Joint Services Expedition.