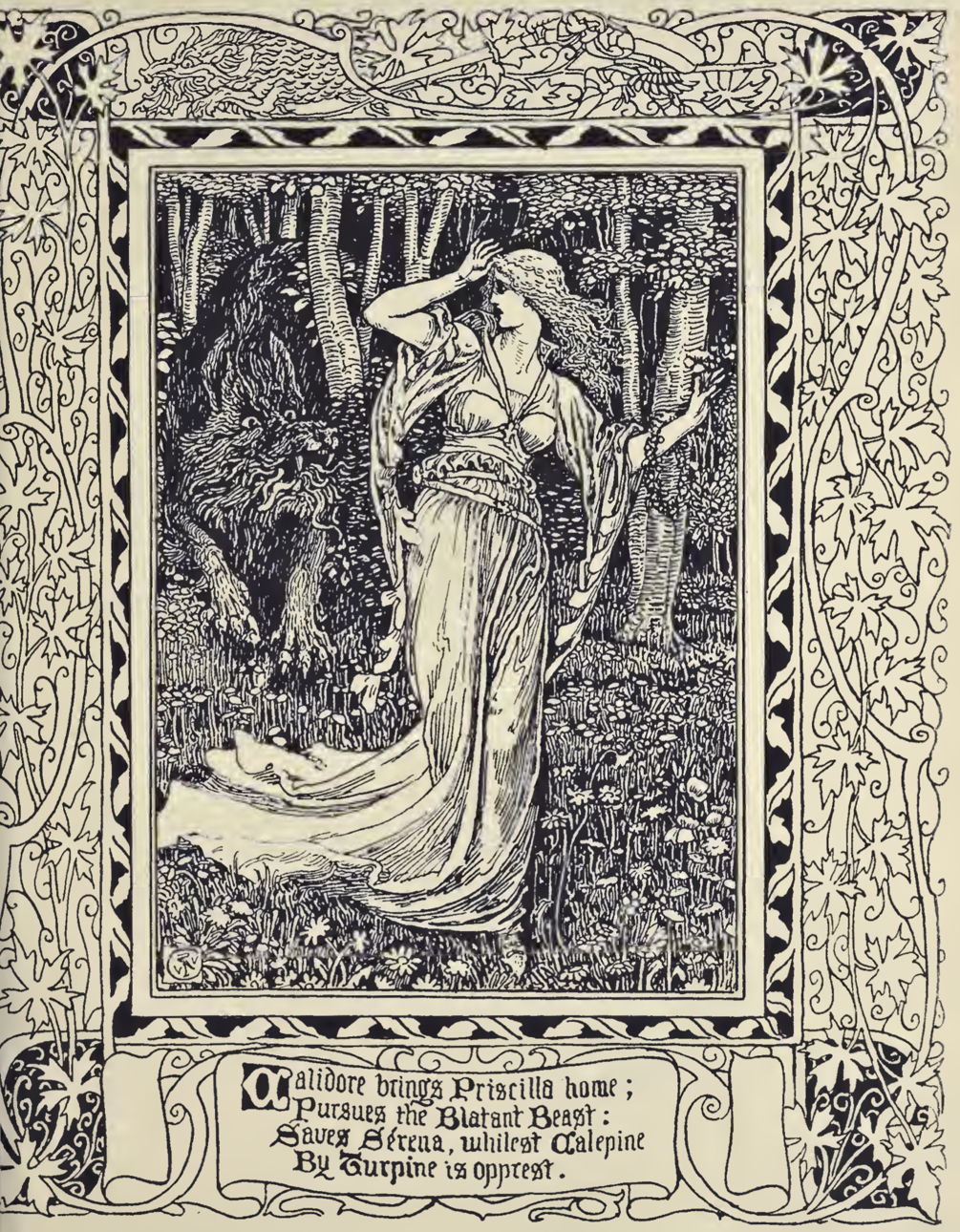 The last episode completed The Legend of Artegall, or Of Justice, so reaching the end of the fifth book of The Faerie Queene. This episode starts the sixth book, which is The Legend of Sir Calidore, or Of Courtesy. It’s important to realise that, to Spenser, the word courtesy meant much more than just being polite, and included compliance with the code of chivalry and the behaviour expected at court.

Book 6: The Legend of Sir Calidore, or Of Courtesy

As Artegall is riding back to the Faerie Queene’s court, he meets Sir Calidore, who is riding out in quest of the Blatant Beast. Artegall tells Calidore of his recent encounter with that monster, and the two head off in opposite directions.

Calidore then finds a young squire bound to a tree, and calling for help. When the knight releases him, that young man tells him of a nearby castle owned by Briana, who loves Crudor, a knight who had refused to return her love until she had given him a robe lined with hair from the beards of knights and the heads of their ladies. To meet his demand, Briana had installed a seneschal, Maleffort, who stops all passing knights and their ladies and requires their hair. This happened to the young squire, whose lady had run off, and her screams for help can still be heard as the seneschal pursues her for her hair.

When Calidore reaches the squire’s lady, Maleffort is dragging her by the hair to his castle. The seneschal and knight fight, and despite the former’s initial fierce attacks, Maleffort soon flees back to his castle. Just as he’s about to enter, the knight catches and kills him. Calidore goes to Briana in her Great Hall where she warns him that her beloved will punish him. He then waits there while a dwarf is despatched to fetch Crudor.

Once Crudor arrives, Calidore rides out to fight him. They knock one another from their mounts with their lances, then battle on foot with swords. Calidore soon strikes Crudor a mighty blow on the head, putting him on the ground. When Calidore removes his opponent’s helmet to administer the fatal stroke, Crudor begs for mercy. The victor grants that on the terms that he learns his lesson and shows due courtesy. They bind this with an oath, and Calidore tells the knight to wed Briana. The couple offer the castle to Sir Calidore, but he hands it over to the young squire and his lady in recompense for their suffering at the hands of Maleffort.

Calidore sees young Tristram slay
A proud discourteous knight,
He makes him Squire, and of him learnes
his state and present plight.

Back on his journey, Calidore next comes across a hunter armed with only a boar-spear who is fighting a mounted and fully armed knight. As he draws near, the hunter brings the knight from his saddle and kills him. When Calidore admonishes the hunter for ignoring the laws of chivalry, the young man tells him it was the knight who had attacked him first, as confirmed by the late knight’s lady. She had been walking as her knight remained on horseback, he striking her whenever she slowed or stumbled. The lady also tells him that her knight had earlier attacked and killed an unarmed knight.

Sir Calidore apologises to the youth, and withdraws his criticism. The young man tells Calidore that he is Tristram, son and heir of the late king of Cornwall whose throne had been taken over by his uncle. His mother therefore sent her son to the land of Faery for his safety. After schooling and training, he had taken up arms to become a knight. At this, Calidore offers him the role of squire, taking the armour and arms of the dead knight, as is due. Tristram then swears the oath of chivalry to serve Calidore.

However, Calidore explains that Tristram can’t join him on his current quest, which he has been directed to undertake alone. The knight then instructs his new squire to keep the lady safe, and they separate.

Further on, Calidore comes across a badly wounded knight without any armour, whose lady is trying to control the bleeding from his wounds – this is the same couple Tristram had described earlier. Calidore explains that the attacker is now dead, and the two of them place the wounded knight on Calidore’s shield and carry him to a nearby castle.

Sir Calidore is welcomed at the castle by Aldus, an old knight who turns out to be the casualty’s father. The wounded knight is Aladine, and his lady Priscilla, daughter of the local high lord, who wanted her to marry another noble, but she fell in love with her knight. She blames herself for her lover’s injuries as they were due to meet in the forest where Aladine was attacked.

The following day, Aladine is much better, so Calidore sets out with Priscilla to return her to her father. They pass by the place where Tristram had killed the knight, where Calidore pauses to cut the head from the corpse to take with him to prove his account to Priscilla’s father. With Priscilla back in the safety of her father’s house and his explanation gratefully accepted, Calidore once again resumes his quest.

As Calidore is riding past a secluded glade, he sees a knight and his lady resting there, to their embarrassment. He stops to talk with this knight named Calepine and his lady Serena, only to be interrupted by the sudden appearance of a wild beast which snatches her up in its jaws and runs off. Both knights give chase, Calidor overtaking it rapidly. Seeing him, the Blatant Beast drops Serena and flees in fright.

Leaving Calepine to tend to his lady, Calidore continues his pursuit of the beast through woods, over fields, and far into the distance.

Calepine sees that Serena is bleeding heavily from great gashes inflicted by the beast’s fangs, so puts her on his horse and leads it to seek aid. As it’s getting to the end of the day, he reaches a swift river which separates them from a large castle. As Calepine is considering the best way to cross, an armed knight rides up, his lady accompanying on her palfrey. Calepine asks them if he can join that knight on his charger as they lead his horse, carrying Serena, through the river. To his surprise, the other knight rudely refuses to help, so his lady offers her palfrey. Now angry, Calepine politely declines, and leads his horse across, then challenges the other knight to face him on foot.

That knight refuses his challenge, and rides off to enter the castle. When Calepine reaches it, his request for admission and aid is refused until he has done battle with the lord of the castle. When Calepine points out his predicament and Serena’s wounds, and the fact that he seeks hospitality under the code of chivalry, the porter tells him that his master, Sir Turpine, had once been wronged by another errant knight, so made his rule. Calepine asks the porter to request shelter overnight for his lady before he does battle in the morning, but Sir Turpine – the same knight who had already rebuffed Calepine on the other side of the river – refuses, forcing him to care for the wounded Serena outside through the night.

At first light, Calepine places Serena back on his horse, only to see Turpine charging at him with his lance at the ready. Being on foot, there’s little Calepine can do to protect himself, and eventually Turpine’s lance buries deep into the knight’s shoulder, causing profuse bleeding and putting him in grave danger.

Sir Artegall, a mighty and good knight, with a deep sense of justice, who is betrothed to Britomart, but cannot marry her until he has completed his quest for Irena. The subject of the fifth book. Taken to represent Lord Grey of Wilton, whom Queen Elizabeth sent to crush rebellion in Ireland, and the wisdom of fair justice.

The Blatant Beast, the object of Calidore’s quest. It has a thousand tongues and appears dragon-like. At the end of Sir Artegall’s quest in Book 5, he met the Beast, but passed by it with calm resolution

Briana, a lady who fell in love with Crudor, but he refused to return her love until she gives him a robe lined with the hair from the beards of knights, and the heads of their ladies. She instructs her seneschal Maleffort to obtain the hair from all those knights and ladies who pass her castle.

Calepine, a courteous knight, whose lady is Serena.

Sir Calidore, the most courteous and mild-mannered knight at the court of the Faerie Queene, he is despatched to deal with the Blatant Beast, but told that he must do so alone. The hero of Book 6.

Crudor, a knight loved by Briana. He refuses to return her love until she gives him a robe lined with the hair from the beards of knights, and the heads of their ladies.

Maleffort, Briana’s seneschal, charged with obtaining hair from the beards of all passing knights and from the heads of their ladies.

Serena, Calepine’s lady, who is carried off and badly wounded by the Blatant Beast.

Tristram, son of the late king of Cornwall, whose kingdom was taken by his uncle. His mother took him to the land of Faerie for his safety, and he is there trained in hunting and knightly matters. He sets out to become a knight, and proves skilful and valiant in battle.

Sir Turpine, the most discourteous knight imaginable, he refuses to provide hospitality to other knights even when they’re in distress, and hurls abuse at them. Lives in a grand castle with his sickly lady.