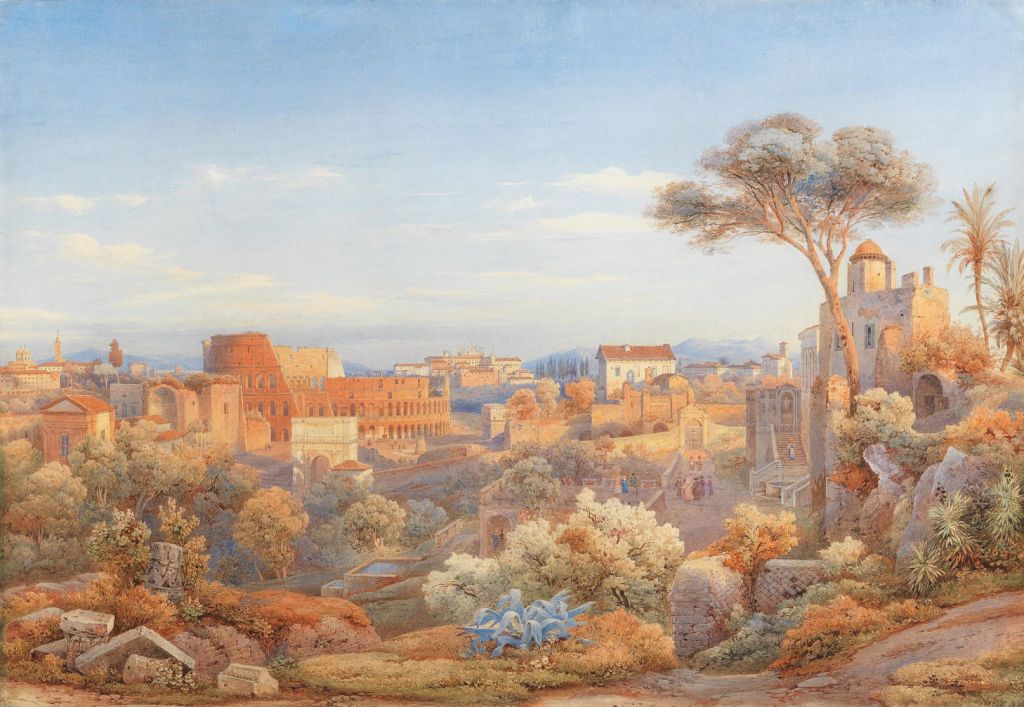 The dominant ruin of classical times which still towers over the city of Rome is its Colosseum. The largest amphitheatre in the ancient world, it wasn’t known as the Colosseum until after it had started to fall into ruins.

It was also, for its time, a thoroughly modern building, being constructed of limestone and rocks together with concrete faced by bricks. It’s far more recent than many of the well-known landmarks from ancient Rome, as its construction started in 72 CE under the emperor Vespasian, and completed eight years later under Titus.

It’s situated close to the well-known Circus Maximus, which provided a larger arena more suited to events such as chariot races, and capable of being flooded for naval battles. On the map above, the Colosseum is marked in red, to the south-east of the Forum.

In its heyday, the Colosseum was probably partially covered by a Velarium, as shown in this model.

The great majority of paintings of the Colosseum show it in ruinous state, but since the nineteenth century some artists have attempted to show its interior reconstructed and in use.

The first attempt at a spectacular reconstructed view seems to have come in 1836, in Alexey Tarasovich Markov’s Eustace Placido in the Colosseum, showing the martyrdom of Saint Eustace, although other traditions claim that he and his family were roasted to death inside a bronze statue of a bull, on the command of the emperor Hadrian in 118 CE. Note the Velarium above, which resembles that in the more recent model.

By far the most famous of these reconstructions is that of Jean-Léon Gérôme in his spectacular Ave Caesar, Morituri Te Salutant from 1859.

Its story is simple, going no deeper than a translation of its title: Hail Caesar! We who are about to die salute you. A group of gladiators clustered in front of Caesar are just about to join the bodies of the last ones, who are still being dragged away by slaves. Some consternation was raised in Gérôme’s depiction of the Vestal Virgins – carefully positioned between the gladiators and Caesar – watching and enjoying such a depraved spectacle.

Despite its popular appeal, there is more to Ave Caesar than its expansive view and the roar of the crowd. The viewer is, as in so many of Gérôme’s paintings, not only looking at the spectacle, but also at those looking at the spectacle, ultimately themselves. This painting was so successful that Goupil continued to sell reproductions of it, some as small as a calling card, for the next fifty years.

There are other paintings of the interiors of intact amphitheatres, but few depict a building resembling the Colosseum itself.

As Maarten van Heemskerck shows in his Bullfight in the Ruined Colosseum from 1552, it continued to be used in its ruinous state for public events.

Claude Lorrain’s Capriccio with the Ruins of the Roman Forum from about 1634 shows how, for many centuries, the ruins of the Colosseum were surrounded by open land, and other remains from the Roman Empire.

Rome, and its classical ruins, were on the schedule for many of the great landscape painters who learned their art and craft in its Campagna. Among them, the Dane Christoffer Wilhelm Eckersberg painted two views of the interior of the Colosseum in 1815-16. That above shows a quiet moment of prayer for the appalling succession of martyrs and others who were killed there over the years.

Salomon Corrodi’s undated watercolour View of Rome with the Colosseum and the Roman Forum is both beautifully lit and an accurate topographic view of the Colosseum in its more recent urban setting.

The Colosseum typified the city and empire of Rome at that time: it was financed by the spoils robbed from the Temple of Jerusalem after the first Jewish-Roman War in 70 CE. Many of the spectacles which took place in it involved suffering and death, although not all reflected the worst excesses of the day. It was instrumental in the oppression of Christianity. In spite of that, it has been a model for countless buildings across Europe and North America, from theatres with stages to those used for anatomy lectures: success out of excess.