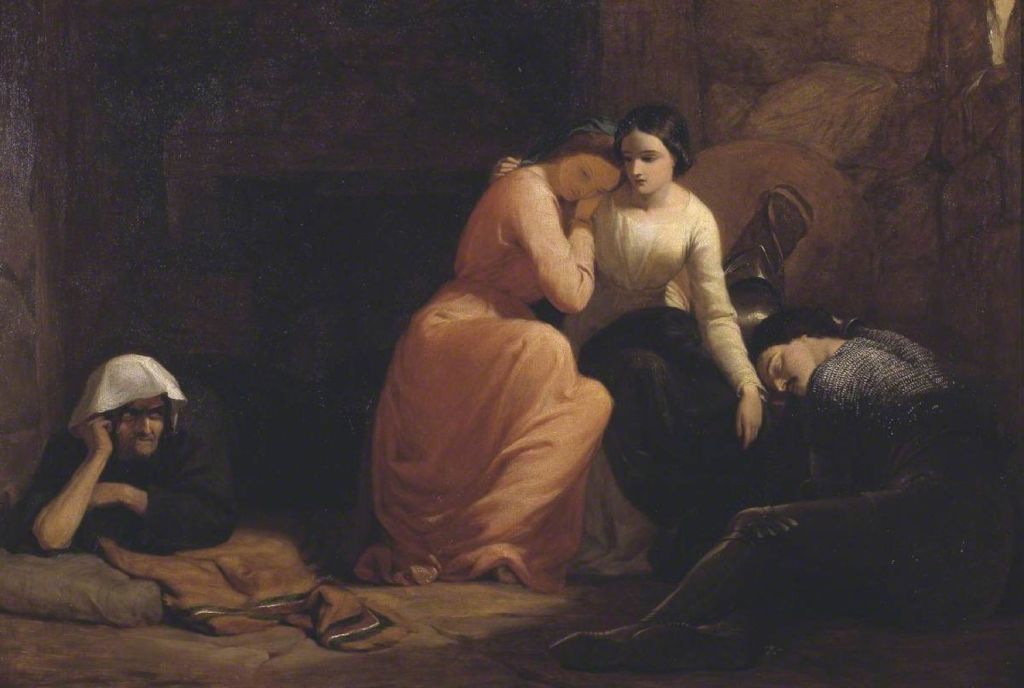 In the previous episode, after attending Satyrane’s tournament, the knights Artegall, Scudamour and Britomart met when fighting one another. Artegall and Britomart fell in love at first sight and agreed to marry, but he has a dangerous quest of his own to complete before they can wed, so he rode off alone. Britomart joined Scudamour in search of his beloved Amoret.

Amoret rapt by greedie lust
Belphoebe saves from dread,
The Squire her loves, and being blam’d
his dayes in dole doth lead.

Amoret had wandered off while Britomart was sleeping, and came into grave danger from a hideous monster which emerged from the undergrowth. She fainted in shock, only to be carried off by the vile creature to its cave, where it flung her inside and sealed the entrance with a large boulder. Amoret later wakes in terror and hears the sobbing of another woman in the dark. This is Aemylia, who tells Amoret that the monster deflowers virgins and eats them. Over the last twenty days, it has apparently got through seven women, leaving only the two of them, and an old woman who is also hidden there in the darkness. They are on the beast’s menu for tomorrow.

Aemylia continues, saying that she had fallen in love with a lowly squire, and been forbidden from marrying him, driving them to elope. When she had arrived at their secret rendezvous the monster had carried her away before her lover had got there. As they are speaking, the beast returns, rolls back the boulder and enters the cave. As he does so, Amoret wastes no time and bolts past its loathesome body and out into the forest, with the creature in pursuit.

Belphoebe the huntress hears Amoret’s cries, but it’s her companion Timias who reaches the maiden first, just as the monster is about to carry Amoret away again. Timias uses his boar spear to force the beast back, but it retaliates with a heavy club, using Amoret as a shield. The squire keeps trying to wound the monster, and finally succeeds, drawing black blood from its side.

The monster casts Amoret aside and strikes violently at Timias with its club, forcing him back. Belphoebe arrives, at which point the beast flees back to its cave. Just as it’s about to enter that rock protection, she looses an arrow which transfixes its neck, killing it instantly.

Belphoebe quickly rescues Aemylia and the old woman from the depths of the cave. Amoret then faints away into Timias’s arms, as he looks adoringly at her.

Belphoebe taunts Timias for his faithlessness, and runs off, disappearing back into the forest. Timias is dismayed and upset by her sudden departure, and wonders off to destroy his weapons and rend his garments. He eventually builds himself a small hut, where he lives off the land. One day, Prince Arthur comes across this cabin, but seeing Timias thin and long-haired, he doesn’t recognise his own squire. It’s only when Arthur sees the name of Belphoebe carved on all the trees around the hut that he understands what has happened.

At first she doesn’t recognise him, but he explains that she was the cruel woman who drove him to his present state. They are reunited in love, and live happily together in the forest thereafter.

Arthur, who still believes Timias to be lost, meets Amoret and Aemylia as they’re wondering around the forest, lost, and places them both on his horse. As they journey on towards safety, they see a small cottage occupied by a foul hag named Sclaunder, who abuses all that is good by defaming them. After she welcomes them in for the night, she spends much of the evening cursing them for lodging there without her agreement.

The following morning, when they depart, the old woman chases after them hurling abuse, calling the two maidens whores. They’re finally glad to see the back of her.

As they ride on towards safety, they next come across a young squire and a dwarf whose horse is galloping away from a giant in pursuit of them. Arthur puts the two women down and heads towards the giant, who is riding a dromedary and brandishing a huge iron mace. As he reaches them, the giant’s mace strikes a glancing blow to Arthur’s shield, which protects the squire. As the giant starts raining blows on Prince Arthur, the latter first dodges then cuts clean through the giant’s neck with his sword.

With the giant’s huge body lying dead, the squire introduces himself as Placidas, and tells his story. His close friend, another squire named Amyas, had been in love with a lady of high birth, but she had been forbidden from marrying beneath her. When the couple were about to elope, Amyas had been captured by that giant, Corflambo, whose burning eyes kindled lust in both men and women. The giant’s beautiful daughter Poeana had fallen in love with Amyas, who had fought to remain true to his own love.

Placidas found Amyas held captive, with the dwarf as his jailer. The young squire then pretended to fall in love with Poeana, and seized the opportunity to escape with the dwarf. Corflambo pursued them both, until they came upon Prince Arthur. With this, Aemylia recognises Amyas as the Squire of Low Degree whom she loved and was about to elope with. Arthur agrees to go and free her lover from Corflambo’s castle.

The Squire of low degree releast
Poeana takes to wife;
Britomart fightes with many Knights,
Prince Arthur stints their strife.

When Arthur reaches Corflambo’s castle, he finds Poeana plucking a harp and singing sadly to herself. The dwarf is told to open the dungeons, from which emerge Amyas and many other knights and squires. Amyas, Placidas and Aemylia embrace, as Poeana looks on trying to work out which is Amyas, and which Placidas. They rest a while at the castle, restoring peace there. With Amyas and Aemylia ready to get married, Placidas and Poeana agree to their own marriage, leaving them as the lord and lady of the castle and its estate.

Arthur and Amoret continue their journey, and come upon a fierce battle between the fickle Blandamour, lustful Paridell, misogynistic Sir Druon and the lecherous Sir Claribell on the one hand, and Britomart and Scudamour on the other. The latter pair had fought valiantly and their four opponents had not got the better of them. Arthur tries to stop the fighting, but the four turn against him instead of putting down their arms. Arthur is fresher than they, and starts to drive them back, before Britomart imposes a truce on them all.

The four knights try to excuse their actions, but Arthur sees through their pretence, and admonishes them for their attempt at dishonourable redress. With peace restored, the four ask Scudamour to tell them how he had gained Amoret’s love.

Aemylia, a fair maiden of high birth who falls in love with Amyas, a squire ‘of low degree’. Forbidden from marrying, they decide to elope, but end up being captured.

Amoret, or Amoretta, twin sister of Belphoebe, raised by Psyche as a paragon of grace and beauty, with only one true love. She’s abducted and tortured by Busirane.

Amyas, a young squire ‘of low degree’ who falls in love with Aemylia and decides to elope with her, as she is forbidden from marrying him. He is then captured by Corflambo. His close friend is Placidas, who appears almost identical.

Sir Artegall, a mighty and good knight, who is the subject of Britomart’s quest.

Prince Arthur, son of Uther Pendragon, bearer of a magic shield which blinds his enemies and turns them to stone, and future king.

Belphoebe, twin sister of Amoret, who prefers hunting to being at court. Raised by Diana as a huntress, she is adept with her spear, and bow and arrows.

Blandamour, a knight whose weaknesses are his inconstant nature and shallowness.

Britomart, or Britomartis, heroine of Book 3, “Chastity”, or faithfulness in true love. A woman knight and virgin, taken to represent the Fairy Queene herself, she has fallen in love with the image of the knight Artegall, and is in quest of him.

Corflambo, a giant with flaming eyes, who fills men and women with lust. His own daughter, Poena, is beautiful but wanton.

Florimell, another virgin in search of her true love, but passive and defenceless. She represents perfect beauty. Presumed eaten or killed by a witch’s monster, but in reality saved and a captive of Proteus in the depths of the sea.

Sir Paridell, a fickle knight from Gloriana’s court who falls in love with Hellenore, elopes with her, then abandons her.

Placidas, a young squire, close friend of Amyas, who looks almost identical to him.

Sir Satyrane, a good knight, who helped Una in the past.

Sir Scudamour, a good knight, whose lady is Amoret. He is plunged into grief when she is adbucted and tortured by Busirane.

Timias, Prince Arthur’s squire, a young man who falls in love with Belphoebe.