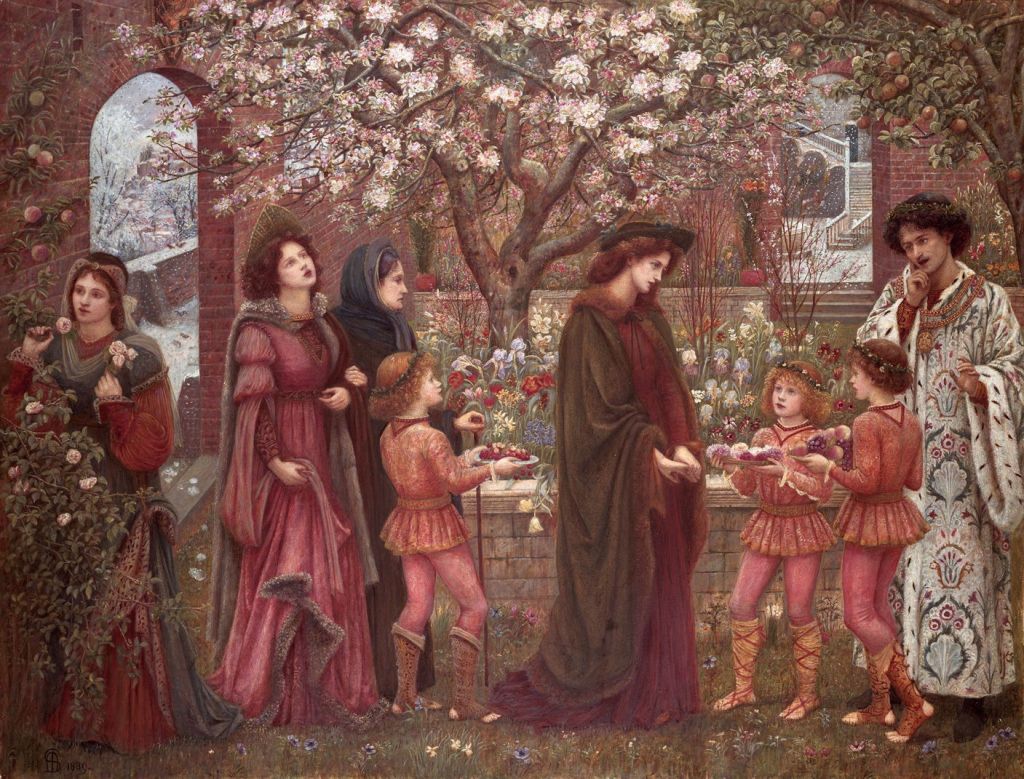 In 1886, Marie’s husband William Stillman was sent out to Italy again, this time to Rome, as its correspondent for The Times newspaper. The family followed him, allowing Marie to make friends with Giovanni Costa, a noted landscape painter. Costa took young Lisa under his wing, and mother and step-daughter exhibited with his Etruscan School, and the group of notable British artists under the banner of In Arte Libertas (which included Watts, Burne-Jones, and Frederic Lord Leighton).

In Dante’s Vision of Leah and Rachel (1887), she returns to her favourite Florentine author, and references Canto 27 of Purgatory, in his Divine Comedy. Dante is seen on the Seventh Terrace, representing the sin of lust. Just before the dawn of the Wednesday morning, when Dante and Virgil are sleeping on the steps between that terrace and Earthly Paradise, Dante experiences his third dream, a vision of Leah and Rachel. They are symbols of the active (lay) and contemplative (monastic) Christian traditions.

Stillman shows this fairly true to Dante’s verse, with the poet sat at the left, wearing his customary red chaperon, Leah in red, standing fashioning a garland of flowers for her head, and Rachel, as ever staring at her beauty in reflection. The whole is set in a northern Italian landscape, rising to the southern edge of the Alps in the far distance.

She stayed with Dante in Dante at Verona (1888), one of three related works which she submitted for the inaugural exhibition of the New Gallery, which succeeded the Grosvenor Gallery that year. Now she was back in Italy, such themes were only to be expected, but she accompanied this painting with a quotation from Dante Gabriel Rossetti’s popular poem describing Dante’s exile from Florence to the court of Verona.

Marie sets her version in the public garden in Verona, where “wearied damsels” request the poet to recite his early poem Vita Nuova. As previously, she takes the opportunity to reference three modes of art – poetry, music, and painting – and thereby evokes the Aesthetic, once again in a Pre-Raphaelite mediaeval setting.

In her First Meeting of Petrarch and Laura (1889), she goes back to one of Dante’s great influences, the Italian poet Petrarch (1304-1374), whose sonnets became a model for lyrical poetry through the Renaissance.

After Petrarch had given up his vocation as a priest, he saw a woman known only as “Laura” in the church of Sainte-Claire d’Avignon. She was apparently very beautiful, already married, and refused him – although it’s unclear whether Petrarch had any personal contact with her. It did though drive him to express his feelings in exclamatory love poems, and to condemn men who pursue women. Laura apparently died 21 years later, and Petrarch was consumed with grief. The poet is shown at the right, and Laura on the left, their looks and body-language following Petrarch’s account.

Stillman’s masterpiece The Enchanted Garden of Messer Ansaldo (1889) draws on another classic of Italian literature, Boccaccio’s Decameron, and was exhibited with a written explanation of the scene.

Ansaldo has been wooing Madonna Dianora, who tells him that if he could get flowers to bloom in the winter, then she would respond to his seduction. Here, surrounded by his enchanted blooming garden, and with snow on the ground outside, Ansaldo (at the right) has invited Dianora (just right of centre) and her entourage to see. Dianora is then torn between her honour as a married woman, and her promise.

Stillman painted this when in London, and exhibited it at the New Gallery later that year. Failing to sell it in the UK, she took it with her to the US in 1900, where it was bought in Boston by a distant relative of her husband. The painting then disappeared until it was re-discovered in the 1980s. It’s therefore unclear whether it could have influenced JW Waterhouse, who painted a similar work in 1916-17.

Cloister Lilies (1891) seems altogether plainer in its reading. A beautiful young woman rests in thought, holding lilies (symbols of purity), with beads (rosary, for prayer) and an illustrated book. Although this appears set within the walls of a convent (probably based on one in Florence), she is not (yet) a nun herself. When first exhibited at the New Gallery in 1892, it was accompanied by lines from Edward FitzGerald’s popular translation of the Rubáiyát of Omar Khayyám – hardly a model for the contemplative life of a nun – which lament the passing of beauty and youth.

Stillman became even more enigmatic in her treatment of the hugely popular theme of Saint George (1892) – long tackled through his hagiographic achievement of killing a dragon. What she appears to have done is to ignore that established if not ingrained tradition, and painted an icon of him, poised with lance and shield.

How the Virgin Came to Brother Conrad of Offida and Laid her Son in his Arms (1892) is one of a small group of religious works, of which two were drawn from the legends of the life of Saint Francis of Assisi. Marie loved the Italian text of The Little Flowers of Saint Francis, on which they are based.

This painting shows Friar Conrad (kneeling), who took himself to a wood to meditate on God, only to experience a vision of the Virgin Mary in response to his prayers to her. His colleague Friar Peter (at the left edge) witnessed this from his hiding-place nearby. Stillman’s composition was discussed in correspondence with Edward Burne-Jones, who approved of it, and she painted it during the winter of 1891-92, when in Rome. Although too late to be exhibited at the New Gallery, she sent it to Liverpool instead.

In 1893-4, she painted a series of fine Italian landscapes in the company of Giovanni Costa.

A Lady with Peacocks in a Garden, an Italianate Landscape Beyond (1896) sets the full-length figure of a woman ascending steps, to reach three peacocks, against a superb background of the Italian countryside at dusk.

Beatrice (1896) refers to Dante’s Vita Nuova, through Dante Gabriel Rossetti’s popular translation into English. In this her first version, she shows Dante’s beloved Beatrice lost in contemplation while reading, an intimate insight set firmly in the Pre-Raphaelite mediaeval. This was exhibited at the New Gallery later that year.

This detail view of Beatrice provides more insight into her watercolour technique, which better resembles that of oil painting.

In 1898, William Stillman finally retired from The Times, allowing the family to move back to England, where they had a woodland house built for them in Frimley Green, Surrey – an affluent and then rural area well to the south of London. She was then better able to put her paintings into the UK market again, and renewed her visits to Kelmscott Manor. However, sales of her paintings remained slow.

Her husband died in 1901; her step-daughter Bella’s husband had died in 1896, at the age of only 49, following an accidental overdose of morphine, so the two moved to live together in Kensington, London.

She painted many views of Kelmscott Manor, the residence of William and Jane Morris, and centre of the Arts and Crafts Movement. The Manor was originally built in stone in about 1600, and nestles in countryside near the River Thames, to the west of Oxford. Among its many features is a walled garden, which Stillman found secluded and peaceful.

Kelmscott Manor: Feeding Doves in Kitchen Yard (1904) is possibly her finest view of the house, with a woman on one knee on the crazy paving slabs, her right arm held up to feed one of the white doves from its flock.

Kelmscott Manor: The Long Walk (1904) is another wonderful view. The woman shown is clutching lilies in her left hand, as a symbol of purity, and her head is covered as if she was from mediaeval times, not the early twentieth century.

Stillman returned to the US in 1908, where she held a solo exhibition in New York.

The Pilgrim Folk (1914) may well have been her last major painting, and is a valediction to Italy, which had influenced her so much. It again refers to Dante’s Vita Nuova via Rossetti, a quotation from which was shown with the painting. That passage contains Dante’s account of Beatrice’s death to a group of newly-arrived pilgrims.

Dante leans out from a window at the left, addressing three pilgrims below. At the lower left corner, the winged figure of Love crouches in grief, poppies scattered in front of him. Pilgrims around the well are taking refreshment after their travels, and more are arriving through the alley beyond. Black crows fly in flocks above, symbolising death. The landscape behind is very Italian, and the whole has a fairy-tale unreality about its mediaeval details. This painting was completed prior to the outbreak of war, but was not exhibited until 1919.

After the First World War, she resumed painting in earnest, and continued to paint actively until shortly before her death. She visited the US again in 1923, and died in London in 1927.

Her obituary in The Times (for which her husband had written so much) seems to have decided her fate in the history of art, though: it dwelled on her beauty, grace, and charm. Its single short paragraph about her art described it as a leisuretime activity. No catalogue raisonné of her work has been attempted, but more than 150 paintings of hers are known or survive, from a career which lasted about sixty years, during which her paintings were exhibited throughout the UK, in France, Italy, and Boston and New York in the USA.

If any of the Pre-Raphaelite Sisterhood should rank alongside its original Brotherhood, surely she should be Marie Spartali Stillman, one of the great British painters of the nineteenth century.

Delaware Art Museum, in Wilmington, Delaware, has one of the best public collections of Marie Spartali Stillman’s paintings. This compares, for example, with London’s Tate Gallery, which has none at all.

Frederick MS & Marsh J (2015) Poetry in Beauty: The Pre-Raphaelite Art of Marie Spartali Stillman, Delaware Art Museum. ISBN 978 0 996 06761 4. Astonishingly, few other books on the Pre-Raphaelites even mention her, and if they do it is as a model and member of the circle.