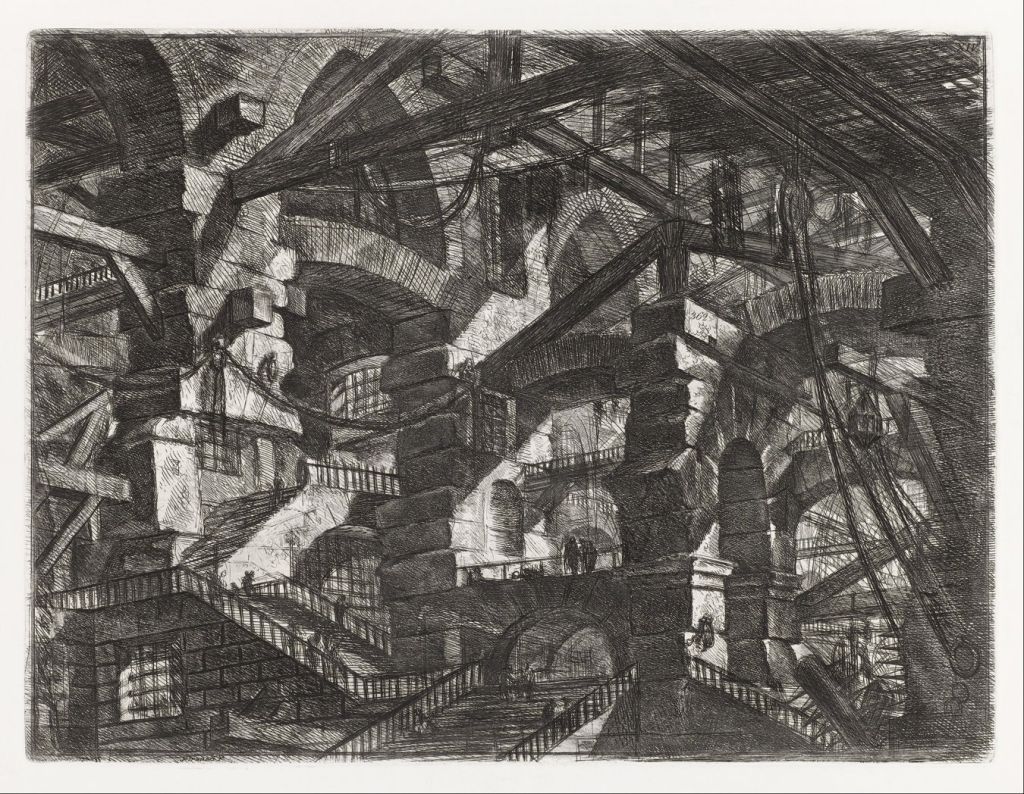 In the first article about the art of Giovanni Battista Piranesi (1720–1778), to celebrate today, the three-hundredth anniversay of his birth, I looked at his career and works, except for his series of etchings of Imaginary Prisons which he made between about 1745-50. Those extraordinary prints are the subject of this article.

Piranesi is thought to have started work on this series in about 1745. I like to think that they originated in the doodles of an architect who had a particular interest in the classical ruins of Rome. Inspired perhaps by flights of fancy from trying to reconstruct old ruins in his mind, he must have given his imagination free rein.

Their style is far freer and more sketchy than his normally tight and precise marks in his published engravings of Roman antiquities, and from some of the more detailed descriptions, he used chemical methods of toning too.

These engravings were published in two editions during his lifetime. The first, in 1750, consisted of 14 first state prints. In about 1760 he revised those originals, adjusting some of their projections to form impossible geometries, and adding two further etchings. Those were published in a second edition in 1761. They have since been reprinted in many different editions, and are believed to have formed inspiration for Gothic-Romantic and Surrealist artists in all media. The visionary British poet Samuel Taylor Coleridge (1772-1834) referred explicitly to them forming a part of his creative process.

The title page differs considerably between the two editions. The first, shown above, credits the publisher in its inscription, but Piranesi was sufficiently well known by the second edition to give his own name.

The Round Tower is the first plate in the first edition, but in the second was preceded by an additional plate normally known as The Man on the Rack.

The Grand Piazza is next, and in the second edition was followed by an additional plate normally titled The Lion Bas-Reliefs.

Perspective of Arches, with a Smoking Fire follows.

The Drawbridge is next, and in both editions is followed by The Staircase with Trophies.

After that comes The Giant Wheel.

Prisoners on a Projecting Platform is next, after which both editions have two prints, The Arch with Shell Ornament, and The Well.

The Pier with a Gothic Arch follows.

The Pier with a Lamp is the penultimate.

The Pier with Chains is the final plate of both series.

Piranesi was one of the most important makers of prints, in terms of his influence on art as a whole. His Gothic inventions can be seen informing subsequent visual art over the next three centuries, which is perhaps a unique feat in European art.

Wikipedia, which has a good directory of other resources too.