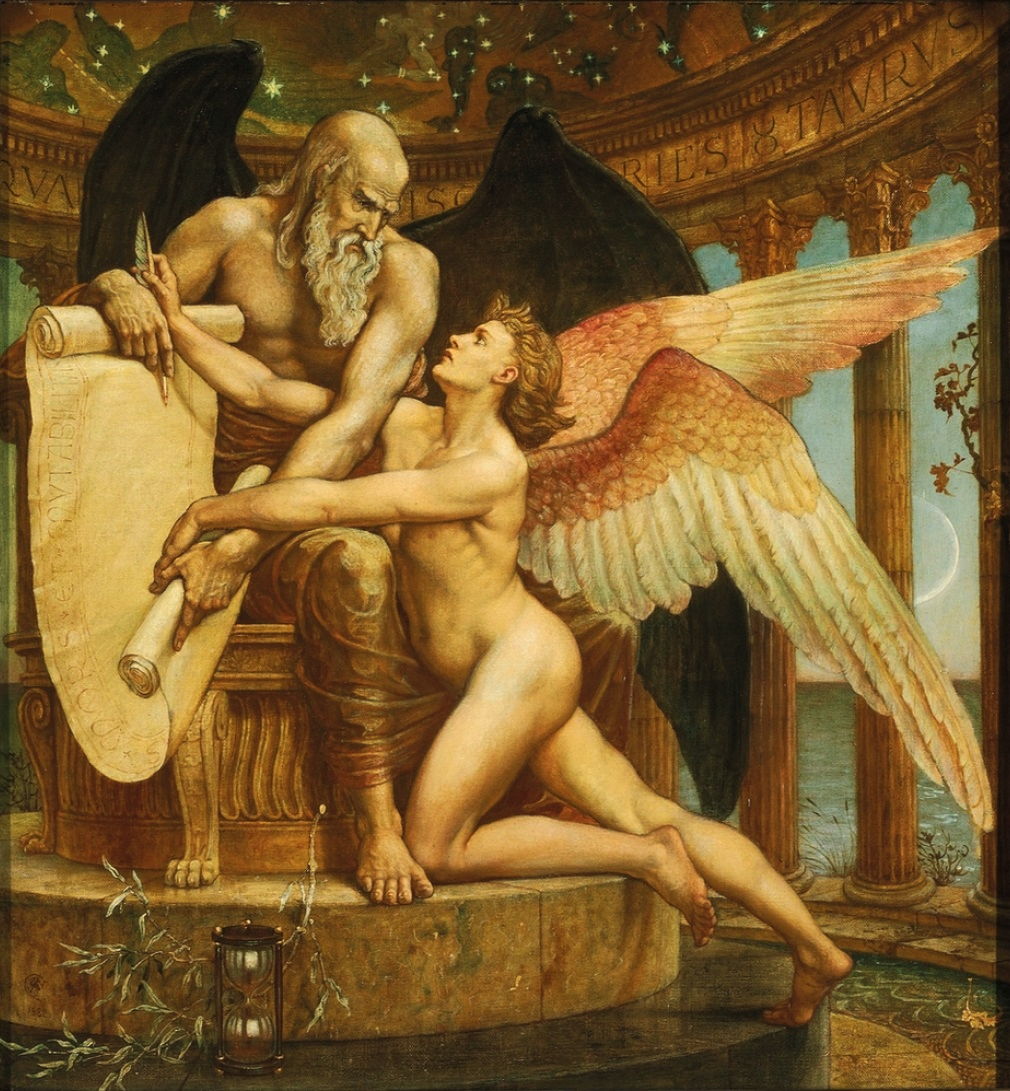 In yesterday’s article, I discussed some of the differences between paintings intended to stand alone and illustrations, with respect to telling stories. These arise from their contrasting narrative context, in that standalone images must tell their own story, whereas illustrations almost invariably appear next to a verbal version of the narrative.

Today I’ll show a selection of paintings and illustrations by two artists who proved highly talented at both forms: Gustave Doré (1832–1883) and Walter Crane (1845-1915).

Doré isn’t well known for his standalone paintings today, but at the time was well-received at the Salon, and one of the most successful illustrators of the century.

In about 1857, he created the drawing from which this engraving was made, to illustrate Canto 32 of Dante’s Inferno. This shows the ninth circle of Hell, with Virgil and Dante standing on the frozen surface of a lake within which are the spirits of those who committed sins of malice, such as treachery.

About four years later, he painted this version of a similar scene in oils. Rather than showing a specific moment in which Virgil and Dante tackle one of the sinners in torment, as he did in his illustration, Doré makes this more generic, which transforms it into a static tableau rather than narrative.

William Blake’s last and unfinished project was to illustrate an edition of Dante’s Inferno. Among his most famous watercolours for this is his brilliant depiction of Paolo and Francesca da Rimini, the adulterous lovers who were murdered by Francesca’s husband Giovanni Malatesta.

Alongside Dante’s description of this whirlwind of lovers, Blake’s image takes no effort to read. As a standalone painting, though, it falls short of Doré’s version of forty years later.

Doré shows the lovers, Francesca’s stab wound visible near the middle of her chest, Paolo’s still bleeding, as they are blown around and buffetted for their sins. At the lower right he shows Dante and Virgil looking on. This was first shown at the Salon in 1863, where it was praised by the critics.

Such direct comparisons aren’t possible with the images available to me of Walter Crane’s paintings and illustrations.

These two pages from the story of Bluebeard, in a children’s picture book, show how tightly bound are Crane’s illustrations to the text on those pages. In each case, he appears to have visualised each line of poetry. He has added some forward references, such as the key play in the first page, which links with the second. There are also some stranger cross-references, in the second page to the story of the Fall of Man.

Crane’s standalone account of the myth of the abduction of Persephone by Hades is quite conventional for a narrative painting of its time. He shows Persephone at the moment of her abduction, the peripeteia. She had been picking spring flowers in the meadow with the three other women shown at the left, and is seen still holding her posy, the link with the previous moments. Hades brought his chariot, complete with its pair of black horses symbolising the underworld, and is seen gripping Persephone’s right arm, ready to move her into the chariot and make off into the future, the dark cavern to the right, which will take the couple down to the underworld.

Crane’s paintings are as rich in their literary references as his illustrations. My final example from his work is drawn from Edward FitzGerald’s popular translation of the Rubaiyat of Omar Khayyam, and was originally exhibited with two verses quoted from that:

Would that some winged angel ere too late
Arrest the yet unfolded Roll of Fate,
And make the stern recorder otherwise
Enregister, or quite obliterate!

Ah love! could you and I with him conspire
To grasp this sorry scheme of things entire,
Would we not shatter it to bits – and then
Remould it nearer to the heart’s desire!

The Roll of Fate (1882) shows a male winged angel on bended knee before the figure of Time. The latter holds his scroll, on which the destiny of all mankind is recorded. The angel’s hands are intertwined with those of Time: each right hand grasps the quill which is used to record destiny, each left hand the other end of the scroll. The angel looks up, pleading, at Time, but Time looks down at him with a frowning scowl.

In front of the dais on which the angel kneels and Time sits is an hour glass. The whole is set inside a circular building which shows the stars through its roof, like a planetarium.

I hope these examples have given a clearer idea of the differences in approach used by such accomplished artists when tackling illustrations, compared with standalone narrative paintings. Simply being good at visual art isn’t sufficient to turn someone into a fluent narrative painter, nor to make them a good illustrator.