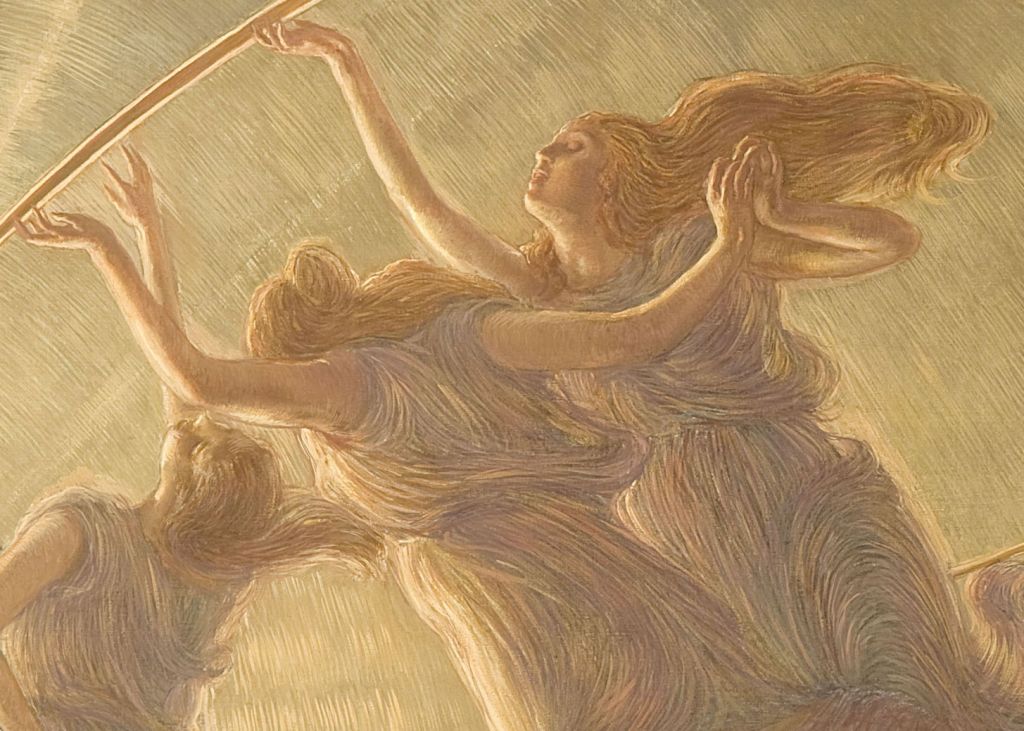 Ever on the hunt for more Symbolist artists, I found a trail which led me to the magnificent paintings of the Italian artist Gaetano Previati (1852–1920), the subject of this all too short article.

My trail started by chance with Federico Faruffini (1831-1869), a brilliant painter of histories until his suicide at the age of only 38. Too few of his paintings survive as usable images to write much more about him, except that his realist style became influenced by a group known as the Scapigliatura painters.

They were part of a wider artistic movement which developed in Milan, Italy, in the mid-nineteenth century; their name scapigliatura means bohemian or unkempt. As with so many of these movements, it was dominated by writers, but drew a few visual artists, among whom was the wonderfully-named Vittore Grubicy de Dragon (1851-1920), whose portrait was painted by the Divisionist and Symbolist artist Giovanni Segantini, who I have already featured.

Grubicy was a painter who had been influenced by Anton Mauve (1838-1888), whose cousin-in-law was Vincent van Gogh (1853-1890). Again, few of Grubicy’s paintings survive as usable images, but he was most significantly an art critic and gallery owner. In addition to exhibiting Segantini’s landscape paintings, in 1891 he organised a large show of Divisionist paintings, of which the most successful was Gaetano Previati’s Maternity, one of the first Italian paintings formally recognised as being Symbolist. And who was Previati’s most influential teacher? None other than Federico Faruffini, according to Wikipedia.

There’s one slight problem with this alluring linkage of artists: Faruffini died in 1869, seven years before Previati enrolled at the Brera Academy of Fine Arts. Then I looked at Previati’s paintings…

Even though Gaetano Previati may never have been taught by Faruffini, he was an exceptional artist, and I’m delighted to say that there are sufficient of his works available as usable images for us to enjoy today. He moved to Milan to study in 1876, where he won the Canonica Prize in 1879. During the 1880s he was successful with mainly figurative paintings, including several histories. He also adopted the Italian variety of Divisionist style during this period.

Among his early paintings using literary sources is Paolo and Francesca from about 1887, which refers to the adulterous lovers made famous in Dante’s Inferno, and painted repeatedly during the nineteenth century in particular. Unlike most other artists, Previati doesn’t show the couple being buffeted by the wind in Hell, but their deathly embrace impaled by a sword.

In about 1890, Previati painted this meticulously detailed account of The Kiss between Shakespeare’s tragic lovers Romeo and Juliet. His brushstrokes in the couple’s clothes are starting to organise more visibly, as he becomes Divisionist in style, thanks to Grubicy’s influence.

Previati’s Maternity from 1890-91 appears to have established his reputation, and is also one of his first full-bore Divisionist works. His fine brushstrokes cover almost the whole image, forming the upright stalks of flowers and blades of grass, and swirling through every garment. Behind the mother feeding her baby is a bright but suffuse light which lends a heavenly appearance to this tender celebration of motherhood.

His Divisionist style progressed to the dense patterns of fine brushstrokes of this Madonna of the Lilies from 1893-94. The infant Jesus is hard to discern, though, as a result of his restricted palette.

From 1895 onwards, Previati took part in the Venice Biennale, which held solo exhibitions of his work in 1901 and 1912.

My personal favourite among the few of Previati’s paintings I have been able to find is this Dance of the Hours from 1899. It’s a marvellous and innovative approach to a long-popular theme, developed for instance in Poussin’s Dance to the Music of Time (c 1634-36). Previati shows the Horae, the hours, dancing in the air around a golden ring, with the orbs of the moon in the foreground and the sun far beyond. Every fine brushstroke is rich in meaning: in the Horae they give the sensation of movement (detail below). Elsewhere they form the third dimension, or give texture to the ether. This painting also uses a restricted palette.

Previati’s Divisionist rendering of the Assumption of the Virgin Mary from about 1901-03 uses similar techniques very successfully, as a group of winged angels raises her body to Heaven.

Day awakens Night from about 1905 is another time-related theme which had become particularly popular during the late nineteenth century.

Previati captured a profound calm in his Nocturne (Silence) which he painted in 1908.

The following year, he revisited Dante’s story of Paolo and Francesca (1909), this time showing their souls being swept up in the stormy wind of Hell. He has also started to open up his palette.

The last dated painting I have by Previati is another religious work, taken from Christ’s Passion, of The Way to Calvary (1912). Its sombre clouds are dense almost to the point of appearing solid.

In 1911, Previati’s patron, friend and dealer Vittore Grubicy de Dragon formed a society to collect and appreciate Previati’s paintings, which brought them together in three solo exhibitions. Gaetano Previati died in 1920, and Grubicy followed him two months later.