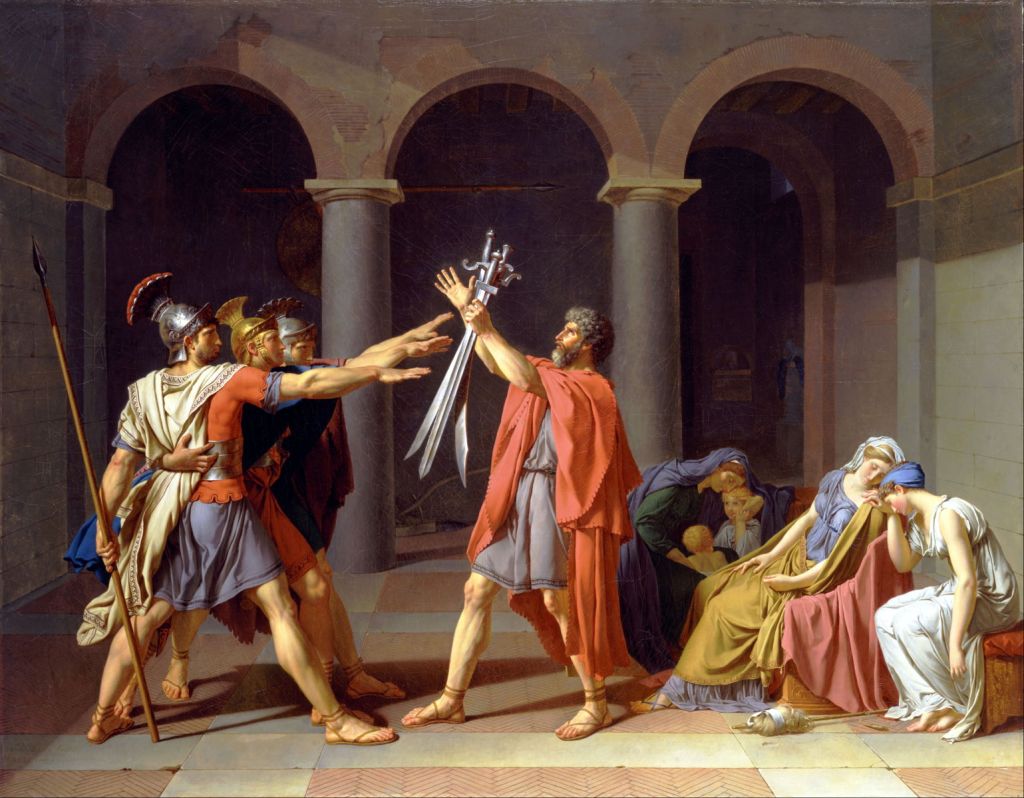 After the apotheosis of Romulus or whatever else accounted for his sudden disappearance, there was a brief interregnum during which Rome’s senators took it in turns to rule – for periods of just six hours at a time! Getting both the Roman and Sabine factions to agree on the successor to Romulus wasn’t easy, and the final agreement was for a Sabine king, Numa Pompilius.

At first, Numa declined the invitation to become King of Rome, but the people voted unanimously in his favour. Once in power, he set about changing the harsh and warlike nature of the city and its citizens by means of religious rites, forbidding the worship of graven images and banning animal sacrifice. Legend has it that Numa’s greatest achievement, though, was in handing down the city’s first set of codified laws, which are supposed to have been dictated to him by a nymph, Egeria, with whom the king fell in love – just the sort of story which makes for a good painting.

Nicolas Poussin’s Numa Pompilius and the Nymph Egeria from 1631-33 shows the meeting of King Numa, at the right, with Egeria, at the left, as she was being entertained by a young man with a lute, who may signify the Muses who apparently inspired Egeria to provide the laws of Rome. However, Numa hasn’t come equipped with any means of recording them, suggesting that this wasn’t the occasion on which Egeria dictated those laws.

Felice Giani’s much later painting of Numa Pompilius Receiving from the Nymph Egeria the Laws of Rome (1806) shows that process of dictation in full swing, with Numa working through scrolls, which are then transcribed onto the tablets of stone seen at the left. The nymph is the one sat on a throne, and is clearly in command, wagging her index finger at the King of Rome.

Numa established the order of high priests known as the Pontifices, and their chief, the Pontifex Maximus, terms which influenced the titles of the much later Christian church. Although Plutarch referred to the Vestal Virgins in his biography of Romulus, Numa is attributed the institution of the temple of Vesta, the duties of its priestesses, and the penalties for any breach.

His solution to the division of Rome into Sabine and Roman factions was to divide it further according to trades and arts, which he actively promoted. He also changed the calendar to keep it in better synchrony with the solar year, and re-ordered the months within it.

According to legendary dates, Romulus vanished in 716 BCE, and Numa ruled until his death in 673. He was succeeded by Tullus Hostilius, who fought a long war with Alba Longa, eventually resulting in the latter’s destruction. Within that legendary war is another legend which has been extensively painted: the battle of the Horatii.

Rather than set their armies against one another and lose many valuable citizens, Tullus and the king of Alba Longa made a gentlemen’s agreement to fight by proxy: each side would put up a set of triplets, who would then fight one another to the death. Whoever survived would secure victory for their side.

The Albans fielded their renowned warrior triplets from the Curiatius family, the Curiatii; the Romans their Horatii, ancestors of the famous Horatius Cocles who much later defended the bridge single-handed.

The two sides then massed on a battlefield about five miles out from Rome on the Appian Way, and the six men fought in front of them. Given the high stakes, their fighting was fierce, and the Curiatii were seriously wounded at the cost of the lives of two of the Horatii. The remaining Roman, Publius Horatius, realised that he was badly outnumbered, and sought to separate the three Curiatii to increase his chances: he ran across the battlefield until the Curiatii were well split up.

Fulchran-Jean Harriet’s Combat of the Horatii and the Curiatii was the winner of the prestigious Prix de Rome in 1798. It shows a late stage in the battle, as Publius Horatius is killing the Curiatii one by one, starting with the least-wounded of the three. One of his brothers doesn’t appear to be quite dead yet, either.

Giuseppe Cesari’s huge fresco Combat of the Horatii and the Curiatii (1612-13) shows the last Curiatius and Horatius (to the right) in the final phases of combat, as the Roman is about to deliver the coup de grace. Publius Horatius’ sister is shown at the left, by the bodies of the two dead Curiatii.

As was traditional, Publius Horatius then stripped the three corpses, and returned to Rome. He was greeted there by his sister Camilla, who had been engaged to one of the Curiatii, and immediately broke down and wept for the fate of her fiancé. Her surviving brother, declaring that no one should mourn the fallen enemies of Rome, killed her on the spot.

Louis-Jean-François Lagrenée’s Horatius Slays his Sister (1750-54) makes the brother appear thoroughly accusative, even though his sister is already dead. To the right of Horatius, the three bundles of clothes removed from the dead Curiatii are being paraded in public.

Francesco de Mura’s Horatius Slaying His Sister after the Defeat of the Curiatii (c 1760) shows the shock and fear generated by this murder, but omits the clothing which was said to have been the trigger for Camilla’s grief.

Victor Maximilien Potain’s Horatius Killing his Sister was the winner of the Prix de Rome in 1785. Publius Horatius is vociferously condemning his dead sister’s actions, and at the left is a display of the clothes he removed from the Curiatii, as victor.

Camilla’s murder was of course a crime, even in times of war, and Publius Horatius was condemned to die as a consequence. However, he appealed to a people’s assembly, which commuted his sentence. The family was required to atone for the crime by making sacrifice to the gods, which became a tradition.

By far the most famous, and most important, painting of the Horatii is bloodless, and shows a scene which doesn’t appear in verbal accounts: it is, of course, Jacques-Louis David’s The Oath of the Horatii.

David made his original and large painting, which is now in the Louvre, in 1784-85. Above is a superior image of the smaller copy made by the artist in 1786, now in Toledo, OH.

David chooses to show the three Horatii saluting their father, and taking their swords immediately before combat. Behind the father are three women, of whom the young woman at the far right is Camilla, sister to the Horatii and betrothed to one of the Curiatii, who thus knows that she will lose someone dear to her no matter what the outcome.

David chose a decisive and dramatic instant, which was enhanced and empowered by his brilliant composition and use of body language. This was commissioned for King Louis XVI, as an allegory about loyalty to the state and the monarch, which David interpreted as a message about the nobility of patriotic sacrifice. He cunningly left the viewer to decide where that loyal patriotism should be directed. Within five years, the French Revolution was at its height.

Tullus Hostilius was succeeded by Ancus Marcius in 642 BCE, and he by Tarquinius Priscus in 616, bringing the city under the monarchy of Servius Tullius in 578, the King of Rome thought to have been an Etruscan.

You may recall The Liberation of Caelius Vibenna, a wall painting in the François Tomb at Vulci from about 340 BCE, with its series of gruesome killings.

Reading from left to right are the figures of:

During the troubled years prior to Macstrna/Mastarna becoming King of Rome, some Etruscans allied themselves with Rome. The killings shown here were part of a surprise attack by loyal Etruscan warriors on those allies of Rome, which the heroes inevitably won. Servius’ time as King of Rome was far from peaceful, and ended in 535 BCE with his assassination.

The seventh and last King of Rome, Tarquinius Superbus, assumed the throne in 534 BCE, and my next article will tell the stories surrounding the end of this period in the history of Rome, in 510 BCE.