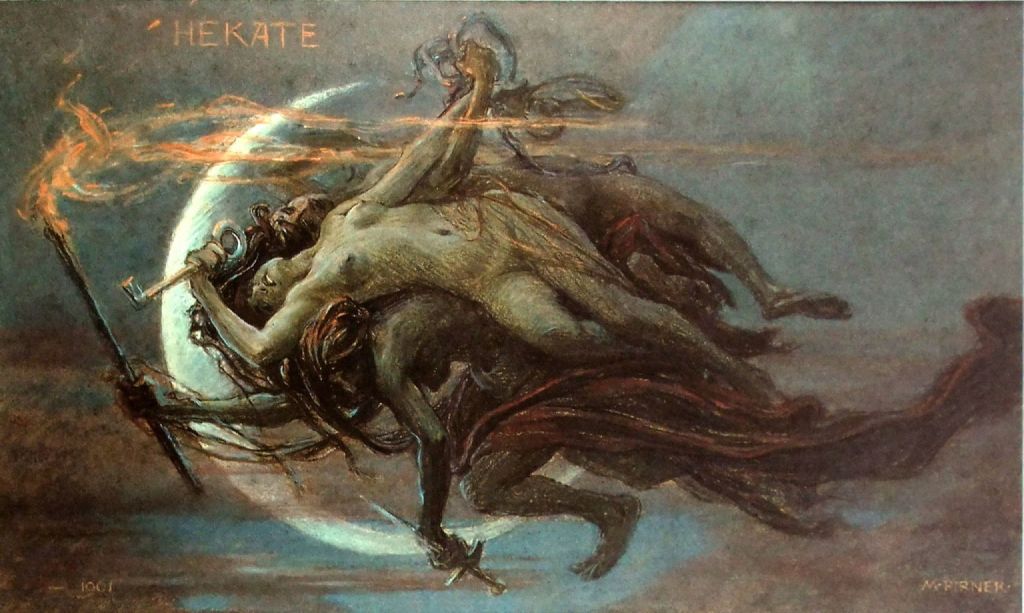 Hecate (Greek Ἑκάτη, Hekate, by which she was also known to the Romans) is another murky deity from the early days of the ancient Greek theogony. By Hesiod’s account she is the daughter of Perses and his cousin Asteria, whose grandmother was the primordial Gaia. In early accounts, her powers are quite general, enabling success and victory to those whom she favours. Later accounts associate her with Nyx, goddess of the night, Demeter and Persephone, with whom she is sent to the underworld.

Eventually, she has become associated with the moon, crossroads, doorways and other boundaries, sinister occurrences of the night including magic and witchcraft, and sorcery more generally. Her children are significant in themselves, including Scylla, Aeëtes, Circe and Pasiphaë. She is skilled in black arts, particularly working with herbal magic, and taught Medea to make her magic potions.

Her standard attributes include a pair of torches for lighting a doorway at night, dogs and serpents, a key to the door or gate, and her wheel, but by far her most distinctive feature in most of her visual representations is the fact that she is triple-bodied. Each of her three bodies is complete, and her three faces look outwards.

Francesco Primaticcio’s drawing of Diana and the Tripled-Faced Hecate with Pegasus from the sixteenth century is unconventional in showing her as three-headed, and with butterfly wings. She is kneeling at the head of the winged horse Pegasus, opposite the huntress Diana, with whom myths became confounded.

Stéphane Mallarmé’s drawing of a classical sculpture of Hecate, Greek Goddess of the Crossroads was engraved for his illustrated account of classical mythology published in 1880. This is her most conventional representation: fully triple-bodied, holding a key at the left, and torches to the left and right, with a symbol of the moon on her forehead.

Similar attributes can be seen in Maximilian Pirner’s more contemporary pastel of Hecate from 1901. Her three bodies have come apart a bit more as she flies in front of the moon, and two of her six hands are grasping snakes, and one a dagger.

You could be forgiven for thinking that Francesco de’ Rossi’s fresco from 1543-45 shows Eve with the serpent rather than Hecate. He hints at her triple body with the heads on which she is standing, and she wears a coronet of the moon.

Gustave Moreau also gives us few clues that Hecate is lurking at the foot of his late masterpiece Jupiter and Semele (1895). As shown in the detail below, the only clue is the crescent moon floating above her head.

Ironically, the most famous painting which is usually shown of Hecate almost certainly isn’t of her at all.

William Blake’s cryptic watercolour now known as The Night of Enitharmon’s Joy from 1795 was thought to show Hecate, largely on the basis of the three figures. If that were the case, it would be the only such representation in which two of the three figures faced inwards, which would contradict their symbolic form.

The next most likely candidate is that the woman seen at the front of the figures is from Blake’s own mythology, Enitharmon: partner, twin, and inspiration to Los (and mother of Orc). She symbolises spiritual beauty. In her ‘night of joy’, she establishes her Woman’s World, with a false religion of chastity and vengeance – which was Blake’s radical view of the 1800 year history of the ‘official’ Christian church.

She is accompanied by symbols of night, including the owl and bat. She also plays the role of Eve, which may explain the head of a snake peering out towards Enitharmon here, although this may be further confounding with Hecate. The donkey eating thistles symbolises Blake’s rejection of the ‘official’ church, and the two figures behind Enitharmon face in and bow their heads in guilt. The book on which Enitharmon’s left hand rests would then be Urizen’s ‘Book of Brass’, in which his repressive laws are laid down.

There are numerous paintings of witches and witchcraft which are claimed to include the figure of Hecate, but without any of her attributes. Given that they are so distinctive, it’s hard to accept that identification without evidence of the artist’s intent.