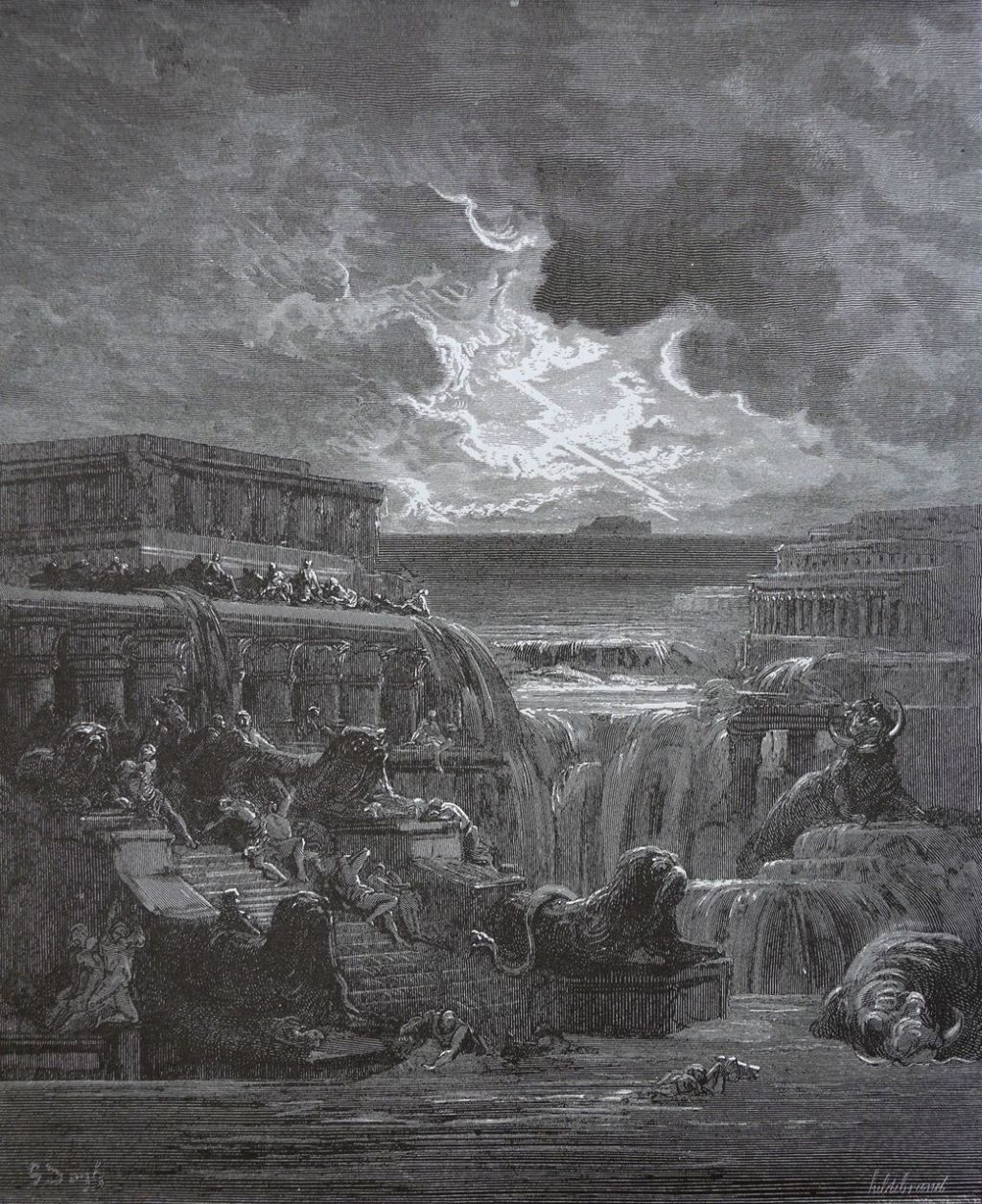 In the tenth book: God fortels the final victory of his Son over them, and the renewing of all things; but for the present commands his Angels to make several alterations in the heavens and elements. Adam more and more perceiving his fallen condition heavily bewails, rejects the condolement of Eve; she persists, and at length appeases him: then, to evade the curse likely to fall on their offspring, proposes to adopt violent ways, which he approves not; but conceiving better hope, puts her in mind of the late promise made them, that her seed should be revenged on the Serpent, and exhorts her with him to seek peace of the offended Deity, by repentance and supplication.

Thus they in lowliest plight repentant stood,
Praying; for from the mercy-seat above
Prevenient grace descending had removed
The stony from their hearts, and made new flesh
Regenerate grow instead, that sighs now breathed
Unutterable, which the Spirit of prayer
Inspired, and winged for Heaven with speedier flight
Than loudest oratory. Yet their port
Not or mean suitors, nor important less
Seemed their petition, than when the ancient pair,
In fables old, less ancient yet than these,
Deucalion and chaste Pyrrha, to restore
The race of mankind drowned, before the shrine
Of Themis stood devout.

The Son of God presents to his Father the prayers of our first parents now repenting, and intercedes for them. God accepts them, but declares that they must no longer abide in Paradise: sends Michael with a band of Cherubim to dispossess them; but first to reveal to Adam future things: Michael’s coming down.

[Adam] “Why in the east
Darkness ere day’s mid-course, and morning light
More orient in yon western cloud, that draws
O’er the blue firmament a radiant white,
And slow descends, with something heavenly fraught?”
He erred not; for by this the heavenly bands,
Down from a sky of jasper, lighted now
In Paradise, and on a hill made halt;
A glorious apparition, had not doubt
And carnal fear that day dimmed Adam’s eye.
Not that more glorious, when the Angels met
Jacob in Mahanaïm, where he saw
The field pavilioned with his guardians bright;
Nor that which on the flaming mount appeared,
In Dothan, covered with a camp of fire,
Against the Syrian king, who to surprise
One man, assassin-like, had levied war,
War unproclaimed. The princely Hierarch
In their bright stand there left his powers, to seize
Possession of the garden.

Adam shews to Eve certain ominous signs; he discerns Michael’s approach; goes out to meet him; the Angel denounces their departure.

[Michael] “Adam, Heaven’s high behest no preface needs.
Sufficient that thy prayers are heard, and Death,
Then due by sentence when thou didst transgress,
Defeated of his seizure, many days
Given thee of grace, wherein thou mayest repent,
And one bad act with many deeds well done
Mayst cover. Well may then thy Lord, appeased,
Redeem thee quite from Death’s rapacious claim;
But longer in this Paradise to dwell
Permits not: to remove thee I am come,
And send thee from the garden forth, to till
The ground whence thou wast taken, fitter soil.”

Eve’s lamentation. Adam pleads, but submits: The Angel leads him up to a high hill; sets before him in vision what shall happen till the Flood.

His [Adam’s] eyes he opened, and beheld a field,
Part arable and tilth, whereon were sheaves
New reaped, the other part sheep-walks and folds;
In the midst an altar as the landmark stood,
Rustic, of grassy sord. Thither anon
A sweaty reaper from his tillage brought
First-fruits, the green ear and the yellow sheaf,
Unculled, as came to hand; a shepherd next,
More meek, came with the firstlings of his flock,
Choicest and best; then sacrificing laid
The inwards and their fat, with incense strewed,
On the cleft wood, and all due rites performed.
His offering soon propitious fire from heaven
Consumed, with nimble glance and grateful steam;
The other’s not, for his was not sincere.
Whereat he inly raged, and, as they talked,
Smote him into the midriff with a stone
That beat out life; he fell, and deadly pale
Groaned out his soul, with gushing blood effused.

To whom thus Michaël:— “Death thou hast seen
In his first shape on Man; but many shapes
Of Death, and many are the ways that lead
To his grim cave all-dismal; yet to sense
More terrible at the entrance than within.
Some, as thou sawest, by violent stroke shall die,
By fire, flood, famine, by intemperance more
In meats and drink, which on the earth shall bring
Disease dire, of which a monstrous crew
Before thee shall appear; that thou mayst know
What misery the inabstinence of Eve
Shall bring on men.” — Immediately a place
Before his eyes appeared, sad, noisome, dark;
A lazar-house it seemed, wherein were laid
Numbers of all diseased, all maladies
Of ghastly spasm, or racking torture, qualms
Of heartsick agony, all feverous kinds,
Convulsions, epilepsies, fierce catarrhs,
Intestine stone and ulcer, colic pangs,
Demoniac phrenzy, moping melancholy,
And moonstruck madness, pining atrophy,
Marasmus, and wide-wasting pestilence,
Dropsies, and asthmas, and joint-racking rheums.
Dire was the tossing, deep the groans; Despair
Tended the sick, busiest from couch to couch;
And over them triumphant Death his dart
Shook, but delayed to strike, though oft invoked
With vows, as their chief good and final hope.
Sight so deform what heart of rock could long
Dry-eyed behold? Adam could not, but wept,
Though not of woman born: compassion quelled
His best of man, and gave him up to tears
A space, till firmer thoughts restrained excess;

He looked, and saw the face of things quite changed.
The brazen throat of war had ceased to roar;
All now was turned to jollity and game,
To luxury and riot, feast and dance,
Marrying or prostituting, as befell,
Rape or adultery, where passing fair
Allured them; thence from cups to civil brolls.
At length a reverend sire among them came
And of their doings great dislike declared,
And testified against their ways: he oft
Frequented their assemblies, whereso met,
Triumphs or festivals, and to them preached
Conversion and repentance, as to souls
In prison, under judgements imminent;
But all in vain. Which when he saw, he ceased
Contending, and removed his tents far off.
Then, from the mountain hewing timber tall,
Began to build a vessel of huge bulk,
Measured by cubic, length, and breadth, and highth,
Smeared round with pitch, and in the side a door
Contrived, and of provisions laid in large
For man and beast: when lo, a wonder strange!
Of every beast, and bird, and insect small
Came sevens and pairs, and entered in, as taught
Their order; last the sire, and his three sons,
With their four wives; and God made fast the door.
Meanwhile the south-wind arose, and, with black wings
Wide-hovering, all the clouds together drove
From under heaven; the hills, to their supply,
Vapor and exhalation, dusk and moist,
Bent up amain; and now the thickened sky
Like a dark ceiling stood: down rushed the rain
Impetuous, and continued till the earth
No more was seen.

The floating vessel swum
Uplifted, and secure, with beaked prow,
Rode tilting o’er the waves; all dwellings else
Flood overwhelmed, and them, with all their pomp,
Deep underwater rolled; sea covered sea,
Sea without shore; and in their palaces,
Where luxury late reigned, sea-monsters whelped
And stabled: of mankind, so numerous late,
All left in one small bottom swum embarked.
How didst thou grieve then, Adam, to behold
The end of all thy offspring, end so sad,
Depopulation!

To whom the Archangel:— “Dexterously thou aimest.
So willingly doth God remit his ire,
Though late repenting him of Man depraved;
Grieved at his heart, when looking down he saw
The whole earth filled with violence, and all flesh
Corrupting each their way; yet, those removed,
Such grace shall one just man find in his sight,
That he relents not to blot out mankind,
And makes a covenant never to destroy
The earth again by flood, nor let the sea
Surpass his bounds, nor rain to drown the world,
With man therein or beast; but, when he brings
Over the earth a cloud, will therein set
His triple-colored bow, whereon to look,
And call to mind his covenant. Day and night,
Seed-time and harvest, heat and hoary frost
Shall hold their course, till fire purge all things new,
Both heaven and earth, wherein the just shall dwell.”