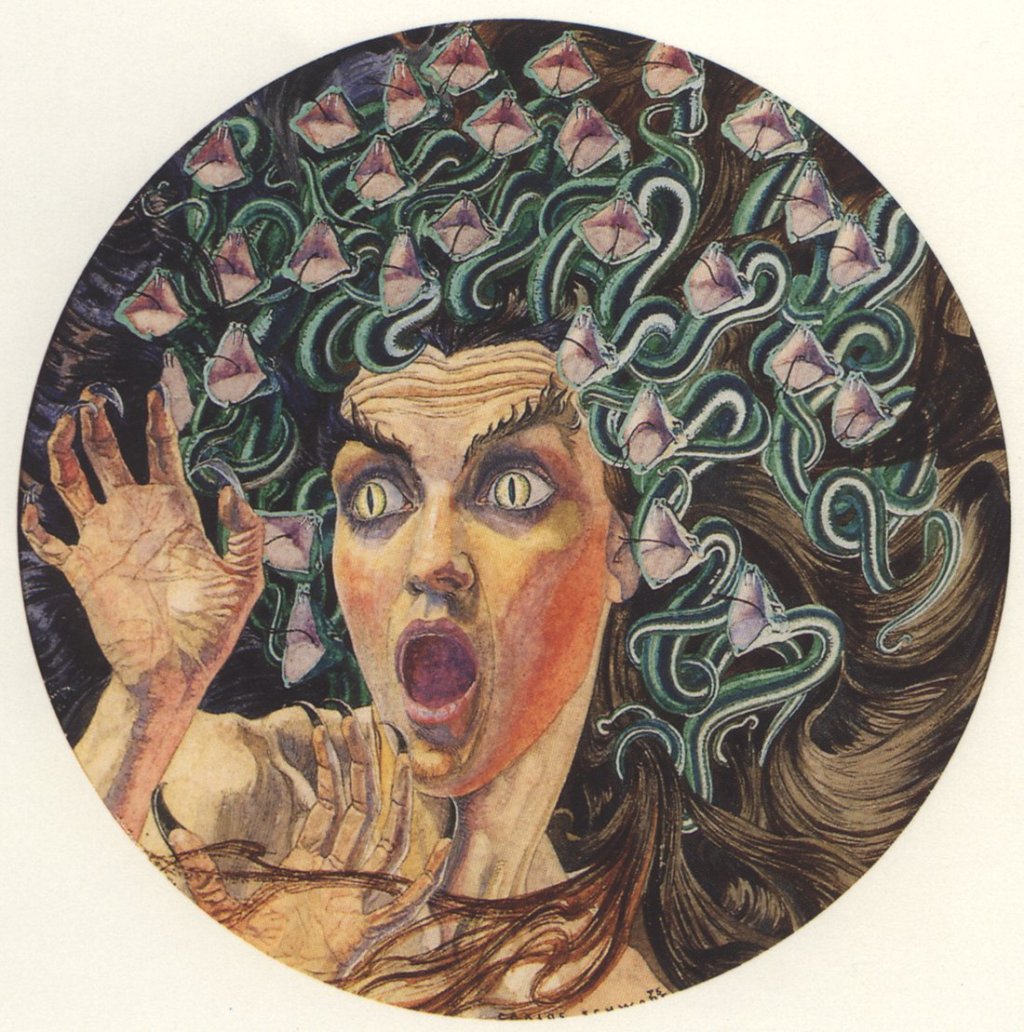 Among many other murky and rarely painted descendants of primordial deities are two groups of three sisters: the Graiai (Greek Γραῖαι) or Graeae (Latin), and the Gorgons. They both appear in the myth of Perseus and Andromeda, and Medusa, the best-known of the Gorgons, is frequently referred to with the image of her head being incorporated into the shield of the major goddess Athena (Roman Minerva), making it the Aegis.

Perseus’ quest is initiated by his need to bring a gift to a grand banquet held by his mother Danaë’s suitor Polydectes. Guests are required to bring gifts of horses, but Perseus has none to bring; Polydectes names the alternative of the head of Medusa the Gorgon. To prepare for that challenge, Perseus must acquire the equipment he needs to behead Medusa without himself being turned to stone. With the guidance of Athena, he first seeks out the Graiai, who can point him in the direction of the Hesperides.

The Graiai, also known as the Grey Ones or the Old Women, are grandchildren of the primordial deity Gaia by Pontos, via Phorkys and Keto, and sisters of the Gorgons, whom they guard. The most memorable detail of the Graiai is that between the three of them they share one eye and one tooth. Their only significant appearance is in the myth of Perseus, and they are depicted in few works of art. By far the most important of these is Edward Burne-Jones’ Perseus Series.

The second painting of the Perseus Series was intended to contain a text summary of the whole story, drawn from the Latin of Sir Richard Claverhouse Jebb (1841-1905), a contemporary classical scholar and promoter.

Above is the final gouache study made by Burne-Jones in 1877-80, from which he painted a finished low-relief panel, below.

These words translate as:
Pallas Athena spurred Perseus to action with her urging, and equipped him with arms. The Graiae revealed to him the remote home of the nymphs. From here he went with wings on his feet and with his head shrouded in darkness, and with his sword he struck the one mortal Gorgon, the others being immortal. Her two sisters arose and pursued him. Next he turned Atlas to stone. The sea serpent was slain and Andromeda rescued, and the comrades of Phineas became lumps of rock. Then Andromeda looked in a mirror with wonder at the dreadful Medusa.
(Modified from Anderson & Cassin.)

Below that inscription, Burne-Jones shows Perseus with the three Graiai. He has just intercepted and seized their single, shared eye, which he holds in his right hand, in order to force them to take him to the Hesperides, to obtain the kibisis in which to store Medusa’s head in safety.

Burne-Jones then changed plan, and for his final version, now in Stuttgart, dispensed with the inscription.

Perseus later proceeds on his mission to the Gorgons (Greek singular Γοργώ, plural Γοργών), three sisters from the same parents, Phorkys and Ceto. Two of them, Stheno ‘the mighty’ and Euryale ‘wide sea’, are deities but the third, Medusa ‘the queen’, is mortal. Ovid’s Metamorphoses gives an account of the origin of Medusa’s fearful appearance, in her rape by Poseidon following which Athena cursed her to have snakes in place of her golden hair. The looks of all three sisters are claimed to turn the viewer into stone, posing the problem central to Perseus’ mission.

The fourth painting in Burne-Jones’ Perseus Series, The Finding of Medusa (1882), was left unfinished even in its bodycolour study. It shows Perseus, wearing the helmet of Hades for invisibility, brandishing his adamantine sword, and viewing the scene in his mirror, in the Gorgons’ cave. Medusa, her hair yet to be detailed into snakes, is stood with a fearsome expression, while her two immortal sisters are scrunched together under their wings.

Of the three Gorgons, only Medusa has become a popular theme in paintings.

The most enduring image is probably Caravaggio’s Medusa from about 1597, which was actually his second version, now in the Uffizi in Florence; the first is slightly smaller and in a private collection. Unusually for Caravaggio, this was painted on a tondo. He follows traditional lines, with ample blood and abundant snakes, and captures the open-mouthed horror in her face.

In using a tondo like this, Caravaggio refers also to the image of the head of Medusa which appears on Minerva’s Aegis, the round shield which is one of her attributes. The artist’s vivid realism gives depth, making this appear to be a painted relief not a flat canvas.

Also noteworthy is Carlos Schwabe’s watercolour Medusa from 1895, with its feline eyes and that characteristic wide-mouthed look of utter horror. This is one of the first close portraits in which she is very much still alive, too.

Fernand Khnopff appears to have read more widely and was faithful to other sources of classical myth, in his wonderful pastel painting of Sleeping Medusa from 1896. Described as winged, the artist shows Medusa as a huge aquiline creature with a human head.

The great Polish artist Jacek Malczewski made Medusa a recurrent theme in his work. Above is his Medusa from 1900, in which the snakes adorning her hair curl and sweep in symmetry, amid more natural locks.

Perseus’ mission is to kill Medusa by decapitating her, then – still without looking directly at her face – place her head in his kibisis, for return to Polydectes.

In the fifth painting in Burne-Jones’ series, The Death of Medusa I (1882), Perseus has just cut Medusa’s head off, and holds it aloft with his left hand, at the far right edge of the painting. The adamantine sword is still in his right hand, and the kibisis is slung around his neck. Emerging from the severed neck, as if in collage, are Pegasus and Chrysaor, the latter shown as the associated person and without his characteristic curved golden sword. Three of the serpents from Medusa’s head have detached and fallen to the ground.

Burne-Jones’ sixth painting, The Death of Medusa II (1881-2), completes the story of Medusa, as Perseus flees from the remaining two Gorgons. The headless body of Medusa is left on the ground, and her sisters fly around searching for her assailant. Perseus wears the helmet of Hades to maintain his invisibility, and is flying away with his winged sandals, while inserting Medusa’s head in the kibisis.

Medusa’s fearful head lives on, though, in Athena’s Aegis, which is perhaps her most distinctive attribute, and shown in my final painting, Gustav Klimt’s early masterpiece of Pallas Athena from 1898.

The moral, should you want one, is that no one should ever go far from a mirror, just in case someone should brandish the head of Medusa at you.