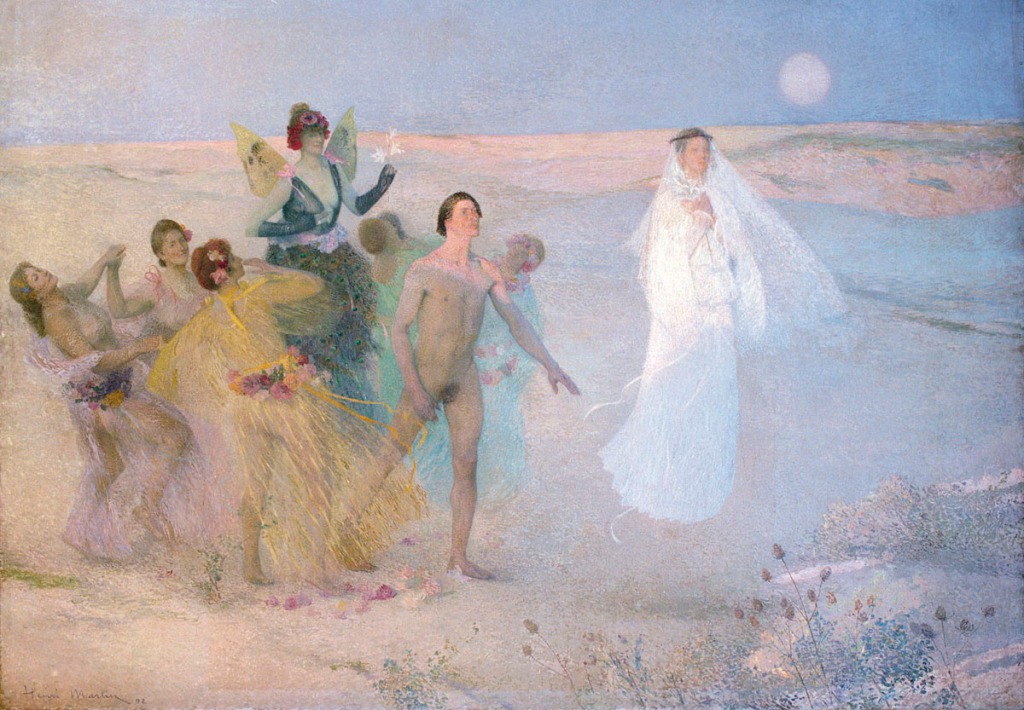 Looking through old records of successful painters around the turn of the nineteenth to twentieth centuries, one name crops up in many places. A repeated gold medallist, participant in the Salon, Joséphin Péladan’s Salon de la Rose + Croix, and the Exposition Universelle in 1900, Henri Martin (1860–1943) has now all but vanished. That is, until you visit public buildings in Paris, and several provincial art galleries around France.

Martin is particularly interesting because he flourished as a Divisionist, but is never ranked alongside the better-known Neo-Impressionists. He was also a prolific painter of Symbolist works, but seems to have escaped most recent surveys of that movement. In this and two subsequent articles, I look at some of his more significant works, and hopefully some of them may take your breath away.

Henri-Jean Guillaume Martin was born in Toulouse, France, just before the dawn of Impressionism, and in 1877 started his training at the École des Beaux-Arts in that city. When he won first prize at the end of his course, he was awarded a bursary to support him in Paris from 1879, working in the studio of one of the last great history painters, Jean-Paul Laurens. From 1881, he painted mainly history paintings of classical subjects, and was most influenced by poetic themes, including Dante’s Divine Comedy. The first painting of his to be exhibited in the Salon was accepted in 1883.

Martin’s Self-Portrait as John the Baptist from 1883 is wonderfully loose in its brushwork, and a powerful study.

To complete his apprenticeship, in 1885 he travelled to Italy, where he was most influenced by Giotto and Masaccio. On his return to Paris, he experimented with Divisionist (‘pointillist’) technique, and in 1889 was awarded his first gold medal in the Salon. The successful painting used Divisionist methods, and appears to have been the first such painting to achieve recognition in the Salon, although as might be expected its reception was mixed.

Martin’s version of Divisionism was different from Seurat’s, in that he painted less mechanically, using more spontaneous short marks of the brush to construct form from separated parallel strokes. Because of this, Martin is usually omitted from lists of Neo-Impressionists and Post-Impressionists.

Martin’s wife modelled for his portrait of The Poet Clémence Isaure (c 1890). Not well known beyond Toulouse, Isaure is a semi-legendary character claimed to have lived during the latter half of the 1400s. She is attributed with founding or restoring the local Academy of the Floral Games, which are thought to be the most ancient literary institution in the west. However those games claim to have been founded in 1323, more than a century earlier than her purported life.

His style here is changing from his early realism to his mature Divisionism.

Lauragais Landscape (1891) is a view of the rural landscape to the south-east of Martin’s home city of Toulouse. This appears to have been an experiment in facture, in which he has applied strokes of paint which are a transition towards Divisionism.

He became more overtly Symbolist at that time, too, and in 1892 exhibited with the Salon de la Rose + Croix, led by “Sâr” Joséphin Péladan (1859-1918). His Man Between Vice and Virtue (1892) expresses his Symbolism in distinctly Post-Impressionist style, with his own version of Divisionism. It’s also unusual for its non-classical depiction of the man’s body.

The Poets of Gay Knowledge followed in 1893, the word gay here in its older sense of being full of joy. Set in a barren wood at night, three classical muses float without wings, two of them playing lyres. Below are two figures who appear to refer to Dante (centre) and Virgil (right) from Dante’s Divine Comedy.

More typical of his painting style at this time, Christ and the Samaritan Woman (1894) uses fine brushstrokes rather than the dots of ‘pointillisme’ to build colour and form, and in places those strokes have become organised in the way that Vincent van Gogh’s rather coarser strokes did. Martin continued to paint religious and other narrative works well into the twentieth century – another distinction from the mainstream Neo- and Post-Impressionists, and closer to Symbolism.

With shorter brushstrokes and more rustic subjects, such as his Shepherd Returning His Sheep (1894), his paintings could be mistaken for Pissarro’s more Divisionist works from the same period, but here Martin also uses longer strokes to form the texture of the wooden pillars.

He also continued to explore overt Symbolist themes, as with the visionary angel in his Charity (1895).

His bold use of colour paralleled the paintings of Théo van Rysselberghe, as in Martin’s Orpheus in a Wood (1895). However, Martin did not base himself in Provence, but further to the north and west.