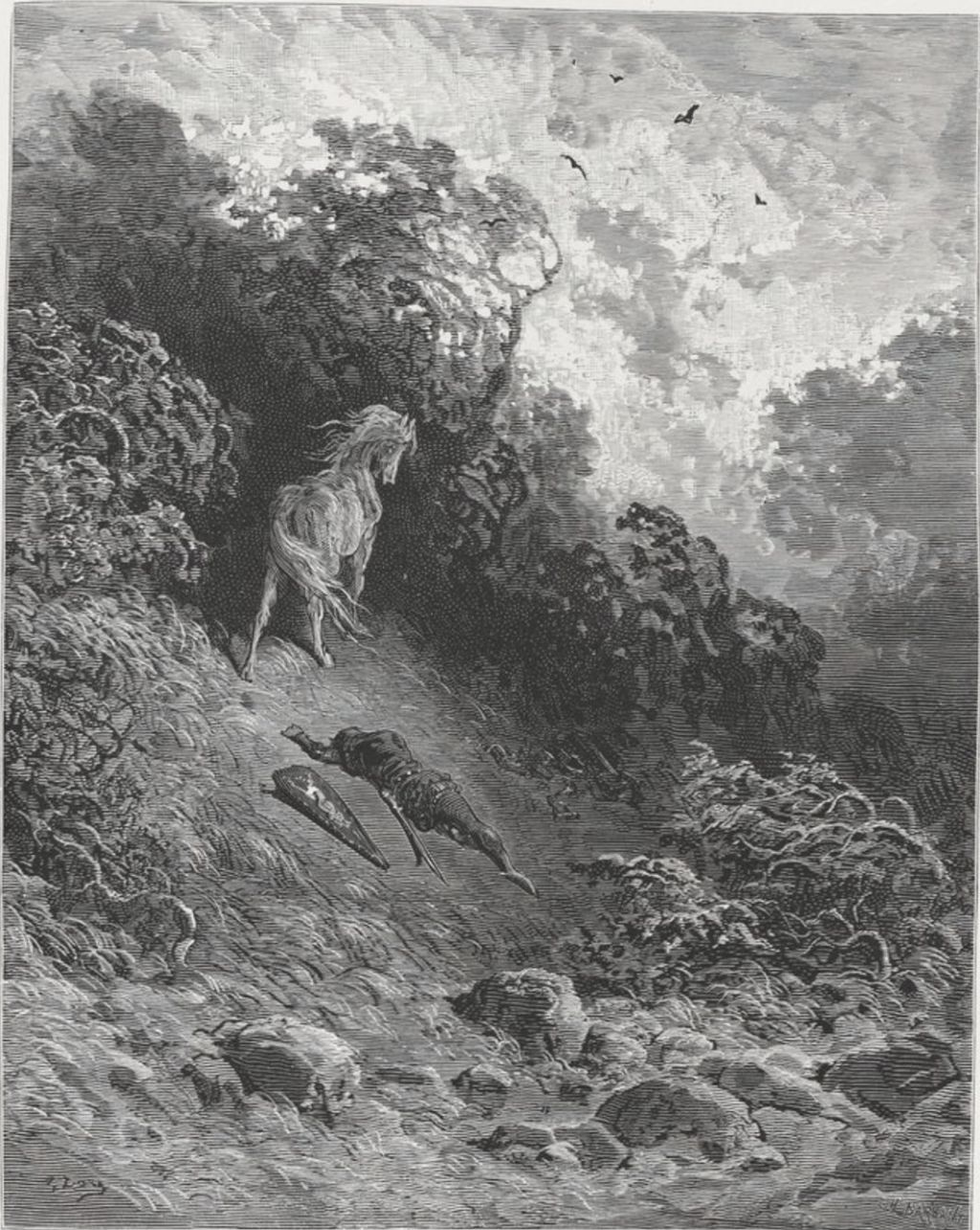 Ruggiero’s fiancée Bradamante has been promised by her parents to Prince Leon of Greece. In a bid to prevent her from marrying anyone else, Ruggiero has travelled to Belgrade, where he leads Bulgar rebels to trounce the Greek army, led by Emperor Constantine and his son Leon. Ruggiero pursues Leon and the retreating Greeks, entering lodgings in a city ruled by Ungiardo, a loyal servant of Constantine. A Greek staying in the same lodgings recognises Ruggiero, and quietly tips off Ungiardo of Ruggiero’s presence.

At the opening of Canto forty-five, Ariosto warns the reader that Ruggiero’s growing boldness is about to be dashed.

So it is. When Ruggiero is fast asleep that night, Ungiardo’s men seize him and throw him into prison. The ruler sends a messenger to tell his emperor who he’s just captured. Constantine is delighted, and thinks this opens up another opportunity to defeat the Bulgars and take Belgrade. His sister Theodora, whose son Ruggiero had killed in battle, begs her brother to take vengeance on the knight.

Ruggiero is taken from Ungiardo’s jail to face the wrath of Theodora, who wants him put to death in the cruellest possible way.

Completely unware of what has happened to her lover, Bradamante is now preparing herself to face suitors, who according to Charlemagne’s promise to her must defeat her in combat. But where has Ruggiero gone, she wonders? Why isn’t he among those ready to accept her challenge? In his absence, Bradamante starts to despair that she will remain unmarried after all. She questions whether it is she who is at fault, and longs for his return.

Constantine’s son Leon, though, is renowned for his chivalry, and has deep respect for Ruggiero and his valour on the battlefield. He isn’t prepared to see the knight die as Theodora wishes, so devises a way to rescue him. Leon persuades the guard to allow him in to speak to the prisoner. Once in the dungeon, a henchman strangles the guard, and Leon releases Ruggiero to stay with him for a few days to recuperate. During that time, Leon sends a page to recover the knight’s armour and weapons from Ungiardo.

Ruggiero is confused by Leon’s kindness, and recognises his great debt to the prince. By then, news has reached them of Bradamante’s challenge to suitors. Leon is upset by this, as he recognises that he is unable to defeat her in combat, but comes up with the idea of sending Ruggiero in his place, dressed in his colours. Ruggiero agrees to this, and offers to serve Leon however he wishes. On reflection, though, Ruggiero recognises that he can’t win in any event.

Leon and Ruggiero travel together to Paris to accept Bradamante’s challenge. Ruggiero now has his own armour, weapons, and his mount Frontino. Once they arrive and set up their tents outside the city walls, Leon sends word to Charlemagne’s court of his presence, and is granted an audience at which he explains his purpose. Bradamante is informed, and her duel is prepared for the following morning.

Ruggiero feels like a condemned man, knowing that morning will be his last. He decides to fight Bradamante on foot, armed only with a sword, and that won’t be his either for fear of wounding his opponent. He can’t be mounted on his horse Frontino, as that would reveal his true identity. He spends the time before dawn blunting the edge of his sword, then as the sun starts to rise he dresses in Leon’s surcoat.

Bradamante’s preparations are quite the opposite, as she thinks this is her chance to kill the prince that her parents want her to marry instead of Ruggiero. Far from blunting her sword, she spends the night sharpening it ready to penetrate his chest in the morning.

As soon as the signal to start begins, Bradamante savagely attacks her opponent, but can’t pierce his armour. Ruggiero deftly dodges as much as he can without retaliating in kind. As the sun slowly sets, she redoubles her efforts, but still makes no headway against him, and is quickly becoming exhausted.

When night falls, Charlemagne and his court judge them well matched, and the King tells Bradamante that she will marry her opponent, thinking him to be Leon. At that, Ruggiero hurries off to the prince’s tent. Now it is Leon who expresses his debt to Ruggiero. The knight leaves Leon and goes despondently to his own tent, where he arms himself afresh and gallops off into the night on Frontino. As he rides away, he laments that he didn’t die in the clutches of the vengeful Theodora.

At dawn, Ruggiero enters a dark forest, where he contemplates taking his own life. He first frees his horse, and thanks him for his long and devoted service. His lament then brings sorrow to the birds and other creatures around him.

Bradamante has also decided to take her own life rather than go back on her word. She makes her own lament, that she has been won by someone who hasn’t performed any courageous deeds, but that she simply couldn’t kill her opponent.

The following morning, Marfisa presents herself to Charlemagne and protests that Bradamante had not just been betrothed to Ruggiero, but that they had undergone the ceremony of marriage, therefore she cannot wed any other partner. With no other option, Bradamante agrees with her, which disturbs the King. He summons Bradamante and her father, and Marfisa repeats her claim in front of them all. Bradamante remains silent, but makes it clear that Marfisa’s claim may well be true.

Rinaldo and Orlando are delighted at this, at it invalidates any pact with Prince Leon. Duke Aymon refuses to be defeated, though, and accuses Marfisa of making the marriage up. He points out that any such event must have taken place before Ruggiero was baptised, in which case, as he was still an infidel, it would be an invalid union.

Charlemagne listens in silence. Debate spreads through the country, until Marfisa proposes that Leon should fight Ruggiero to settle the matter. As no other man can marry Bradamante while Ruggiero lives, the survivor of that duel can legitimately be Bradamante’s husband. The King informs Leon of this proposal, to which he agrees, confident that he can again rely on his substitute (not knowing him to be Ruggiero).

Leon starts to regret his initial confidence when he discovers that the knight who fought so well in his place has gone missing. He sends his men out to search for Ruggiero, but they cannot find any trace. Only the sorceress Melissa can help now.

Leon, Prince of Greece, the son of Emperor Constantine, with whom Bradamante’s marriage is arranged.

Marfisa, Ruggiero’s sister, a valiant and fearsome ‘pagan’ warrior who has converted to Christianity.

Orlando, the hero, Charlemagne’s nephew, a Count, and his most outstanding paladin.