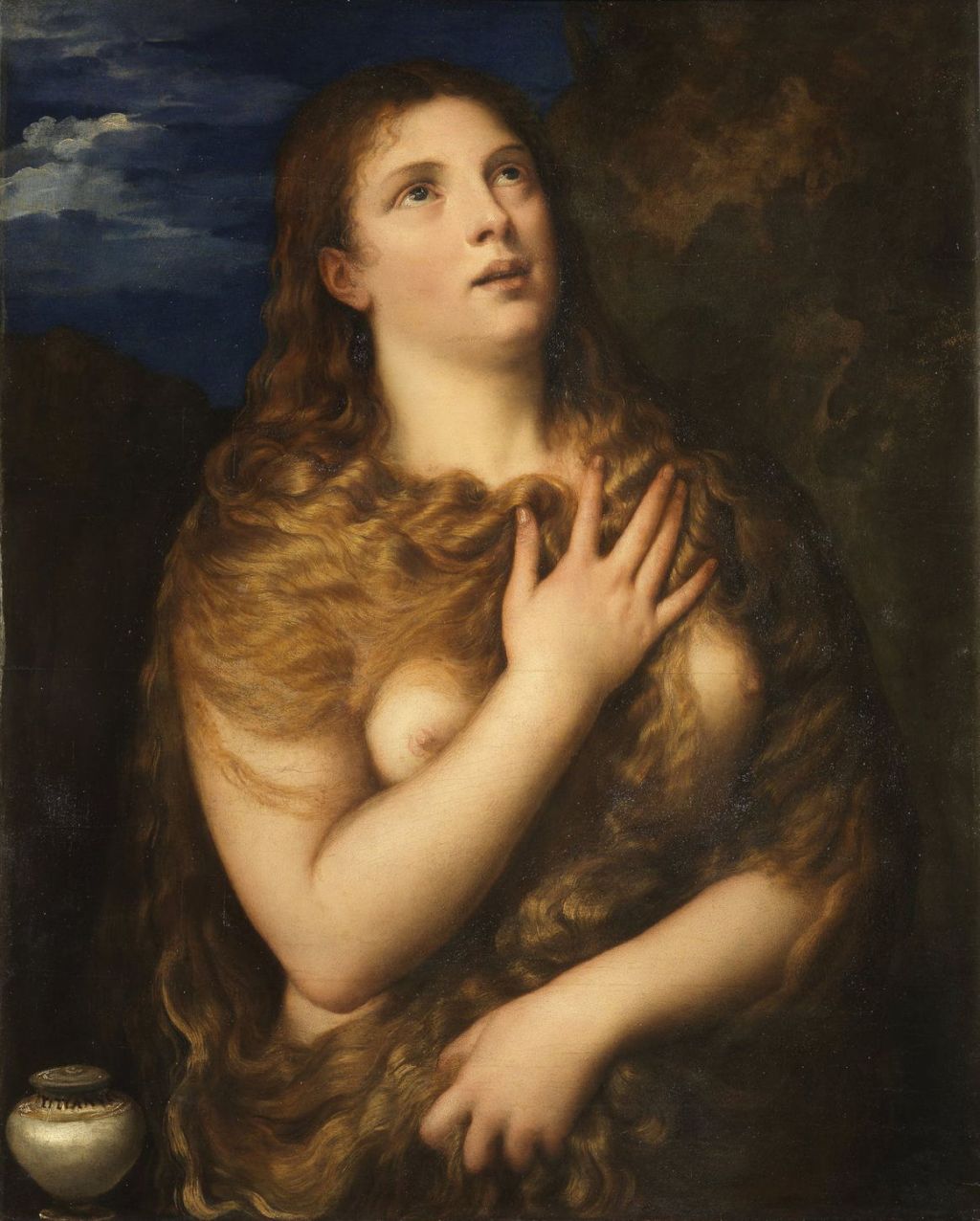 In 1531, Titian had already established himself among the ranks of the great masters like Raphael and Michelangelo. In March of that year, he received a commission to paint what became one of his most celebrated motifs, Mary Magdalene. His painting, completed in a month, is remarkable and became what was probably the first in a series of about forty which he painted between then and the year before his death in 1576. Previous paintings of Mary had been much more prim and proper; Titian shows her naked body swathed in part by her long tresses. Not only that, but this painting was commissioned for an Italian noblewoman, a widow, the Marchioness of Pescara, better known now as Vittoria Colonna (1492-1547).

We assume that life for the nobility during the Renaissance was all wine and roses, but it certainly wasn’t for Vittoria Colonna. The King of Naples insisted that she was engaged at the age of three to the son of the Marquis of Pescara. When she was nine, Pope Alexander VI confiscated all her family’s possessions and land where they lived in the Alban Hills, near Rome. They fled to the island of Ischia, near Naples, where her fiancé’s family gave them shelter. She was educated there by her fiancé’s aunt, in literature and the arts, and at the age of seventeen married as was required of her.

Within two years, her husband joined the League against the French, and while fighting at the Battle of Ravenna in 1512 he was captured and imprisoned in France. When he finally returned to her, she still saw little of him, and in 1525 he was wounded badly at the Battle of Pavia. She became a widow shortly before Christmas of that year, at the age of 33.

Even then she could only do what others allowed. When her husband died, she had been on her way to Milan to tend him. She returned to Rome, where she requested to take her vows and enter a convent, but her brother and Pope Clement VII refused permission, probably in the hope that she would enter into a politically advantageous marriage.

Instead of conforming to their expectations, she dedicated her life to writing poetry, her friendships with artists and literary figures, and religious devotion, although she remained a lay person until her death in 1547. Among her literary friends were Pietro Bembo and Baldessare Castiglione, and in 1536 she became involved in a passionate friendship with the ageing Michelangelo, who made drawings of her and dedicated some of his sonnets to her.

Titian’s painting of the Penitent Magdalene which he painted in 1531 was almost certainly not just intended for Vittoria Colonna, but was commissioned by her through Federico II Gonzaga, the Duke of Mantua and son of Isabella d’Este, and his agent in Venice. Marjorie Och has examined the letters which were exchanged between the parties, and the evidence is compelling.

This may appear a circuitous form of patronage: a widow making arrangements indirectly through an influential relative, but it was common practice at the time. Federico Gonzaga was already one of Titian’s major patrons and had given the artist considerable help in meeting Charles V and securing his imperial patronage. Networking and favours were central to getting things done in the Italian Renaissance.

The composite Mary was a beautiful but sinful young woman who revelled in sexual pleasure. She became a follower of Christ on her repentance, and after his crucifixion became a penitent widow. Even more unbelievable extensions to her story take her to Provence, in the south of France, where she baptised pagans in Marseilles and spent thirty years as a hermit in a cave near Sainte-Baume.

She was thus the model of a sinful woman who was redeemed through faith in Christ. Her sin was common to all women, that of weakness of the flesh, and she became a powerful figure in the minds of many women in the Renaissance and later, including Vittoria Colonna. There’s no evidence that Titian’s patron influenced his work, although Colonna seems to have been happy with his innovative treatment – it was, perhaps, just what she was thinking of.

Although adopting a similar pose, this version from about 1552, now in Naples, is more fully clad. The pot of myrrh next to her has been joined by an open Bible resting on a human skull.

By about 1560, her décolletage has dropped a bit and she has become more fleshly again. This version is now in the Getty.

This version in the Hermitage from about 1565 follows similar lines.

Just the year before his death, the sky behind has become more Romantic, but the figure remains much the same.

Paintings of the Penitent Magdalene had changed irrevocably, thanks to Vittoria Colonna’s commission and Titian’s radical treatment. This is one of several versions painted by that great exponent of chiaroscuro, Georges de La Tour, which probably dates from around 1630, a century later.

By the nineteenth century, artists including Jules LeFebvre pushed further into The Golden Legend and introduce the female nude into what was ostensibly a religious painting. This is supposed to show Mary Magdalene during her life as a hermit in a cave not far from Marseilles. I suspect that Vittoria Colonna would have rejected it.

Titian seems to have understood exactly what Vittoria Colonna wanted, and in doing so changed art.

Marjorie Och (2001), Vittoria Colonna and the Commission for a Mary Magdalen by Titian, in Beyond Isabella, Secular Women Patrons of Art in Renaissance Italy, eds. Reiss & Wilkins, Truman State UP. ISBN 978 0 943 54988 0.