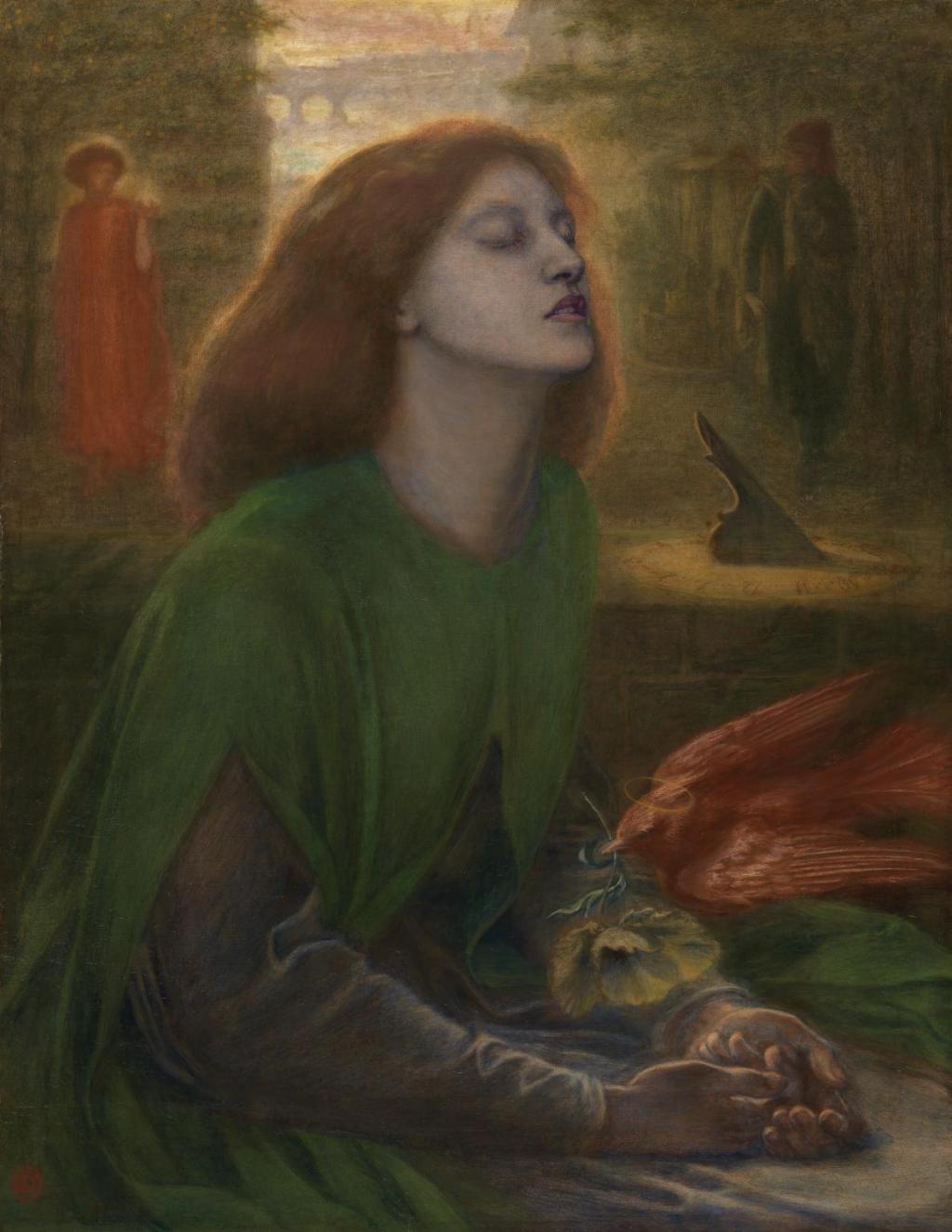 Dante Gabriel Rossetti had started to become obsessed with his name-sake and Beatrice soon after his early successes as a Pre-Raphaelite painter. In December 1849, he wrote a short story titled Hand and Soul which was published the following month in the first issue of the Germ, the movement’s magazine, which Rossetti’s brother William Michael edited.

The story tells of courtly love, artistic and religious fervour of an imaginary mediaeval painter in the Italian city of Arezzo, who is in a strictly Platonic relationship with “his mystical lady, now hardly in her ninth year”, the same age as Beatrice was when Dante claimed to have met her.

Shortly afterwards, Rossetti started to sketch for a painting of their meeting in Purgatory.

In this figure sketch for The Meeting of Dante and Beatrice in Purgatory, made in 1852, Dante is on his knees as his beloved Beatrice admonishes him for straying from the path of righteousness.

Rossetti had second thoughts, and in 1853-54 painted this more conventional composition, showing Dante is full spate, and Beatrice flanked by angels carrying golden crosses. His details are at odds with Dante’s account, though.

At about the same time, Rossetti was working on a more narrative watercolour of another meeting between the two, this time based on the Vita Nuova, Beatrice Meeting Dante at a Marriage Feast, Denies Him Her Salutation (1852). Dante, dressed in his traditional red, is here being ignored by his beloved, after they bumped into one another at a wedding. This is thought to be Rossetti’s first painting in which Elizabeth ‘Lizzie’ Siddall is the model for Beatrice.

At this time, Lizzie was about 22. A working class woman, who initially worked at a milliner’s shop in London, she couldn’t have been further from the minor nobility and affluence of Beatrice Portinari. Neither was Lizzie noted for her beauty: she first modelled for Walter Deverell in around 1849, when she was chosen for her plainness. Lizzie continued to model for Pre-Raphaelites, and in 1851-52 achieved fame as the model for John Everett Millais’ Ophelia.

Lizzie went on to become an artist in her own right, although her paintings are sadly neglected. In 1852, Lizzie moved in to live with Rossetti, but her health started to deteriorate, probably as a result of tuberculosis. When the couple married in 1860, she had to be carried around the corner to attend the church, in Hastings. She became depressed, and was addicted to laudanum (tincture of opium). In 1861, she had a stillborn daughter, and later that year became pregnant a second time. She died on 11 February 1862, as a result of what was almost certainly a deliberate overdose of laudanum.

Rossetti then went on to a more fictionalised watercolour of The First Anniversary of the Death of Beatrice (1853), showing Dante being comforted as he is drawing an angel on that day of remembrance for his beloved. This is situated in central Florence according to the view through the window at the right, but looking out of the door at the left, there’s an incongruous country garden.

As Lizzie’s health declined, Rossetti created more ornate and icon-like paintings of Beatrice. The Salutation of Beatrice from 1859-63 uses oil and gold leaf on conifer wood, set in a frame which Rossetti designed and painted himself. It brings together the literary Beatrice from Vita Nuova on the left, with the spiritual Beatrice from the Divine Comedy at the right, where they meet in earthly paradise atop Purgatory. On the frame are inscriptions taken from the respective works, and in the middle is the date and time (on a sundial) of Beatrice Portinari’s death in 1290.

Beata Beatrix was Rossetti’s next step, which he started in earnest two years after Lizzie’s death, in 1864, and completed in 1870, although he had been making preliminary studies when she was still alive. The background sets this in Florence, with its distinctive Ponte Vecchio over the River Arno, and the sundial sets the time as nine o’clock in the morning, the time of Beatrice Portinari’s death.

Behind the ecstatic figure of Beatrice are Dante (right) with his cap, and the angelic figure of Love at the left. Beatrice is pale and her death is approaching. Her eyes are closed, waiting for release. A red bird with a halo has brought her a poppy flower, a direct association with sleep and laudanum. Beatrice is unmistakeably Lizzie.

For once, we have the artist’s account of the reading of his own painting, in a letter Rossetti wrote to its first owner in 1871. He establishes that his literary reference is Vita Nuova, and the work embodies “symbolically the death of Beatrice as treated in that work.” But it doesn’t represent death as such, rather ‘renders’ it “under the semblance of a trance”, in which she is suddenly “rapt” from Earth to Heaven.

The red bird is the messenger of death, who drops a poppy flower into Beatrice’s hands, as she has closed her eyes to see the face of God. This could equally have referred to Lizzie rather than Beatrice.

Rossetti never worked this obsession out of his system. In 1871, he returned to the theme in what proved to be his largest painting ever, and was based on an original watercolour study (now in the Tate Gallery) he had made as early as 1856.

A decade after Lizzie’s death, Rossetti wove the more complex Dante’s Dream on the Day of the Death of Beatrice, of which this is the artist’s 1880 copy of his 1871 original. There are references to Beata Beatrix, in the red birds at the left and right edges, and his model for Beatrice was Jane Morris, wife of William Morris, the designer and his close friend. Jane Burden, as she was before her marriage to William Morris, had a similar background to Lizzie Siddall, from humble origins to artists’ model, then into the Pre-Raphaelite circle. Jane and Rossetti became lovers in around 1865, when he was still working on Beata Beatrix, but their relationship cooled later.

Rossetti casts the dream insert in red, for love, showing a red and winged angel of love kissing the dying Beatrice. He clutches not a flower – there are red roses strewn all over the floor – but an arrow of love.

The model for the woman on the right was Marie Spartali Stillman, and her husband William James Stillman modelled for Dante’s face: they will re-appear in the next article about Beatrice.

With Rossetti’s death in 1882, Beatrice and Lizzie should have been finally laid to rest, but they weren’t, as I’ll show in tomorrow’s final selection of paintings.