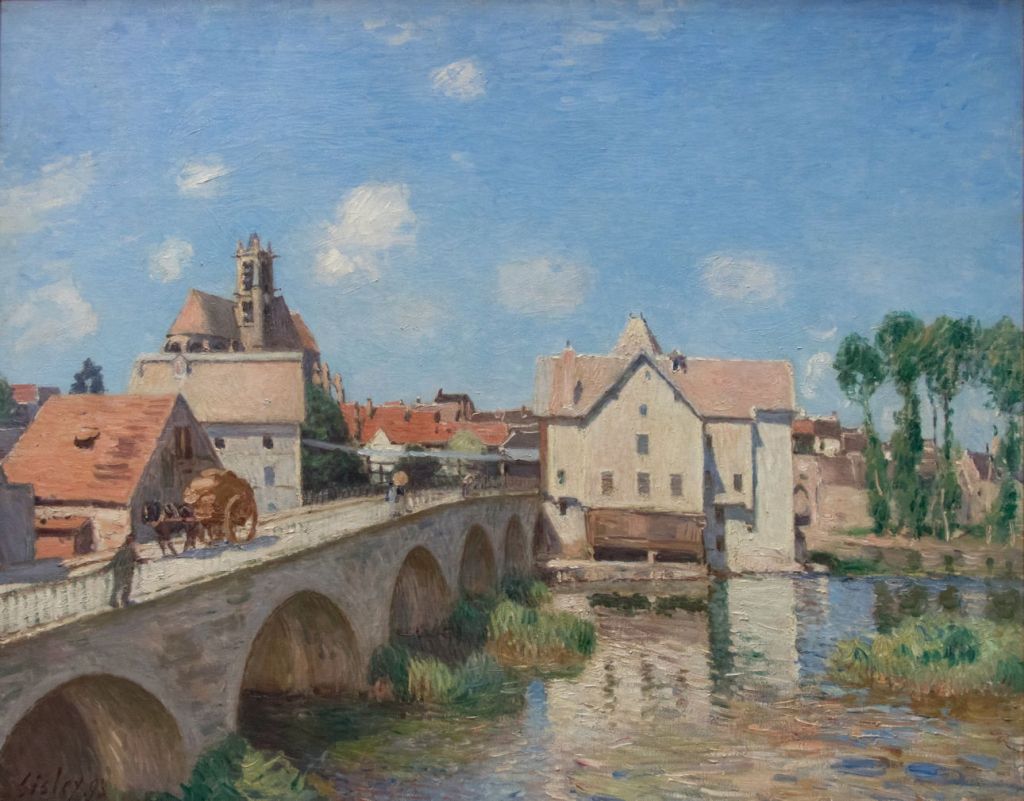 Of all the inner circle of French Impressionists, by 1890 only Alfred Sisley was still painting in the manner which had originally defined Impressionism, outdoors in front of the motif, rather than over a period of weeks in the studio. Despite (or perhaps because of) that, his paintings continued to attract low prices, when they did sell, and the Sisley family remained living in poverty in Moret-sur-Loing. He had at least received formal recognition in his election to the Société Nationale des Beaux-Arts in 1890, but that still didn’t pay the bills.

During the late 1880s, Sisley had started to develop informal series of paintings of similar motifs in different seasons and lighting conditions. In the early 1890s, these became steadily more formal and deliberate. The first theme he used in these series is of avenues of poplars at Moret, which he started to paint in 1888. He returned to them in 1890, from a different view, as shown by the bridge and trees on the left. Several of the poplars now appear much younger.

After another gap of two years, he painted a near-identical pair of paintings from a third location, shown above and below. These show a higher bridge further in the distance, and a bend in the avenue leading to some buildings. His marks on the trunks and in the foliage are more gestural.

These make up a small series of Poplars at Moret-sur-Loing, over the period 1888-92, of which I show just five below, but suspect that there are more to add to that.

In the same year he painted this barren winter landscape, with its pale stand of poplars beating their rhythm across the canvas before curving into the distance.

Even more formal and deliberate than the avenues of poplars is Sisley’s series of views of the bridge and town of Moret, which he had first examined in 1887, in the light of an imminent storm.

The Bridge at Moret, Morning Effect from 1891 looks at most of the span of the bridge from the bank of the river, adjacent to another stand of poplars. He maintains his long-standing emphasis on the sky, which occupies most of the canvas and sets the time and mood.

In Moret Bridge in the Sunlight from the following year, Sisley settles on an angle of view which proved his favourite, capturing the main spans of the bridge, the Porte de Bourgogne and the town’s Gothic church beyond.

A couple of years later, in The Bridge at Moret (1893), he returned to the east bank of the River Loing to show some of the traffic crossing the bridge.

This loose series of views of Moret-sur-Loing Bridge and Town happened to coincide with the period during which Claude Monet was working on his highly successful series of Rouen Cathedral, something which historians are agreed that Sisley couldn’t have known about at the time.

There is no doubt though that Sisley’s most formal and conscious attempt at series painting is that of the Church at Moret-sur-Loing, a tight series with two branches consisting of fourteen paintings, completed in 1893-4, when Monet was reworking his Rouen series in the studio.

Sisley’s emphasis in this series is shown well in The Church at Moret, Evening, from 1894, and is quite different from Monet’s. As MaryAnne Stevens puts it so well “Monet painted the air that lay between his eye and the façade”, while “Sisley focused on the physical mass of the structure, using different light conditions to accentuate his subject’s architectonic quality.”

Looking back at the early 1890s, Sisley considered that he had painted many of his finest works in and around Moret. Not only that, but he continued to do so as an Impressionist, working largely in front of the motif, which gives these paintings veracity.