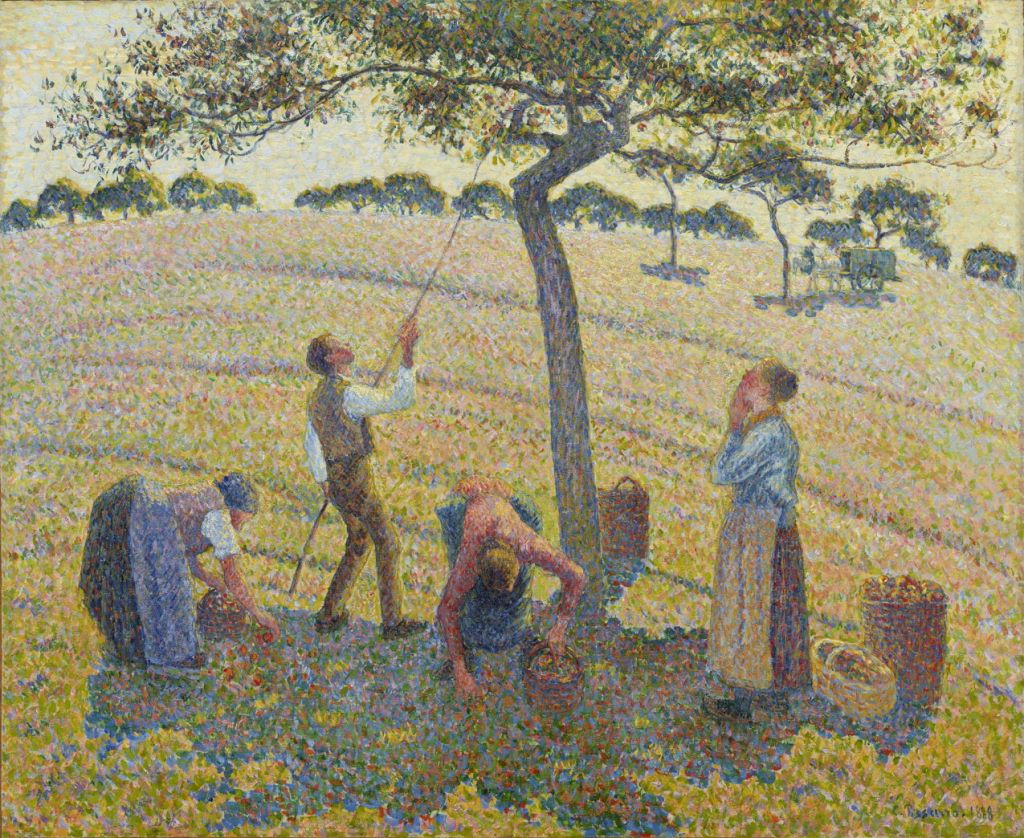 In January 1885, the Pissarros were living in the peaceful village of Éragny, unaware of the turmoil which was to come in the remaining years of that decade. Camille Pissarro dined fairly regularly in Paris with other leading Impressionists including Monet, Renoir, Sisley and their dealer Durand-Ruel.

He took the opportunity to visit Guillaumin in his studio, where he met the young painter Paul Signac for the first time, then in October, he met Georges Seurat, who explained their research and theories of Divisionism. As a result of these meetings and his own research, Pissarro concluded that Divisionism was the next phase in the logical progress of Impressionism.

Pissarro’s high Impressionist painting of Meadow at Bazincourt was completed in 1885, and adheres to the style expected of his landscapes at the time. It was sold to Durand-Ruel in June of that year.

A few steps away from the Pissarros’ house, at the entrance to the village of Éragny, was a small brickworks, which Pissarro painted in this view of the Delafolie Brickyard, Éragny from 1885. Claude Monet thought that they made cider there too, and asked Pissarro to obtain some for him.

Pissarro’s brushwork here – when there are no leaves on the trees – forms patterns of cross-hatching in places, and longer arcs in parts of the foreground.

Delafolie House, Éragny, presumably from later in the same year, judging by its rich green foliage, is a view of the brickmaker’s house from an upstairs window in Pissarro’s house. His brushwork has become finer again, but remains well within his Impressionist style.

Pissarro also painted at least one more fan, showing a ‘turkey-herd’, Girl in Field with Turkeys in about 1885. As with his others, this was painted in gouache on silk, then mounted on paper.

The following year (1886), the eighth and final Impressionist Exhibition was held in Durand-Ruel’s gallery in Paris, in May-June. This revealed to the public for the first time a large collection of Divisionist paintings by Pissarro, his son Lucien, Signac and Seurat. These included Seurat’s huge masterpiece A Sunday Afternoon on the Island of La Grande Jatte.

This sealed the fate of the French Impressionists as a cohesive group, as Monet, Renoir, Sisley and Caillebotte rejected Divisionism and refused to take part. Pissarro exhibited a total of twenty works there, including nine in oils, which confirmed him as a Divisionist, or Neo-Impressionist. Confrontation between the two schools resulted in open conflict at times.

Pissarro had started to paint this large studio work Apple-Picking in 1881, but ran into problems with its size and composition, and didn’t complete it until early in 1886. Meanwhile, he completed a similar composition in distemper as early as 1882. This later oil version was one of his works shown at the eighth Impressionist Exhibition, where its unusual square canvas and more Divisionist style proved popular with the critics. However, this didn’t translate into a sale.

In July, Pissarro passed it to Durand-Ruel for sale at 3,000 Francs, but it remained unsold. The artist then arranged for Georges Petit, who was more sympathetic to Divisionism, to take it on but he too was unsuccessful. After that, Pissarro became curiously uncertain as to what should become of it: in 1889, when Théo van Gogh was interested in trying to sell it, Pissarro refused, and it remained unsold at the time of the artist’s death.

That year, 1886, marked Pissarro’s most extended experiments in Divisionist painting, in which he painted landscapes using patches of colour of different sizes. However, his plans suffered a setback when Durand-Ruel decicded that he wouldn’t buy any Divisionist paintings from Pissarro.

In 1887, Pissarro became a fully-fledged Divisionist, a member of the Neo-Impressionists alongside Seurat, Signac, Luce, and colleagues. Paintings such as this of Farm Houses, Éragny (1887) leave no doubt. With Durand-Ruel not interested in such works, the artist sought other outlets. He found Vincent’s brother Théo van Gogh particularly helpful, and sold this through him for 300 Francs in March 1888. This wasn’t as much as his family needed, but at least it kept them from starving.

In the summer of 1887, Pissarro worked on another strongly Divisionist painting of Haymaking, Éragny. Although not a large canvas by any means, he found the work slow and tedious, something to occupy rainy days when he remained indoors. His labour was rewarded when this was taken on by Théo van Gogh, who sold it to a customer on the same day that he’d received it from Pissarro.

This later version of Apple Picking, Éragny had been largely completed in the autumn of 1887, but may have required further work early the following year. One of the canonical works of Neo-Impressionism, it was exhibited to favourable reviews at the Cercle de XX in Brussels in 1889. It too was bought by Théo van Gogh, in March 1888.

The Seine at Rouen, the Île Lacroix, Effect of Fog from 1888 is another of Pissarro’s best-known Divisionist paintings, and one of several to use fog to great effect. This was based on studies which Pissarro had made during his visit to the city back in 1883, five years before he started work on this finished painting. Once again, Théo van Gogh took this painting for sale, in November 1888.

Pissarro was unusual among the French Impressionists for his strong political views: he was an anarchist. Although he did draw gently on social realism, and had at times been accused of being a successor to Millet, most of Pissarro’s paintings of the rural poor are pastoral and idyllic, which I find hard to reconcile with his ardent anarchism, as if he wasn’t depicting social reality, but his political dreams.

The closest that he came to social realism was in this Flock of Sheep, Éragny from 1888, another of his finest Divisionist paintings. This was developed from a series of three drawings and a pastel study, following which Pissarro must have spent long hours in the studio applying the thousands of small marks from which the image is composed. It was then bought by Paul Signac in November 1888.

The following year, Pissarro’s intensely sensory and idyllic painting The Gleaners proved a lesson in the practicality of Divisionism. He had started work on this in early 1888, using a squared-up study in gouache to finalise his composition. He found the painting hard, and wrote that he needed models so that he could complete its detail. It was finished a year later in 1889, when he set his price at a mere 800 Francs. Although it achieved that, by the time that framing and commission charges had been deducted, Pissarro received just 620 Francs from Théo van Gogh’s firm.

Woman and Goat, Éragny from 1889 is a more modest Divisionist painting, similar to another from the same year, showing the woman pushing a wheelbarrow.

By the end of 1889, after three years of painting the most gloriously Neo-Impressionist works, Pissarro was worn out, and little better off for all those painstakingly slow canvases. He considered his future.

Tomorrow I’ll show a selection of Alfred Sisley’s landscapes from the same period.