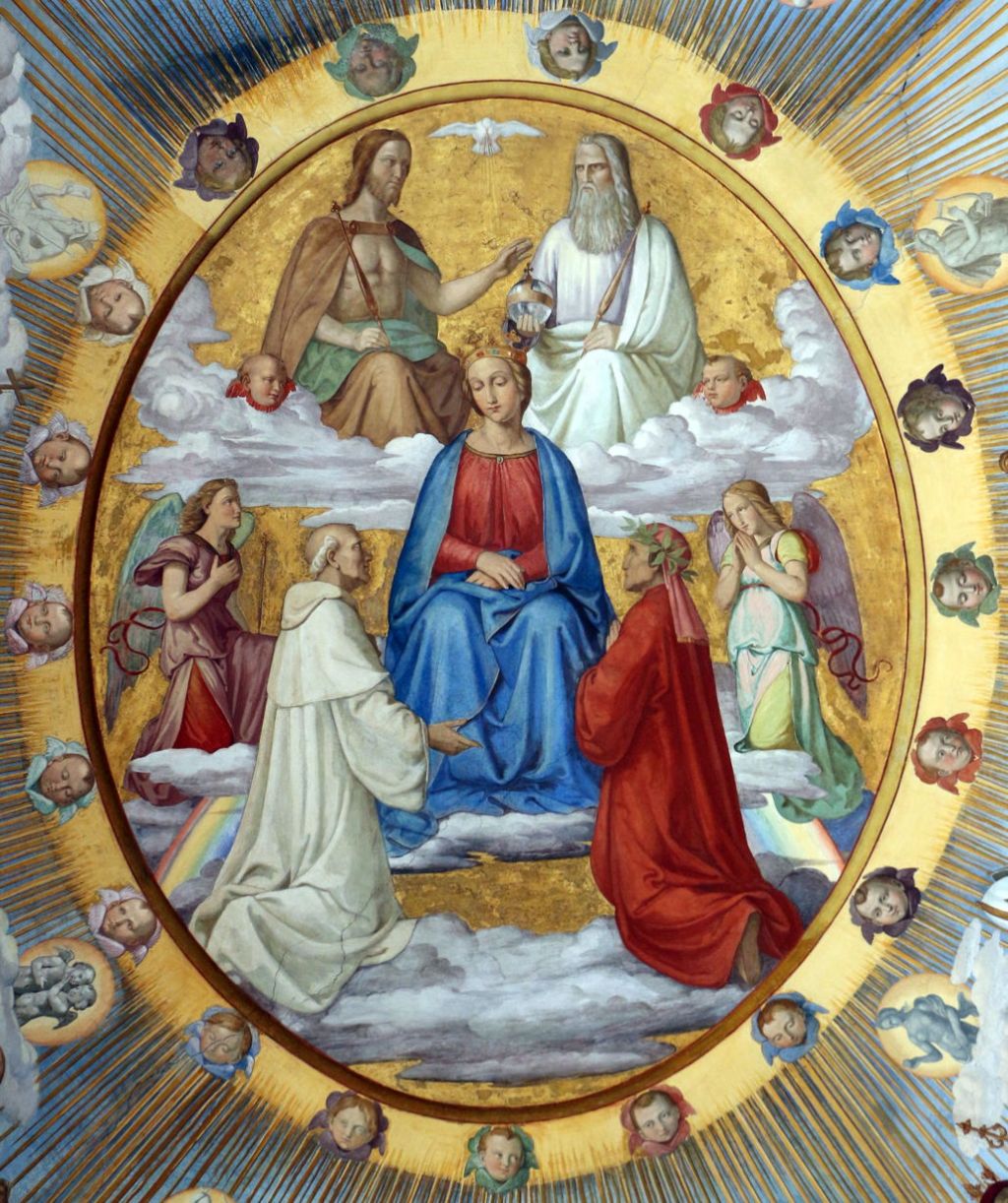 Dante and Beatrice ascend the golden ladder – previously Jacob’s Ladder – taking them up from the realms of the planets to the shell of fixed stars, where they arrive in Gemini, under whose sign Dante had been born. From here, Dante looks down on the poor little earth far below, then upwards to see the shining light of Christ himself, above his triumphant armies.

Dazzled, he looks down at Beatrice to recover his sight, then up again to see the Virgin Mary surrounded by the Archangel Gabriel. Dante is joined by the apostles Peter, James and John, who examine him in sequence on the Christian virtues of faith, hope and love, respectively.

Dante’s sight fails again from looking at the radiance of Saint John, but recovers once he looks back at Beatrice. They are joined by Adam, who answers Dante’s questions about when he was admitted to Paradise. Saint Peter then angrily condemns Pope Boniface VIII and his successors for their betrayal of the martyrs before them, and promises God’s vengeance.

The apostles rise up into the Empyrean, leaving Dante to gaze down at the earth, where he sees the route of Ulysses’ last voyage, before he is elevated upwards again to the first moving sphere (Primum Mobile), responsible for transmitting the motion generated by God’s love down to the lower spheres; it is thus the origin of time. After Beatrice condemns the contemporary lack of moral leadership, Dante turns to look at what is reflected in her eyes: a brilliant point of light surrounded by nine whirling concentric rings of fire, each being an order of angels.

Beatrice tells Dante more about angels, before informing him that there are more angels than the total of human words or thoughts. They then move up to the final zone, the Empyrean, the mind of God which exists beyond time and space – the real home of the angels, and of all the spirits in celestial heaven. Here Dante sees a river of light which transforms into a circle, in which angels leap out like sparks from the light into the flowers of blessed spirits on its banks.

This circle then changes into a celestial white rose, in which are thousands of tiers of spirits.

Beatrice reveals that one place in the flower is being held ready for the soul of Henry VII. Saying that, she rejoins her place in the flower, her task of guiding Dante now handed over to Bernard of Clairvaux (1090-1153), a persuasive orthodox Cistercian monk who became abbot of the monastery at Clairvaux. Bernard prays to the Virgin Mary for the completion of Dante’s journey.

Dante then sees past the light to understand how the universe is held together by God’s love. His closing visions are of the Holy Trinity as three circles and the mystery of the Incarnation.

He has now completed his journey, and this book and the whole Divine Comedy are concluded.

Giovanni di Paolo di Grazia (c 1403-1482) was a prolific Italian painter who worked primarily in Siena, and was one of the more important members of the early Sienese School. He started work painting miniatures, later making some important altarpieces as well. He created sixty-one images of Paradise for the “Yates Thompson” Dante commissioned by King Alfonso V, and now in the British Museum in London.

Philipp Veit (1793–1877) was a German Romantic painter who was partly responsible for the revival of fresco techniques in the early nineteenth century. He was a pupil of Caspar David Friedrich in Dresden, and later trained in Vienna. A prodigious draftsman, he preferred watercolours to oils. He went to Rome where he joined the Nazarenes, later returning to Frankfurt, where he became professor.