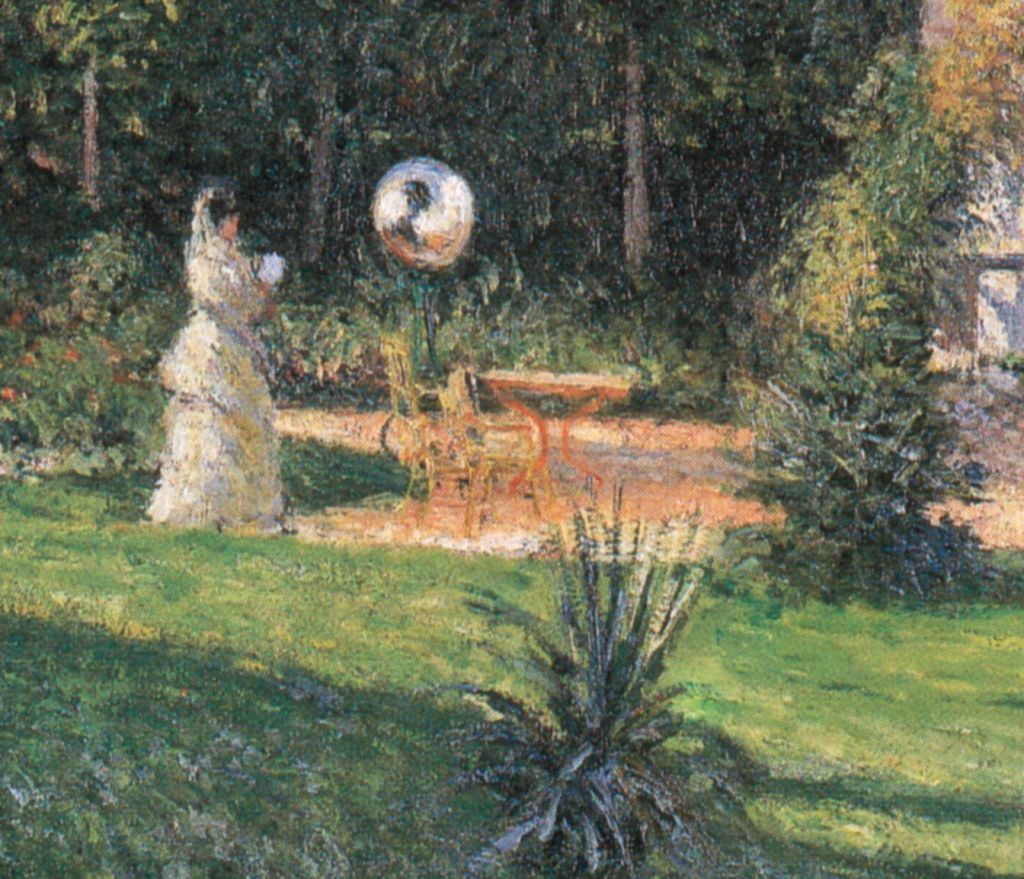 During the mid 1870s, Camille Pissarro often painted in company with Paul Cézanne, who credited Pissarro with being his major mentor during his Impressionist period in northern France. The late 1870s were a period of intensely productive painting for both artists, and many of Pissarro’s finest Impressionist landscapes were created then.

The year 1875 didn’t start well. Pissarro spent the winter with their friends at Montfoucault, where the calm he so badly needed after the First Impressionist Exhibition was broken by the news that their new Impressionist society was in debt to the tune of over three thousand Francs, and had to be liquidated. Durand-Ruel was also suffering financially: he closed his London gallery and stopped buying Pissarro’s paintings.

In February, with snow still falling, the Pissarros returned to their house in Pontoise, for Camille to paint there again. Effect of Snow at L’Hermitage, Pontoise (1875) strikes a good balance between an impression captured in haste, and sufficient detail to make it more than just a passing moment.

In 1875, a few of Pissarro’s paintings seem to have been influenced by Cézanne. Perhaps the best example is The Small Bridge, Pontoise, which could easily be mistaken for one of Cézanne’s views in the woods of northern France.

View of the Côte des Gratte-Coqs, Pontoise from the same year is also less distinctively one of Pissarro’s works.

Over the summer of 1875, the Pissarros sank more deeply into debt. By the autumn they had no choice but to join their friends the Piettes at Montfoucault until the New Year.

In the autumn of 1875, Pissarro painted this large plein air oil sketch of Cows Watering in The Pond at Montfoucault, from which he made an even larger finished version in his studio. The second painting was bought almost immediately by his cousin Alfred Nunès, and this initial study was sold rather later to Durand-Ruel.

The following year, Pissarro painted another large view, this time of one of the gardens in Pontoise which features in many of his works of this time: The Garden of Les Mathurins at Pontoise, belonging to the Deraismes Sisters (1876). In fact, the sisters were only renting this large and impressive property, which was just down the road from where the Pissarros lived, in the Hermitage district of Pontoise. It had formerly been a convent until the French Revolution.

One of the two sisters, Maria Deraismes, is seen standing in front of an ornamental burnished sphere (detail below). She was a famous figure of the day, an early feminist who founded her own newspaper and more.

Pissarro’s painting of this garden is unusually large, and possibly his first work in which he achieves finely textured colour as a precursor to his later Neo-Impressionist style. This was exhibited at the Third Impressionist Exhibition in 1877.

In complete contrast, the same year (1876), Pissarro painted some views of the commercial barges trading on the River Oise, including this of Barges at Pontoise, the only canvas in which the boats dominate his composition. This painting remained unsold at the time of the artist’s death, and wasn’t even exhibited until 1936.

The Oise near Pontoise in Grey Weather is another of his views of the River Oise from 1876.

Still in severe financial distress, despite the Second Impressionist Exhibition in April 1876, in the autumn the Pissarros returned to Montfoucault for some peace.

Cézanne and Pissarro continued to paint together, as is demonstrated from this view of the Côte des Bœufs, Pontoise in 1877, for which Cézanne painted a matching view from the same location. The barren trees break up the red-roofed houses of the town beyond, superimposing their diruptive rhythm.

This painting was exhibited at the Third Impressionist Exhibition in April, but remarkably remained unsold at the time of the artist’s death.

Pissarro also painted the same view in landscape orientation, in The Red Roofs, Côte Saint-Denis at Pontoise, Winter Effect. This was exhibited at the Third Impressionist Exhibition, and was bought by Gustave Caillebotte, who provided the Pissarros with some invaluable financial support.

In the Spring of 1877, Pissarro painted another of his favourite garden views, The Jardin de Maubuisson, Pontoise, Spring, which was bought nearly a year later by Gustave Caillebotte.

The Rainbow, Pontoise, which Pissarro painted in 1877, was shown at the Third Impressionist Exhibition too. It’s a panoramic view of the fields around the neighbouring area of Épluches viewed from Pontoise.

The autumn of that year saw the Pissarros on their way to Montfoucault for the fourth year in succession. However, their friend Ludovic Piette, on whose hospitality they had relied, died of cancer the following April.

Côte des Grouettes, near Pontoise was probably painted in 1878, and given the patch of purple flowers is presumed to have been made in the Spring. This painting was bought by Durand-Ruel in 1888 for 440 Francs.

Edgar Degas encouraged Pissarro to paint fans, and for the Impressionist Exhibition of 1879, proposed a whole room devoted to these delicate works made in gouache on silk. Nothing more became of it, but Pissarro’s surviving painted fans are simply stunning, and still little known.

The Cabbage Gatherers is thought to have been painted between 1878-79, and shows countrywomen harvesting cabbages in the fields near Pontoise. Although not given its own room at the Impressionist Exhibition, this was probably exhibited there, and appears to have been commercially successful: this was bought fairly quickly by one of Pissarro’s first American collectors, Louisine Elder, who was to become Mrs. H. O. Havemeyer. It appears that Mary Cassatt may have arranged the purchase and acted as Elder’s agent.

In November 1878, Julie Pissarro and their children moved into a rented apartment in Paris, for her to give birth to their next child; Camille remained painting in Pontoise. In April, the Fourth Impressionist Exhibition opened in Paris, where at last Pissarro’s paintings started receiving more favourable critical recognition.

The last painting from this period is something of a puzzle: The Hay Cart, Montfoucault was made in 1879, and is to all intents and purposes an oil sketch painted there during the harvest en plein air. The only snag with that is that Pissarro’s last visit to their friends in Montfoucault had been in 1877. It’s therefore presumed to have been painted in the studio.

Tomorrow I’ll show a selection of Alfred Sisley’s paintings from the same period.