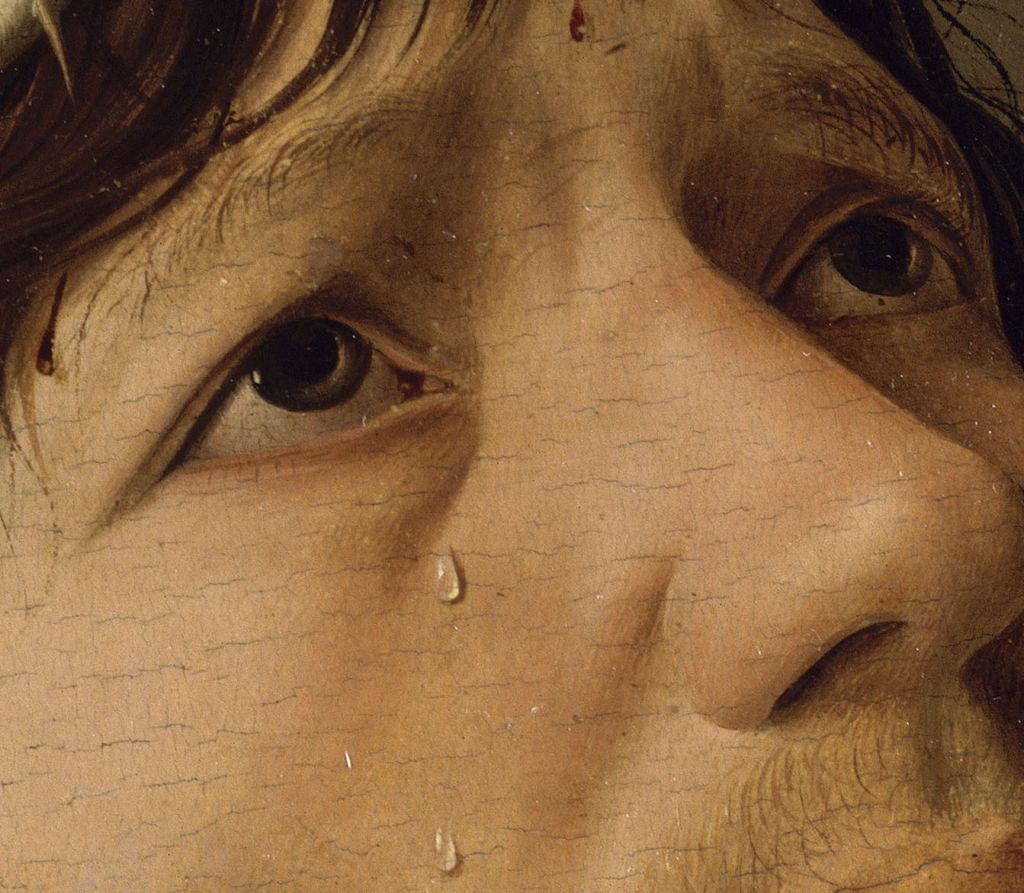 By September 1476, the pioneering Italian oil painter Antonello da Messina (c 1430–1479) had returned from Venice to his home city of Messina on the island of Sicily. Information about his whereabouts after that is limited, although it’s presumed that he worked mainly from his studio there, but may have travelled back to Venice from time to time. Although Messina and Venice are almost as far apart as two cities can be in Italy, there was considerable trade between the two, and travelling by ship wouldn’t have been particularly difficult – but still, by modern standards, slow and hazardous.

Antonello continued to gain commissions for portraits, and painted one of his finest in this Portrait of a Man, popularly known as the Trivulzio Portrait, in 1476. Unfortunately its provenance is not known before it entered the collection of the Marquis Giorgio Teodoro Trivulzio in Milan in 1857. It may show a wealthy Milanese merchant, perhaps.

The earlier Dead Christ Supported by Three Angels (1476-77) appeared in Venice, suggesting that it was probably commissioned for a church in that city. At some stage the heads of Christ and the angels were abraded right down to the ground, and the panel was cut down too, but what remains today after extensive conservation work gives a hint as to its original quality. The church at the right (between the angel’s wings) has been identified as that of San Francesco in Messina, implying that this must have been painted in that city not Venice.

Its simpler sibling, Dead Christ Supported by an Angel, was probably painted slightly later, in 1477-78, and despite similarly lacking any provenance until the nineteenth century, was discovered in Spain. It’s also in far better condition, allowing us to see the brilliant realism of its figures and their facial expressions, complete with the angel’s deep anguish and tears. Christ’s face here is very closely related to the next of Antonello’s masterpieces.

Christ at the Column, painted in about 1478, is another of Antonello’s paintings which is one of the masterpieces of European oil painting. The head of Christ here is almost identical to that of the pieta above, to the point where the artist is thought to have used the same cartoon for both, but here showed the eyes open and looking up to the heavens.

Amazingly, this painting didn’t appear until 1863, when it was bought by the chief curator at the South Kensington Museum in London from a dealer in Granada in Spain. It was originally attributed to Andrea Solario, and wasn’t recognised as Antonello’s until the twentieth century. After display in the National Gallery in London, it was bought by the Louvre in 1992.

One of a series of similar works painted by Antonello and his studio, it is surely the finest and most expressive.

Antonello shows his supreme skill in manipulating oil paint, right down to the two small tears on Christ’s cheek, and the congealed droplet of blood just below the hairline.

Antonello’s last surviving secular work is thought to be this Portrait of a Young Man from 1478, which is very Venetian in its style. This has been associated with the the style of Giovanni Bellini, who was in many ways Antonello’s artistic heir.

Probably Antonello’s last (surviving) religious painting is this complex and sophisticated account of the martyrdom of Saint Sebastian, painted in 1478-79. Distinctively Venetian, with architectural references to that city, it is agreed to have been part of a triptych in the church of San Giuliano in Venice, where it stood on the altar of the confraternity of San Rocco, which was established in 1478.

In 1556, the church roof collapsed, causing considerable damage to this painting. It then passed through various collections on the assumption that it too had been painted by Bellini, and was transferred to canvas, before being recognised as one of Antonello’s when it was exhibited in Vienna in 1873.

The saint is statuesque in his suffering, tied to an isolated tree trunk in a meticulously-projected piazza. His posture, shoulders in particular, proved of great influence in subsequent Venetian paintings.

Antonello died suddenly in early 1479, at the height of his art, aged about 49. His studio continued to work successfully on mainly local commissions, but Antonello’s greatest legacy was in the north, in Venice in particular, where many of his finest paintings continued to be studied by generations of artists, among them no doubt Leonardo da Vinci when he was in Venice in 1499-1500.

If any individual artist brought oil painting to Italy in the late fifteenth century, it was surely Antonello da Messina.