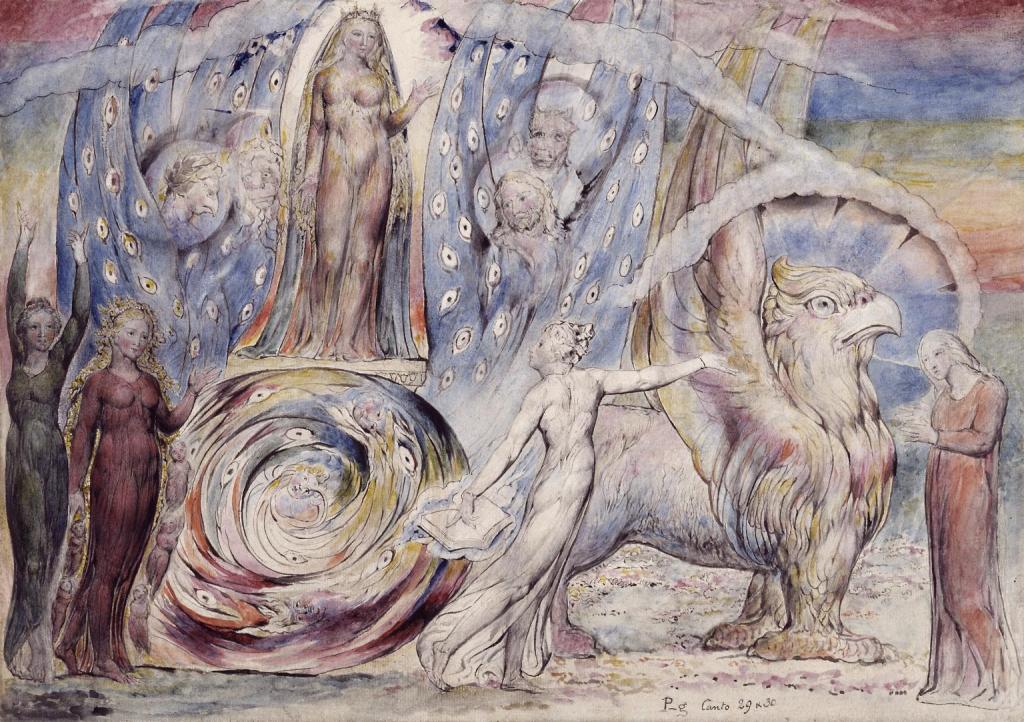 The final cantos of Dante’s ‘Purgatory’, from the meeting with Matelda (also known as Matilda) to the end of this book, have been enormously popular among artists. However, there has been confusion between the two main figures, Matelda and Beatrice, and Dante wrote about Beatrice extensively in two other works, ‘Paradise’ and ‘Vita Nuova’. Disentangling these isn’t easy, so for continuity and consistency I cover the conclusion of ‘Purgatory’ in this and the next article, which will appear here tomorrow.

It’s also worth noting in passing that if modern identification of Beatrice is correct, as Beatrice Portinari, she and Dante were both married to their own spouses at the time of Beatrice’s death. Dante’s declared love for Beatrice was emphatically ‘courtly’ rather than physical, and therefore could have been considered not to be adulterous.

Soon after Dante, Virgil and Statius enter the terrestrial paradise at the top of the island-mountain of Purgatory, Dante comes across a beautiful woman on the opposite bank of a stream. She is gathering flowers, and tells Dante that he is in the Garden of Eden. She is Matelda, and leads him to a holy procession.

In the middle of that stream of people is a two-wheeled ceremonial chariot being drawn by a Gryphon, whose huge golden aquiline wings stretch out of sight. There’s a clap of thunder, and the procession comes to a halt opposite Dante. He sees the figure of his beloved Beatrice inside the chariot, amid lavish ornamentation and garlands of flowers. She has a white veil, a green robe, and a dress the colour of flame. Their reunion brings him elation, which is quickly dashed when he realises that his companion Virgil has quietly departed.

Beatrice steps out of the chariot and, standing beside it, admonishes Dante for straying from the path of righteousness after her death some years before.

This reduces Dante to tears of contrition, and he faints away.

George Dunlop Leslie (1835–1921) was a British painter who trained at the Royal Academy Schools in London. He specialised in genre painting, and was also a successful illustrator. He became part of the Saint John’s Wood Clique, and was influenced by the Pre-Raphaelites although his own style remained light academic. The painting shown here was exhibited at the Royal Academy in 1860, and was well-received by critics. It was bought by a wine merchant known for his collection of works by Rossetti, Alma-Tadema, Leighton, and Arthur Hughes.

Carl Wilhelm Friederich Oesterley (1805–1891) was bornn in Göttingen, Germany, where he earned his doctorate in art history, and became a professor in the field. He was also a keen painter, particularly of religious works, and was court painter to the Kingdom of Hanover, Germany.

Andrea Pierini (1798–1858) was an Italian artist about whom almost nothing is known today.

John William Waterhouse (1849–1917) was an eminent British painter from an artistic family, who trained at the Royal Academy Schools in London. His early works were influenced by Alma-Tadema and Frederic Leighton, but he became increasingly influenced by the Pre-Raphaelite movement, particularly Rossetti and Millais. Many of his paintings have literary and mythical themes. By 1915, when he painted the works shown here, he was gravely ill with cancer, from which he died in 1917.