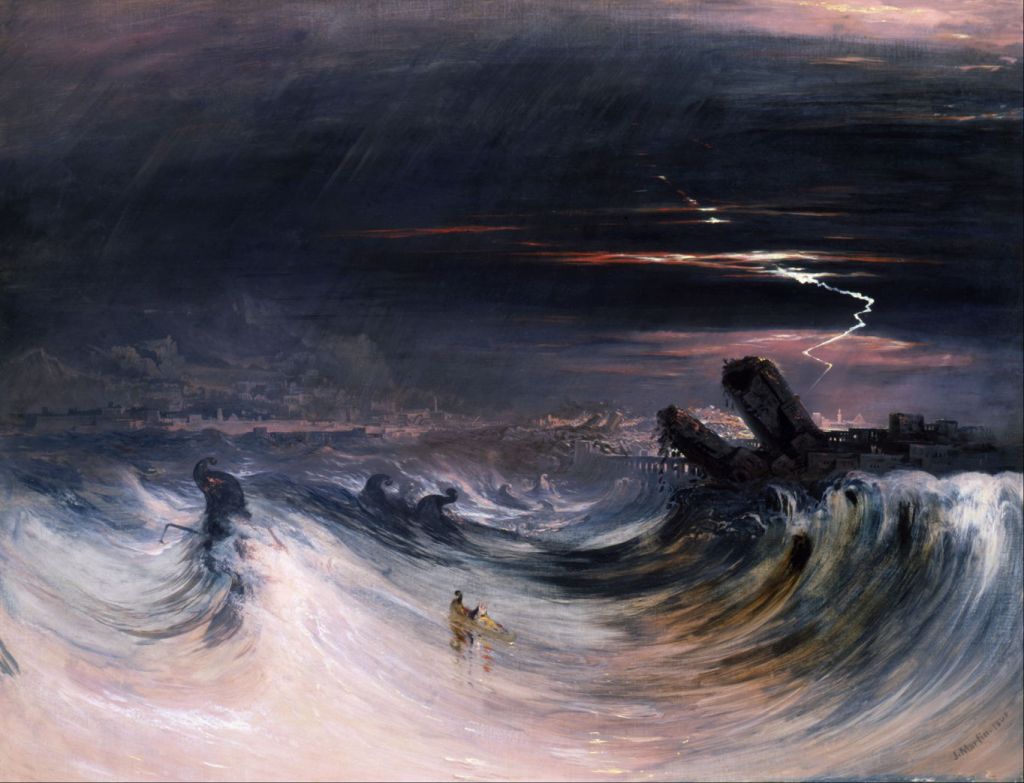 In the first of these two articles looking at paintings of thunderstorms and lightning, I showed a succession of landscapes which didn’t attempt to tell stories. Here, I look at some paintings in which the storm is part of a narrative: every lightning bolt tells a story.

In classical Greek and Roman mythology, it is Jupiter (Zeus) who holds the thunderbolts, and his inflammatory skills cause problems when he rapes or seduces the lovely Semele, and makes her pregnant. She then insists that he reveals himself in all his glory – something guaranteed to destroy her by divine incineration.

Tintoretto’s Jupiter and Semele (1545) shows an early moment in the story. Semele, who does at least look pregnant, is reclining naked under a red tent. Jupiter has evidently just revealed himself, and rolls of cloud are rushing out from him. There are flames licking at Semele’s tent, and around the clouds which surround Jupiter, but no sign of them touching Semele yet, nor causing her any distress or concern. The danger may be imminent, but it has not yet struck.

The myth of Philemon and Baucis also revolves around Jupiter visiting humans, this time in innocuous human form and in company with Mercury. After the elderly couple have entertained the two gods, they go outside and ascend a mountain while the land below becomes flooded.

Rubens’ Stormy Landscape with Philemon and Baucis (c 1625?) is a dramatic landscape with stormclouds building over the hills, bolts of lightning, a raging torrent pouring down the mountainside, and the four figures on a track at the right. Philemon and Baucis are struggling up the track with their sticks, Jupiter points to a rainbow formed over a waterfall at the lower left corner, and Mercury is all but naked.

Niobe incurred the wrath of the gods for her insufferable pride, which brought the goddess Leto to send the hunters Apollo and Diana to kill all her children.

Richard Wilson is much better-known as an early and innovative landscape painter, and the founding father of painting in Wales. His The Destruction of Niobe’s Children from 1760 is a classical history-in-landscape, with a bolt of lightning in the centre far distance, a chiaroscuro sky, and rough sea below. Wilson shows the story when Apollo is still killing Niobe’s sons. The god is at the top of a steep bank on the left, with Niobe among her children down below.

No doubt Wilson had seen some of Nicolas Poussin’s wonderful narrative landscapes. Among them is his telling of the tragic love affair between Pyramus and Thisbe, set in one of his finest landscapes.

The city of Babylon is in the distance, along a picturesque and pastoral valley. But the peacefulness of this landscape has been transformed by the sudden arrival of a thunderstorm: the gusty wind is already bending the trees, and near the centre of the view a large branch has broken with its force. Two bolts of lightning make their way to the hills below.

There is frantic activity in response not only to the storm, but to a lioness which is attacking a horse, whose rider has fallen. An adjacent horseman is about to thrust his spear into the back of the lioness, while another, slightly further ahead, is driving cattle away from the scene. Others on foot, and a fourth horseman, are scurrying away, driven by the combination of the lioness and the imminent storm.

In the foreground, Pyramus lies dying, his sword at his side, and his blood flowing freely on the ground, down to a small pond. Thisbe has just emerged from sheltering in the cave, has run past the bloodied shawl at the right, and is about to reach the body of her lover. She is clearly distraught.

The apocalyptic British painter John Martin told the semi-historical story of The Destruction of Tyre in his relatively small painting of 1840. Tyre was the great Phoenician port on the Mediterranean coast, claimed to have been the origin of navigation and sea trade. Its importance and the generally good nature of its merchants and other citizens allowed it to be spared destruction for a long time. However the prophet Ezekiel (chapter 26) fortold that one day, many nations would come against Tyre, would put the city under siege, break her walls down, that the fabric of the city would be cast into the sea, and it would never be rebuilt.

Nebuchadnezzar put Tyre under siege in 573 BCE, and eventually Alexander the Great destroyed the city in 332 BCE.

Martin brings the forces of nature in to help destroy the port, with a storm great enough to sink many vessels, leaving their prows floating like sea monsters. In the distance is his standard lightning bolt, and the city has clearly been broken down to fragments of masonry.

Many mythologies contain accounts of a ‘great flood’, and it has long been a popular theme for paintings.

Adam Elsheimer’s The Great Flood (c 1600) is fairly conventional. It is nighttime, and the dense clouds are lit only by flashes of lightning. The population of a village is processing up to higher ground to escape the rising floodwaters. Faces are anxious, but there is no terror or panic.

Poussin turned to this in his very late painting of Winter, in his series of seasons. Lightning crackles through the sky as a few survivors try to escape the rising waters.

Inevitably, John Martin was attracted to this theme too, in his The Deluge from 1834. The lightning bolt coming from the right here seems to target a small group of survivors who are walled in by enormous waves. The presence of both the sun and the moon together makes it clear, though, that he is referring to a non-Biblical account of a great flood resulting from an adverse alignment of the sun, moon, and earth and coincident impact of a comet.

Prominent in Adi Holzer’s modern account of The Flood from 1975, from his Noah Cycle, is a bolt of lightning. He also shows the Ark tossed around on the waves, splashes of white foam, a toothed shark, a whale, and a tiger stranded on a rock. In the foreground, and clearest of all, is a single person, gasping for breath, their left hand held up in a bid for aid.

William Blake found his lightning strokes in the book of Revelation, chapter 4 verses 2-11, as part of the nightmare visions of the end of time.

His The Four and Twenty Elders Casting their Crowns before the Divine Throne from about 1803–5 follows the text:
And immediately I was in the spirit: and, behold, a throne was set in heaven, and one sat on the throne. And he that sat was to look upon like a jasper and a sardine stone: and there was a rainbow round about the throne, in sight like unto an emerald. And round about the throne were four and twenty seats: and upon the seats I saw four and twenty elders sitting, clothed in white raiment; and they had on their heads crowns of gold.

And the four beasts had each of them six wings about him; and they were full of eyes within: and they rest not day and night, saying, Holy, holy, holy, Lord God Almighty, which was, and is, and is to come. And when those beasts give glory and honour and thanks to him that sat on the throne, who liveth for ever and ever, the four and twenty elders fall down before him that sat on the throne, and worship him that liveth for ever and ever, and cast their crowns before the throne, saying, “Thou art worthy, O Lord, to receive glory and honour and power: for thou hast created all things, and for thy pleasure they are and were created.”

In painting six from Louis Janmot’s Poem of the Soul, Fatherly Roof, the subject’s family are at home during a thunderstorm, shown by the flashes of lightning at the window. Grandmother reads a psalm to calm the spirit, while the mother and another young woman sit and sew. Father (a self-portrait at the age of thirty) looks on with concern. An even older woman, perhaps the great-grandmother, sits in the shadows near the window.

In Norse mythology, it is the god Thor who wields thunderbolts. Mårten Eskil Winge’s painting of Thor’s Fight with the Giants (1872) shows this less well-known battle, but provides rich detail, such as the two goats which draw Thor’s chariot. In other circumstances those goats might have looked rather feeble, but Winge makes them as ferocious as Thor himself. How the lightning plays around Thor’s mighty hammer.

When Dante visits Hell with Virgil as his guide, in the first book of his Divine Comedy, there’s a lightning strike where Charon is ferrying souls across to eternal torment.

As Dante and Virgil are trying to convince Charon to take them both across, there is a violent gust of wind , a red bolt of lightning, and Dante becomes unconscious. This is shown in Alexander Litovchenko’s painting above, from 1861.

William Shakespeare’s tragedy of Macbeth has remained a popular play, and has frequently been used for narrative paintings. In an early scene, three witches meet with Macbeth and Banquo on a “heath”. Macbeth, who is the Thane of Glamis, and Banquo are King Duncan of Scotland’s generals, who have just defeated the allied armies of Norway and Ireland. The witches address Macbeth as Thane of Glamis, Thane of Cawdor (which he is not), and “King hereafter”. The witches are more enigmatic in their pronouncements for Banquo’s future, then they vanish.

In John Martin’s account, three witches materialise from a swirl of mist and lightning bolts on the left, and Macbeth and Banquo appear surprised at their sudden arrival. Winding around the shores of the distant lake is the huge army, and Martin has turned the Scottish Highlands into rugged Alpine scenery of the Burkean sublime – an indication of the much greater outcome of the meeting.

My last lightning-struck narrative is more modern, almost certainly fictional, and a good candidate for a Darwin award.

Late in his career, Benjamin West decided to paint a large portrait of his friend and fellow Philadelphian Benjamin Franklin (1706-1790), to give to the Pennsylvania Hospital, which Franklin had founded. Although he never completed that work, this smaller study, painted unusually on slate, of Benjamin Franklin Drawing Electricity from the Sky (c 1816), is now one of his best-known works.

In 1752, Franklin may have conducted experiments in Philadelphia to demonstrate that lightning is electricity. The experiment shown, in which the scientist allegedly flew a kite in a thunderstorm and observed a spark pass from a metal key on the kiteline to his hand, is famous, foolhardy to the point of being suicidal, and almost certainly never occurred.

West turns this legend into a romantic allegorical fantasy, with Franklin sat on a platform of clouds, surrounded by naked putti-like children who are pulling on the kiteline and playing with a static electricity generator at the left. West also leaves us with the puzzling pale and ghostly image of a kite in the sky behind. It cannot be the kite on the end of the line, which is up to the left, nor can it be its shadow.