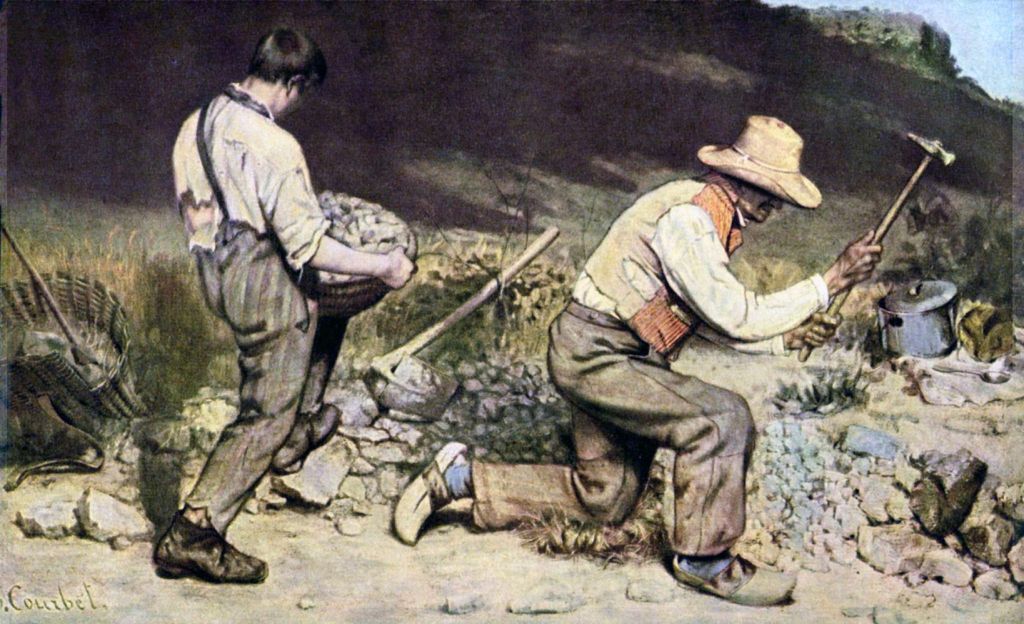 Among the immediate precursors to the great art movements of the late nineteenth century, Naturalism and Impressionism, were Eugène Delacroix, Camille Corot, and Gustave Courbet (1819–1877). In a month’s time, we’ll be celebrating the bicentenary of Courbet’s birth, and I hope that you’ll join me in this short series of articles looking at his career and work.

Jean Désiré Gustave Courbet was born to a prosperous but thoroughly provincial farming family, in the small rural town of Ornans, in the far east of France not too far from its border with Switzerland. He drew and painted during his youth, using his sisters Zoé, Zélie and Juliette as models. When the time came for him to pursue his artistic education in Paris, in 1839, he retained strong roots with his birthplace, the land and its people.

In Paris he started work in the studios of Steuben and Hesse, but quickly became disenchanted with the traditional system, and spent much of his time making copies of masters in the Louvre, so was essentially self-taught.

Dated to about 1841, this portrait of his younger sister Juliette Courbet at the Age of Ten was presumably made when the artist had returned home to Ornans after he had moved to Paris. Although obviously an early work, this unusual part-profile already demonstrates Courbet’s desire to be different.

Other early paintings were literary in theme, but Courbet abandoned those in favour of self-portraits, of which several have survived. The most radical and impressive of these is The Desperate Man from about 1843, in which he grimaces wildly at his own canvas. Augmented by his signature in bright red, it might have been his manifesto. A more conservative Self-portrait with Black Dog from the same period was accepted for exhibition at the Salon in 1844.

Related to that self-portrait is The Man Made Mad with Fear, again from 1843-45, which he left incomplete. This shows him dressed in gaudy clothes, out in the landscape near Ornans, with its rolling hills and white cliffs.

By 1844, when he painted The Dream or The Hammock, Courbet had set his sights on figurative painting. This young woman is not quite respectably dressed, and reclines in what looks to be an unstable position as she dozes on a hammock slung between trees.

The following year, Courbet planted another gaudily-dressed figure at the foot of some cliffs near Ornans, put a small mallet in his right hand and a chisel in the other, and painted The Sculptor (1845). The subject of this sculptor’s inattention is the emerging form of a woman in the rock just above his left knee, which is over a small pipe from which water is pouring into the stream.

Courbet chose another unusual angle and pose for his charcoal study of a Young Man Sitting, Study, also known as At the Easel, from about 1847.

He visited the Netherlands and Belgium in 1846-47, where he became committed to a realist approach, and was influenced by Rembrandt and Frans Hals. This inspired him to create his first two successful paintings.

After Dinner in Ornans from 1849 was exhibited that year at the Salon in Paris, and earned him a gold medal as well as being purchased by the French State. It marks the start of Courbet’s series of ‘realist’ paintings of everyday life in his home town. The four middle-class men here have just finished dining together, probably one summer’s evening. As one lights a tobacco pipe, the man at the right plays his violin to entertain them.

A large hunting dog is curled asleep under a chair, and the man lighting his pipe is still wearing his hat and a long coat. Many fine details give the impression of real veracity, although Courbet almost certainly painted it in his studio using local models.

Sadly, Courbet’s most successful and important painting of his early career was destroyed during the Allied bombing of the German city of Dresden in 1945: The Stone Breakers (1849).

One of the surviving images of this painting is of sufficient quality to give an idea of what it must have looked like. It was exhibited at the Salon in 1850, and marks the dawn of Naturalism. The artist later explained that he encountered this group of men on the roadside one day, apparently when he was in Ornans. He felt they were so complete an expression of poverty that he was immediately inspired to paint them, and invited them to attend his studio the following morning.

Two men are working beside a rural road near Ornans, breaking rocks into smaller stones used to provide a surface for the road. Both their faces are obscured, giving them anonymity, and their clothing is badly worn, torn, and frequently patched. The man on the right kneels on one knee as he brings a long-handled hammer down to break a rock, while the other carries a large wicker basket of broken rocks. One wears wooden working clogs, the other a pair of worn-out leather shoes.

Like the many thousands of other such teams who would have been scattered around the roads of France at the time, they are living on the job, at the roadside, their pot and a large cooking spoon on a sheet at the far right. Later paintings of other stonebreakers were made by John Brett in 1857-58, and by Hans Andersen Brendekilde in his People by a Road (1893), which I show below.

Before he had even completed The Stone Breakers, Courbet had already started work on an even greater masterpiece, A Burial at Ornans, one of the canonical paintings of the century.