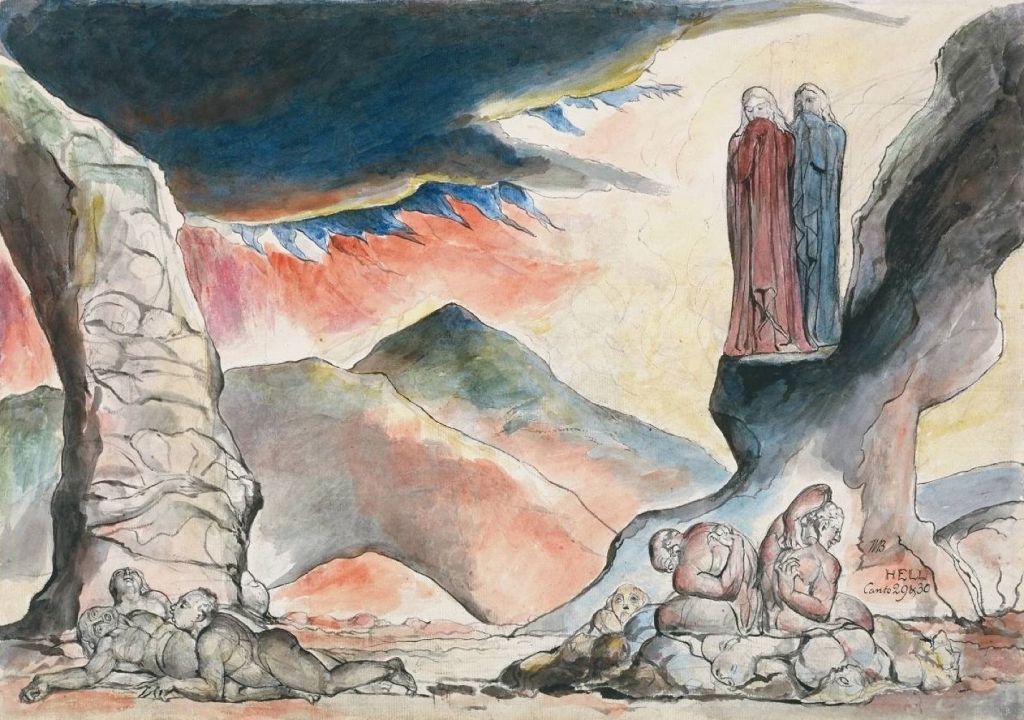 After talking with the notorious thief Vanni Fucci, who becomes pinned down by snakes, Dante and Virgil move on and meet a centaur, identified by Virgil as Cacus, who had been killed by Hercules. Dante’s classical reference here is a little odd in that he gives an account of the killing of Cacus according to that of Livy, rather than Virgil’s version in his Aeneid.

The centaur flees, and they meet three more tormented souls. A lizard-like creature then attaches itself to one of them named Agnello, a member of a prominent Florentine Ghibelline family, and the two bodies become one. Another is pierced by a serpent through his navel, and Dante witnesses other horrific transformations of the sinners here with reptiles.

Having found five citizens of Florence in this rottenpocket of Hell, Virgil leads Dante through shattered rock to the next, the eighth, where each of the souls is burning with fire in the pit in return for their fraudulent lives.

Virgil explains that among them are Ulysses and Diomedes, who are united in a single flame, which tells an invented story of their final and fateful voyage. Dante didn’t have direct access to Homeric accounts of the adventures of Odysseus, and based this on Virgil’s contrasting retelling of the deception of the Trojan horse.

After that, another flame identifies itself as Guido da Montefeltro, and relates some of its life as a sly Ghibelline military leader who later repented and became a Franciscan friar.

Virgil takes Dante on to the ninth rottenpocket, where those who used fraud to incite division are suffering for their crimes. The gruesome sight that awaits them here is of gross mutilations, bodies chopped up and torn apart so that their organs spill out. They meet a succession of dismembered and dissected spirits, including Mosca de’ Lamberti, both of whose hands have been cut off. Mosca was responsible for creating the rift between Guelphs and Ghibellines which scarred Florentine history for so long. Another body passes by without a head, which it is carrying like a lantern from one of its hands. The head tells them that he is Bertran de Born, a Provençal troubadour who sowed discord between King Henry II of England and his son Prince Henry.

Dante is so astonished by this display of butchery that he stands and stares at the bodies. For this Virgil reminds him that they have limited time and must move on.

The pair then reach a viewpoint over the last of the rottenpockets, from which arises a foul smell. The souls there are all covered with festering sores and scabs, and can only crawl over one another.

There they hear the story of Capocchio, an alchemist who falsely claimed to be able to transform base metals into gold.

Jan van der Straet, also commonly known by his Italianised name of Giovanni Stradano (1523-1605), was a painter who started his career in Bruges and Antwerp in Belgium, but moved to Florence in 1550, where he worked for the remainder of his life. Mannerist in style, he worked with printmakers in Antwerp to produce collections of prints, including an extensive set for The Divine Comedy.