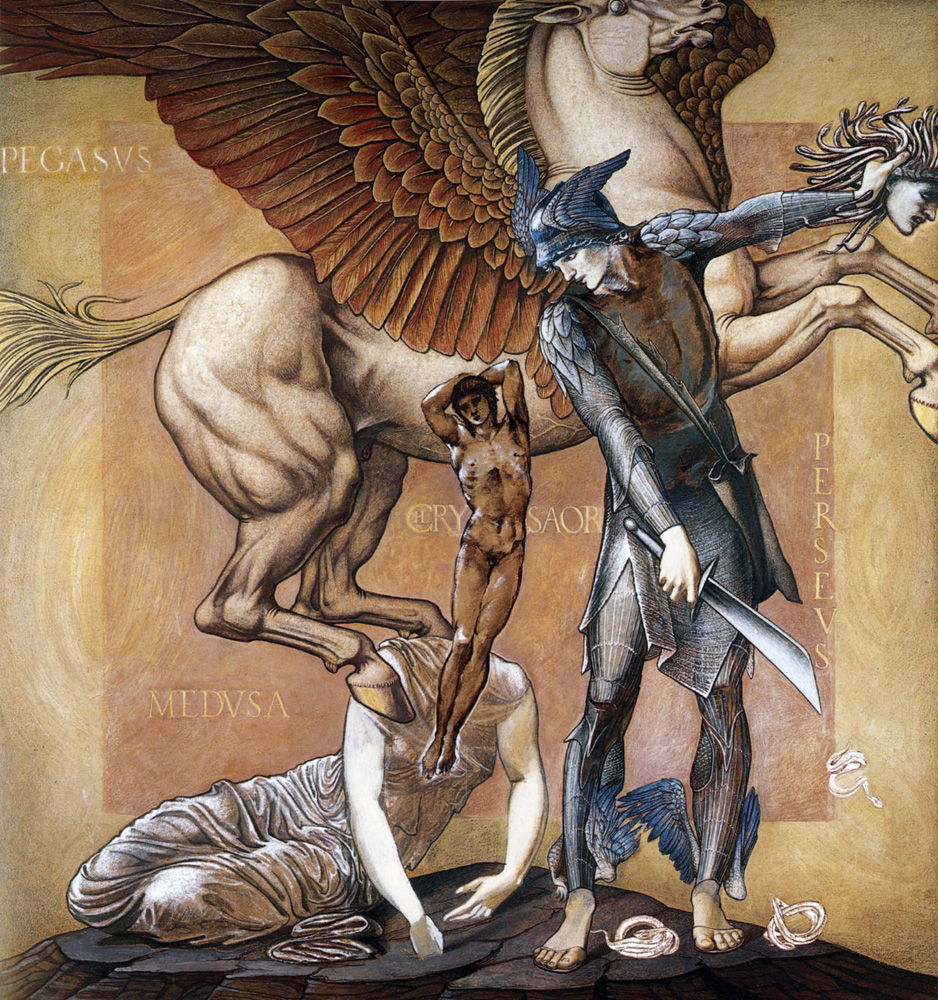 In yesterday’s first of this pair of articles, I looked at paintings of the terrifying Medusa. This concluding article follows the story of her life, or rather the end of her life at the hands of Perseus.

Perseus was the heroic son of Jupiter and Danaë, conceived when the god, in the form of a rain of gold, entered her prison cell in the royal palace at Argos. When Polydectes fell in love with his mother, he wanted Perseus out of his way, so held a large banquet at which each guest was expected to bring a gift of horses. Knowing that Perseus was unable to do that, Polydectes accepted a substitute offer in which he, the host, would name his gift – and Polydectes promptly chose the head of Medusa, anticipating that Perseus would die when attempting to obtain it.

With the help of Minerva, Perseus went to the Hesperides, who supplied him with the weaponry that he needed for his mission: a bag (kibisis) into which he would put Medusa’s head, Jupiter’s adamantine sword, Hades’ helmet of darkness to conceal him, Mercury’s winged sandals with which to fly, and Minerva’s polished shield.

Perseus found the three Gorgon sisters Medusa, Stheno and Euryale, when Medusa was asleep in her cave. Because direct vision of her face would have turned him into stone, he did this by looking at her reflection in Minerva’s shield. He then cut Medusa’s head off. He fled, with the other two Gorgons in hot pursuit, cloaked by the helmet of darkness. As he left with Medusa’s head in his kibisis, from her severed neck sprang the winged horse Pegasus and Chrysaor, a sword of gold.

Although Baldassare Peruzzi must have been very familiar with the story, his fresco in the Sala delle Prospettive of the Villa Farnesina in Rome takes a very liberal approach. Perhaps to simplify his composition and make the action more direct in Perseus and Pegasus from 1510-11, Perseus looks straight at his victim. The white head of Pegasus, at the right, refers to events later in time than those at the left, an example of multiplex narrative, which was popular at the time.

Eugène Romain Thirion’s Perseus Victorious Over Medusa from 1867 keeps to convention, with the hero holding Medusa’s head aloft, facing away from him, in triumph. He shows Pegasus behind, but not Chrysaor, who is in general omitted from these paintings, and indeed from some verbal accounts.

The most detailed telling of this story is in the magnificent paintings in Edward Burne-Jones’ Perseus series. Here I show three of the studies for that which he completed in gouache in 1881-82, now among the treasures of Southampton City Art Gallery in England.

The fourth and unfinished study for the series, The Finding of Medusa (1882), shows Perseus, wearing the helmet of Hades for invisibility, brandishing his adamantine sword, and viewing the scene in his mirror, in the Gorgons’ cave. Medusa, her hair yet to be detailed into snakes, is stood with a fearsome expression, while her two immortal sisters are scrunched together under their wings.

In the fifth in the series, The Death of Medusa I (1882), Perseus has just cut Medusa’s head off, and holds it aloft with his left hand, at the far right edge of the painting. The adamantine sword is still in his right hand, and the kibisis is slung around his neck. Emerging from the severed neck, as if in collage, are Pegasus and Chrysaor, the latter shown as the associated person and without his characteristic curved golden sword. Three of the serpents from Medusa’s head have detached and fallen to the ground.

The sixth in the series, The Death of Medusa II (1881-2), completes the story of Medusa, as Perseus flees from the remaining two Gorgons. The headless body of Medusa is left on the ground, and her sisters fly around searching for her assailant. Perseus wears the helmet of Hades to maintain his invisibility, and is flying away with his winged sandals, while inserting Medusa’s head in the kibisis.

Sadly, none of these three paintings ever made it into a finished work in oils.

Perseus then flew off to North Africa, where he used the head of Medusa to turn Atlas into stone for his lack of hospitality. On his way back from there, he called into the kingdom of Aethiopia, where the royal princess Andromeda had just been chained to a rock to assuage a ravaging sea monster, Cetus. Like a true hero, Perseus saved the girl and killed the monster.

Andromeda’s parents were so delighted that Andromeda, who had been promised in marriage to Phineus, was quickly married instead to Perseus. At the wedding feast, Phineus and his friends were understandably rather miffed, and a violent quarrel broke out between them and Perseus. As happens at the most memorable of weddings, this turned seriously nasty when weapons came out and bodies started to fall. The solution for Perseus was to brandish the head of Medusa and turn Phineus and his friends into statuary.

Annibale Carracci and Domenichino combined their talents in painting this fresco of Perseus and Phineas (1604-06) in the Palazzo Farnese in Rome. As Perseus stands in the centre brandishing the Gorgon’s face towards his attackers, Andromeda and her parents shelter behind, shielding their eyes for safety.

In Giordano’s Perseus Turning Phineus and his Followers to Stone from about 1683, the process of petrification is made less obvious, but the carnage and mayhem better-developed.

Ricci’s Perseus Confronting Phineus with the Head of Medusa from about 1705-10 also shows the final moments of the battle, as Phineus cowers next to two of his henchmen who have almost completed the process of changing into stone.

Suprisingly, none of those paintings made any reference to Minerva’s protection of Perseus, which is clearly expressed in Jean-Marc Nattier’s undated painting of Perseus, Under the Protection of Minerva, Turns Phineus to Stone by Brandishing the Head of Medusa. The goddess, Perseus’ half-sister, is sat on a cloud to the right of and behind the hero. She wears her distinctive helmet, grips her spear, and her left hand holds the Aegis, providing narrative closure.

Perseus points his weapons away from himself and Minerva, and is looking up towards the goddess. In the foreground, one of Phineus’ party seems to be sorting through the silverware, perhaps intending to make off with it.

The happy couple picked themselves up from the bodies, statues and debris, and moved on. Perseus gave thanks to Minerva for her support and the loan of her shield, by the votive offering of Medusa’s head, which Minerva had set into her shield, turning it into the Aegis which I showed in the previous article.

And that was the fate of the terrifyingly beautifully tragic Medusa.