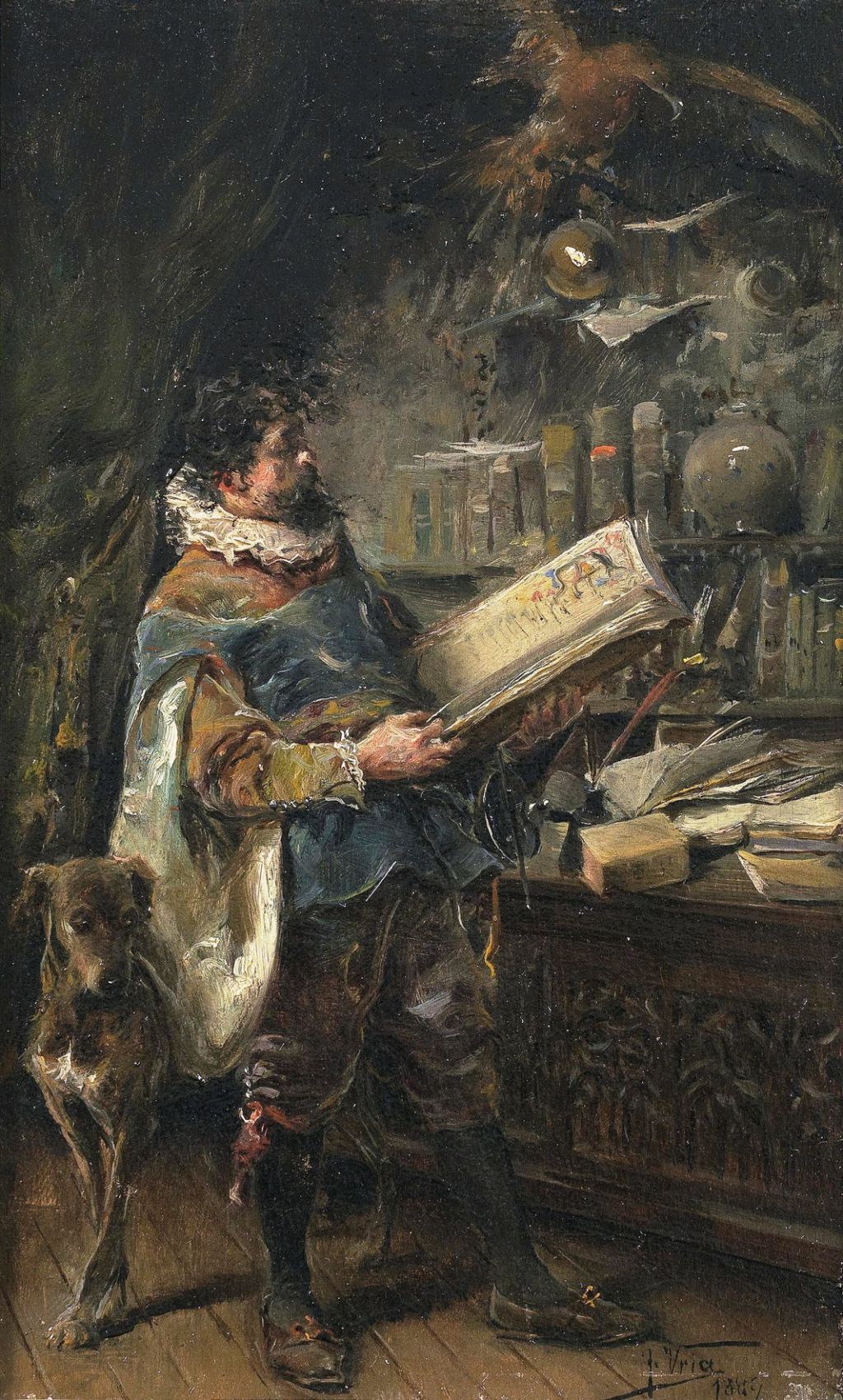 Part One of Goethe’s Faust opens with a short dedication, which starts to build the air of history and mystery for the play. This is followed by a curious prologue which is a prolonged aside between the play’s director, the dramatic poet, and a comic clown.

The first real scene of the play proper, still called a prologue though, is set in heaven, and starts with a rhythmic and lyrical hymn to the Lord spoken in turn by the archangels Raphael, Gabriel, and Michael, concluding with the three of them speaking four lines of praise together. (When you read this, do so out loud from a modern rhymed translation such as David Luke’s – it is superb.)

Mephistopheles then speaks respectfully to the Lord, being critical of the earth-god. The Lord chides him for always complaining about what is happening on earth. Mephistopheles says that tormenting humans is no fun.

The Lord then asks Mephistopheles if he knows his faithful servant Doctor Faust: although Faust serves him, he does so in confusion, and will be led to greater clarity soon. Mephistopheles sees this opportunity for a bet, that he can lead Faust astray. The Lord agrees, so long as it is only while the doctor is alive, and doubts whether he’ll succeed with such a good man. The Lord and his archangels then depart.

The prologue concludes with Mephistopheles acknowledging how good it is of the Lord to have such meetings even with the devil himself.

The main part of the play opens in Faust’s study, a narrow room with high Gothic vaults. Faust is seated at his desk.

Faust starts with a long soliloquy in which he establishes that he has studied philosophy, jurisprudence, medicine and theology, but is now “no wiser than before”. For all this effort, he hasn’t grown rich in money or property, only yearns to free himself from his studies by going up into the mountain air where he can renew his spirit.

Georg Friedrich Kersting’s Faust in His Study from 1829 is a very early painting, made at the time of the publication of Goethe’s revised edition of Part 1 of the play.

Faust opens a book of mystery, in which there is a sign of the “Macrocosmos” and the words of Nostradamus. This is more exciting to him, and he feels it is starting to unlock the spirit world for him, drawing him nearer to the earth-spirit.

Rembrandt’s remarkable etching of A Scholar in his Study was made in 1650-54, one hundred and fifty years before the first publication of Goethe’s Faust. It was presumably based on one of the chapbooks (pamphlets) of the day describing the growing legend of the time, or on Christopher Marlowe’s play.

For the history painter Jean-Paul Laurens, Faust was a much older man in this undated portrait.

Faust seizes the book and speaks “the sign of the spirit” to conjure up a spirit in a red flame. Faust and the spirit exchange words, the latter calling the doctor a “demigod” before disappearing as quickly as it came.

Wagner, Faust’s student, knocks at the door and distracts his teacher in conversation. The student then leaves Faust to his own thoughts, in which he expresses how constrained he is. He then sees a small phial of “soothing anodynes” for him to drink. He pours the elixir into a pure crystal goblet and puts it to his lips to drink – an action which could even be suicidal.

As the goblet touches Faust’s lips, there is a peal of bells, and the sound of choral voices proclaiming that Christ is risen, which announce the dawn of Easter Day. This is followed by further celebratory singing about the resurrection of Christ. The scene ends abruptly with Faust stopping short of drinking his potion.

The next scene is set outside the city gate and walls, later that morning, as people walk out in the country. Various students, young men and women of different classes and occupations discuss where to go to find a partner, for a holiday, or just beg for alms.

Faust and his student Wagner appear, the doctor describing the effects of Spring on the countryside, city, and its people.

Otto Schwerdgeburth’s painting of Faust’s Easter Stroll from 1864 shows the pair in the centre, amid a jostle of people walking out in the bright spring sunshine.

Faust and Wagner reach a linden (lime) tree, around which villagers are singing and dancing. An old woman expresses her gratitude to the doctor for saving so many of their lives in the past, and the villagers join in praising him.

Faust walks on to a rock, where he says he used to sit, fasting and meditating in the hope that the villagers would survive. He practised Black Arts in an effort to save them, but only poisoned more in the process. Wagner reassures him that he did his best for the patients. Faust then starts to wax philosophical about there being two souls in search of opposites, but is interrupted when he sees a large black dog in a nearby field. The dog circles them and then approaches. They lead it back into the city through the gate.

The next scene opens as Faust enters his study, the black dog in tow.

José Uría y Uría’s Faust from 1889 shows this moment faithfully. But that black dog isn’t all it seems to be.