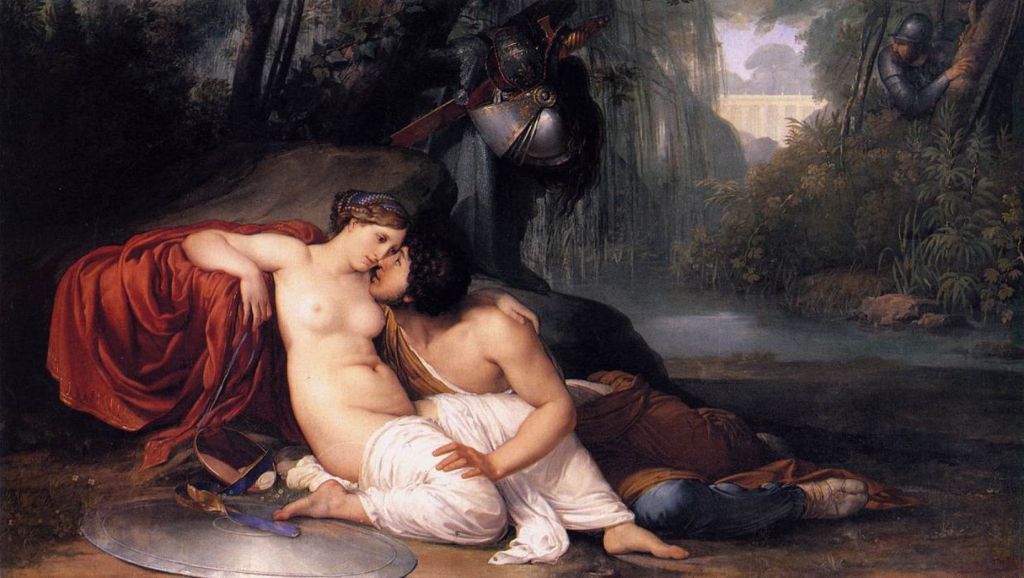 Tasso’s Jerusalem Delivered features six leading characters, three men and three women. In this my final article looking at this epic and its paintings, I’m going to look at their stories and fate.

The three leading men are Godfrey of Bouillon, Prince Tancred, and Rinaldo. The leading women are Clorinda the ‘pagan’ knight, Princess Erminia of Antioch, and Armida the sorceress. Immediately one fact is apparent: his heroes are all crusaders, but the heroines all ‘pagans’, supposedly their enemies.

The hero of heroes according to Tasso was Godfrey of Bouillon, who led the crusaders to a remarkable victory. Current historical analysis differs: despite the astonishing success of the crusaders at Jerusalem, at no time did they appear to have a single person in overall command, and much of their success was due to Count Raymond of Toulouse rather than Godfrey.

As with Tasso’s poetry, the paintings of Godfrey portray him as a pious warrior, as in this section of Johann Friedrich Overbeck’s magnificent frescoes in the Casa Massimo, in Rome. Here The Archangel Gabriel Appears to Godfrey of Bouillon, reminding him of the pressing need to get on with the delivery of the Holy City.

This is reiterated in Overbeck’s Consecration of Godfrey, where Peter the Hermit stands holding the crucifix, as Godfrey, still wearing his armour, sinks on bended knee.

As a pious knight and leader, Godfrey never succumbs to the temptations offered by Armida. As far as we are told, he remains pure and celibate even in mind, his sole mission being to deliver the city.

Tancred and Rinaldo are very different, hot-blooded young knights who fight like there’s no tomorrow, and engage in amorous adventures which get about as explicit as you’ll encounter in literature of this period. But their relationships are each unusual.

Clorinda, one of two women warriors featured by Tasso (the other being Gildippe, a crusader), is in love at first sight with Tancred.

Clorinda is portrayed from her arrival as upholding the standards of chivalry, fighting fairly if ferociously, and being morally sound. She first arrives on her charger and holds up her right hand to tell those about to burn Olindo and Sophronia at the stake to hold fire, and quickly secures their release.

She has a vindictive streak, though, which manifests itself when she decides to torch the wooden siege towers after the first day’s assault on the city walls. This backfires when she is caught outside those walls by Tancred; knowing it is him, she forces him to fight, resulting in her death.

Predictably perhaps for a Catholic of his age, Tasso ends this part of the story with her baptism in the moments before her death, shown so brilliantly in Domenico Tintoretto’s Tancred Baptizing Clorinda of about 1585. Tasso also provides details of Clorinda’s ‘unfortunate’ upbringing outside the Christian faith of her mother, reinforcing that her sacrifice in battle was to her ultimate benefit in the life after death – a very moralising thread.

From the start, Erminia is noble, cultured, and in love with Tancred, who had treated her well after the fall of Antioch and the slaughter of the rest of her family. But her love for Tancred isn’t returned: he is smitten by Clorinda instead.

That sets up an almost comical situation, in which Tancred leaves the crusaders’ camp in pursuit of a woman he thinks is Clorinda whom he loves, who is in fact Erminia (who loves him) wearing Clorinda’s armour.

Eugène Delacroix shows this in his Erminia and the Shepherds of 1859, a detail of which I show above. Here is Erminia dressed as Clorinda, with Tancred erroneously in pursuit, heading for trouble in Armida’s magic castle.

Tasso doesn’t exploit this confusion any further, but picks up the one-sided relationship again when Argante is dead and Tancred badly wounded, outside Jerusalem. Erminia gets her chance to revive the ailing Tancred, sacrificing her tresses to fabricate improvised bandages.

This is shown best in Alessandro Turchi’s Erminia Finds the Wounded Tancred (c 1630). We are left in suspense over the further development, even consummation, of this relationship.

By far the most complex of Tasso’s characters is Armida. The niece of a ‘pagan’ ruler and sorceror Hydrotes, her mission is to wreak havoc in the crusader camp, and so destroy command, unity, and morale – something she seems to do very well indeed.

But Tasso is ambiguous about Armida, and early on reveals some of the complexity of her character. In a lyrical passage about a rose in her garden, Tasso’s poetry inspired Marie Spartali Stillman’s exquisite watercolour of A Rose in Armida’s Garden from 1894.

Having literally seduced many of the crusaders, led them astray, and sold them into slavery, she gets her hands onto Rinaldo, who has stormed off under Godfrey’s over-zealous sentence of death. Although Prince Tancred (whom she also imprisons for a while) is one of the crusaders’ finest knights, Tasso repeatedly shows Rinaldo as the most valiant of all. This may have something to do with Rinaldo being a fictional ancestor of Tasso’s patron.

Armida’s original plan was to beguile Rinaldo and murder him, but she falls in love and devises a more mutually satisfying fate: she abducts him to her enchanted garden, where he becomes her on-call gigolo.

Francesco Hayez in his Rinaldo and Armida from 1812-13 is almost as explicit as Tasso’s lines in depicting their relationship. It is only the arrival of Charles and Ubaldo who save Rinaldo from a life of empty pleasure, making love not war. This they achieve by getting the knight to see himself for what he has become, reflected in a shield.

Hell hath no greater fury than Armida spurned: with her lover’s departure, she joins forces with the King of Egypt to exact her vengeance, being promised Rinaldo’s head on a plate, in the manner of John the Baptist’s for Salome. I am a little hesitant over drawing that parallel, as Salome wasn’t really developed into a femme fatale until the nineteenth century.

The last great battle to secure Jerusalem, which is probably based on the crusaders’ battle at Ascalon, is thus not just between Godfrey and the King of Egypt, representing the forces of God and those of the devil, but a personal feud between Armida and Rinaldo.

That concludes with Armida in despair, trying to take her own life with one of her arrows – Cupid’s symbolic bolt of love – and Rinaldo rescuing her. He then promises to be her servant and her champion, in the hope that true faith will be revealed to her and convert her to Christianity.

Armida has often been compared to Circe and other sorceresses who anticipated the more modern concept of the femme fatale. Tasso’s Armida is still more complex, and the fate of her relationship with Rinaldo left open to speculation.

I hope that you have enjoyed my summary of Tasso’s epic, and some of the wonderful paintings which it has inspired. When you next see a painting titled Rinaldo and Armida, for example, you should now be able to read it with confidence and insight.

Wikipedia on Jerusalem Delivered.
Wikipedia on Torquato Tasso.
Wikpedia on the First Crusade.