For some days now, the App Store has been promoting various apps, particularly what it terms “writing apps” which “revel in Dark Mode”. Although several of these are specialist products, I thought it would only be appropriate to see which of them and other major ‘word processors’ do fully support Dark Mode at present.

One very important issue here is which you can rely on to create styled text (Rich Text) for use elsewhere. For example, if you want to compose a Secure Note to store in your keychain.

Like other apps built on macOS’s TextKit, Keychain Access is sensitive to the styling of text which you paste into it. TextKit supports two types of colour styling: bimodal, which it displays correctly in both Light and Dark Mode, and unimodal, which doesn’t change colour with appearance mode. If you mistakenly use black unimodal text, it will vanish when you view it in Dark Mode; if you use bimodal text instead, it will be shown as black on a white background in Light Mode, and white on a black background in Dark Mode, which is what you want.

Among the apps which the App Store lists as revelling in Dark Mode is Apple’s own Pages, currently in version 7.3. It doesn’t support ‘full Dark Mode’ which changes the text background, so you can’t preview your work. If you copy from Pages and paste into any app using TextKit, the text is set in unimodal black, and there’s no way to change that. The same happens if you open a Rich Text file exported from Pages. Even worse, if you paste in text from another app which does create bimodal styled text, Pages switches it to unimodal black.

Pages 7.3 therefore doesn’t support TextKit’s tools to cope with Dark Mode. It doesn’t “revel in Dark Mode”, but falls apart and is incompatible with Rich Text in Dark Mode.

Microsoft Word 16.19 doesn’t, by Microsoft’s own admission, support Dark Mode, but it’s promised in a future release. It too fails to generate or handle styled text in an bimodal way, although it does at least display bimodal text pasted into it correctly. Try to use it to create bimodal text, though, and it’s no better than Pages. 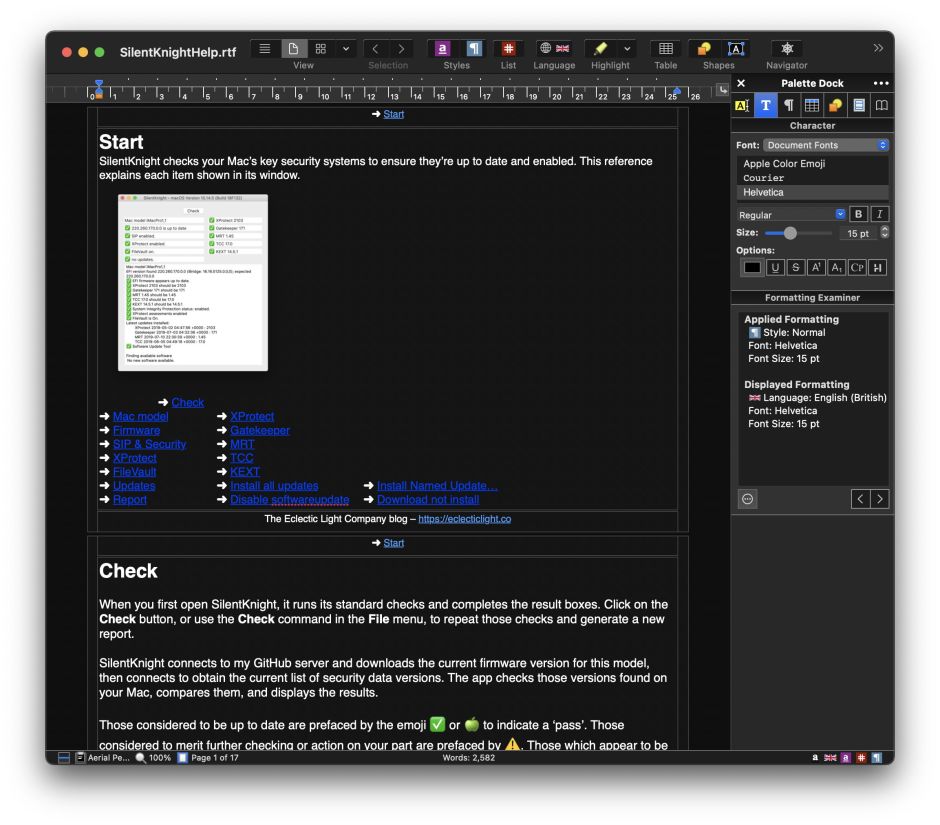 Nisus Writer Pro 3.2 is my favourite word processor, which I use to generate the PDF documentation for all my apps. This latest version supports Dark Mode thoroughly at last, including bimodal text. You can now use its full range of high-end features in the knowledge that they’ll be rendered correctly no matter whether they’re viewed in Light or Dark Mode. Congratulations to Martin and the team at Nisus.

I have previously slated Apple’s bundled TextEdit in Mojave 10.14.2, and despite its Dark Appearance for windows, it too works primarily in unimodal black text. Copy from it and paste into a TextKit-based app and all you will get is fixed black letters, and it writes RTF files in the same unimodal way too. Like Nisus Writer Pro and Microsoft Word, it does at least respect bimodal text when it is pasted into a document, though, and that is retained in the RTF files which it writes.

My own DelightEd, as you’d expect, uses TextKit to handle its styled text, and is currently the only Rich Text editor that I have which fully supports and preserves bimodal text.

Six months after Apple explained how to support bimodal text in Mojave, at WWDC, this is appalling. Although Dark Mode is a minority appearance, for the App Store to be promoting products which don’t comply with the guidelines Apple laid down back in June is surely misleading users, and only going to make their problems worse.

My conclusion: don’t trust “writing apps” or word processors which claim to “revel in Dark Mode”. They almost certainly don’t. If you want your Rich Text to be readable in both appearance modes, you know what to create it in, it’s in Downloads above, or if you want a full-featured document editor, try Nisus Writer Pro.