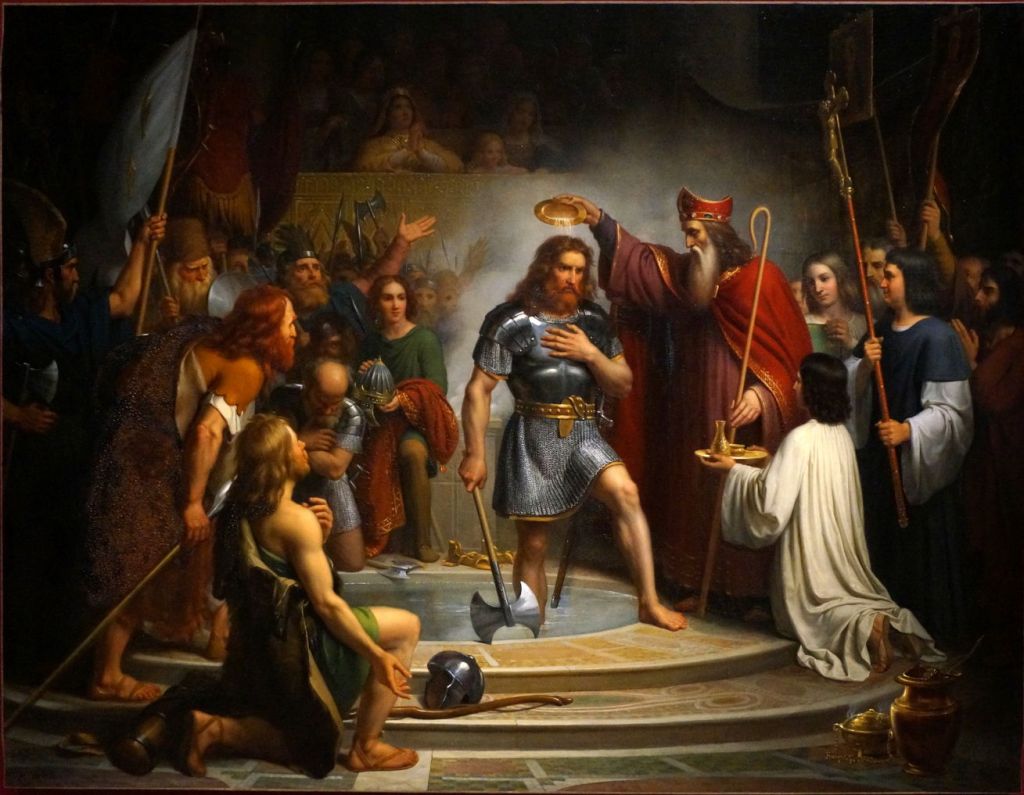 François-Louis Dejuinne (1786–1844), The Baptism of Clovis (date not known), further details not known. Image by G.Garitan, via Wikimedia Commons.

The remains of the Roman Empire collapsed across Europe during the fifth century, leaving the continent divided between many different warring tribes, and vulnerable to invasion by those like the Huns, under the infamous Attila. Thus came the period for which its history is no more than a patchy collection of legends: the Dark Ages.

In 451 CE, the last major military operation of the Western Roman Empire saw the Roman general Flavius Aetius, with the support of Visigoths and other local tribes, defeat the Huns near Châlons, in northern France between modern Paris and Metz. Among the coalition of locals claimed to have supported the Romans there are the Franks, under the legendary king Merovech, thought to have lived between about 411-458, who gave his name to a new dynasty of rulers: the Merovingians.

Next in succession was Childeric I (c 437-481), who ruled the north of France and Belgium from Tournai, in modern Belgium. But it was his son King Clovis I who put the Merovingian rulers in charge of a proper country, the kingdom of Francia, the ancestor of modern France.

Clovis was born in Tournai in about 466, and succeeded Childeric in 481 when he was only fifteen, at which time he had still not converted to Christianity. His court had partially converted, but to Arian Christianity which had been declared heretical back in 325. It was only when Clovis married Clotilde, a princess of the Burgundian kingdom, that he was exposed to Catholicism.

In 486, when he was just twenty, Clovis defeated the Romans at the Battle of Soissons, and in 491 defeated the Thuringians to the east. He forged an alliance with the Ostrogoths in the south by marrying his sister Audofleda to their king, Theoderic the Great. His turning point came in the Battle of Tolbiac, fought against the Alamanni of eastern Germany at some time between 496 and 508, and on Christmas Day in 508 he finally converted to Catholicism in a small church near modern Reims, being baptised there by Saint Remigius.

Joseph Blanc painted this grand romantic view of The Battle of Tolbiac in about 1881, for the Panthéon in Paris. In the detail below, the figure of Clovis, riding a white charger, looks up to heaven for help from the angels, although at the time he was still ‘pagan’.

Ary Scheffer’s Battle of Tolbiac 496 from 1836 was destined for even more prestigious surroundings in the royal Château of Versailles, and puts Clovis at its centre too.

It was perhaps Évariste Vital Luminais who best captured the brutality of fighting at the time, in his undated Rout of the Germans, After the Battle of Tolbiac, although it isn’t clear why there is a nude woman in the centre of the painting. Perhaps she was part of another legend surrounding Clovis.

In about 1500, the ‘Master of Saint Giles’ painted this magnificent scene of The Baptism of Clovis, in which the king stands in the font, lookingly decidedly severe, as Saint Remigius pours holy water over his head. Behind him is his queen Clotilde, who seems to have had great influence over his actions. Outside the church, wearing a red cloak, is what appears to be the descendant of a Roman lictor.

François-Louis Dejuinne’s painting of this event, probably made during the early nineteenth century, The Baptism of Clovis, puts the king in his Sunday best armour, a highly-polished axe in hand, with warriors and court on the left, clerics at the right, and Clotilde and his family well behind him.

At the time of Clovis’ death in 511, his kingdom comprised most of modern France, from the Pyrenees north into the Netherlands, and substantial territory even to the east of the River Rhine. It was only in the far south and east that the Kingdom of the Burgundians and Ostrogoths still held sway.

The legacy of Clovis I was a united kingdom which covered rather more than the modern country of France, with Catholicism as its primary faith, its capital in Paris, and a codified Roman Law, now known as the Salian Frank Law.

Dejuinne’s portrait of Clovis I King of the Franks (1837), for the collection in the Château of Versailles, tells his story in symbols: the fleur-de-lys of the French nation, a small cross on his shoulder, and his left hand resting on his sword.

In about 1811, Antoine-Jean Gros made an initial sketch of the painting which had been commissioned for the cupola of the Dome of the Panthéon in Paris, showing Clovis and Clotilde as one of four royal couples.

Gros seems to have discontinued this larger version of Clovis and Clotilde later that year, when that composition was replaced by an alternative showing the apotheosis of Saint Genevieve.

This unity under Clovis was transient, though: with four sons surviving him, the single state disunited into the separate kingdoms of Rheims (with Limoges and Clermont), Orléans, Paris, and Soissons (with Toulouse). Those sons took to murdering their own families as they battled for supremacy and territory, which was to continue until the end of the Merovingian dynasty in 751.

Lawrence Alma-Tadema’s painting of The Education of the Children of Clovis (School of Vengeance, Training of Clotilde’s Sons) (1861) reveals why these four boys pursued careers of fighting: here, when still knee-high to a grasshopper, they practise throwing small axes at targets.

Even earlier in his career, Alma-Tadema painted the extraordinary sight of Queen Clotilde at the Tomb of her Grandchildren (1858), after her son Clothar had two of them killed when their father Chlodomer died in the Battle of Vézeronce in 524. Her third grandson only survived by escaping into a monastery.

Clothilde was one of a succession of influential and sometimes saintly women among the dynasty, which also include Saint Radegund, who founded a monastery at Poitiers, and Brunhilda, who was an inspiration for Brünnhilde in The Ring of the Niebelung, and in legend was executed by being rent asunder by four horses.