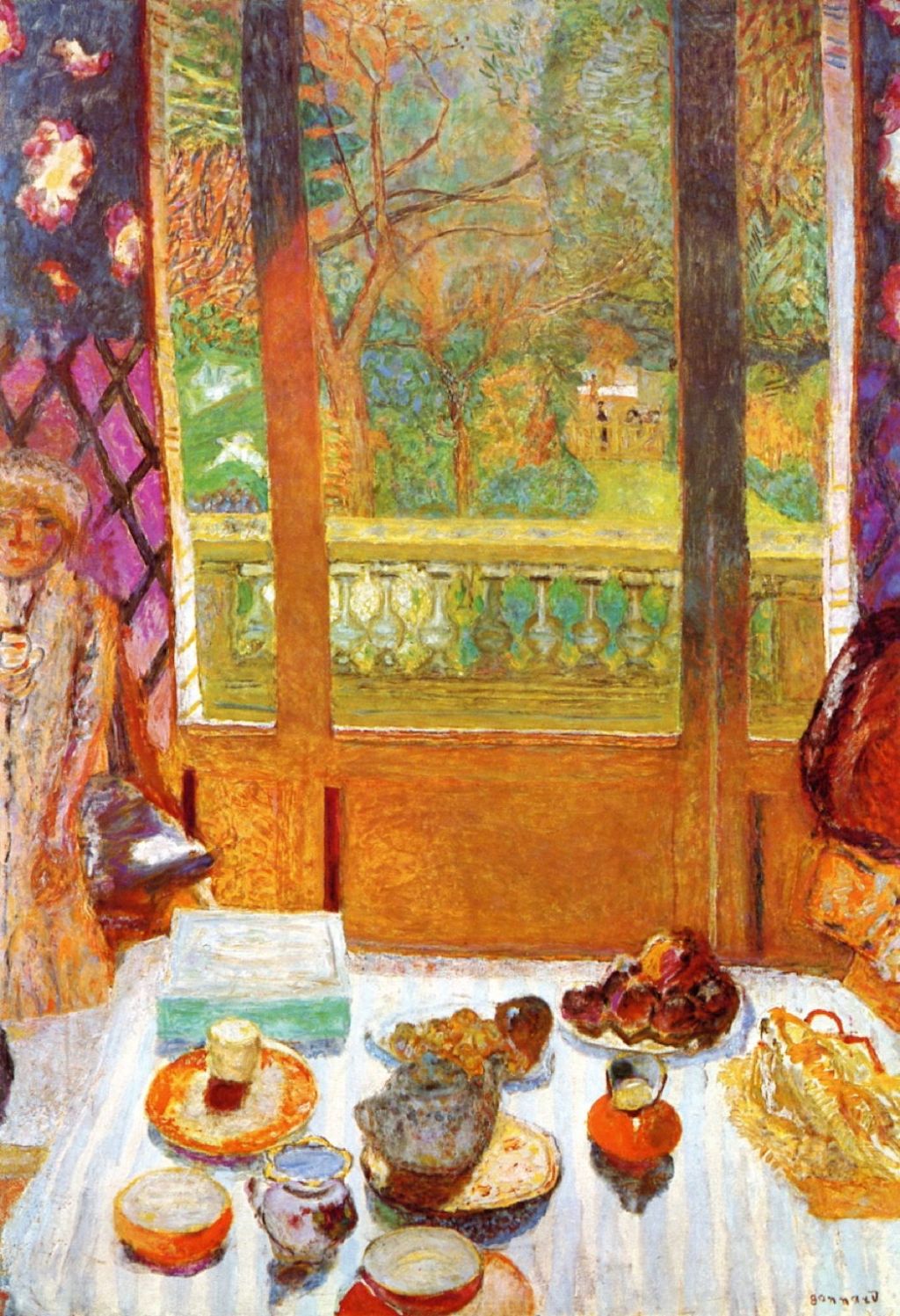 My final selection of paintings by Pierre Bonnard looks at one of his most interesting pictorial devices: the landscape view through French or other windows.

Bonnard developed a taste for views from high points in his cityscapes of Paris during the last years of the nineteenth century. Many of his paintings from that time adopt a high viewpoint from the second or third floor, and look down on bustling people, carriages, and pets in the street. But as far as I can see, he didn’t include the frame of the window in those views.

The first sign of him framing a view in this way is in an unusual painting of this Street Scene (The Auteuil Viaduct) made in this town to the west of Paris in about 1910. Two arches of a railway viaduct are superimposed to give the effect of an ogive window, beyond which are more rectangular and wedge forms, including the projected lettering GARAGE.

That same year, he painted the one and only cityscape that I can find which includes the frame of a window, Through the Panes (1910).

The next use of this device is in his Open Window toward the Seine (Vernon) from 1911-12. The open windows now frame a complete landscape, with the river, trees, and sky above. There is also another thin vertical segment through the open door at the right edge, in which there is the sliver of a figure.

Bonnard doesn’t appear to have used this again until it provided the rich landscape backdrop to his Teatime of 1917.

The following year, Bonnard painted this vibrantly-coloured Landscape through a Window (c 1918).

The frame and surrounds are still more prominent in his Window in Uriage from 1918.

The Open Window from 1921 develops this further as a picture within a picture. The dark shadow of the blind, the window and curtain behind, and the striped wallpaper below form a strong frame for that view of trees. Bonnard has also just cropped in a pot of flowers, black cat, and a woman – perhaps the blonde Renée Monchaty – in the lowest few centimetres.

When Bonnard returned to his family home in north-eastern France in 1923, probably for the funeral of his sister, he painted In Front of the Window at Le Grand-Lemps with its lighter and simpler framing.

La Fenêtre (The Window) (1925) gave Bonnard the opportunity to frame the view from his villa in Le Cannet looking inland, and to add the visual reference to the book which he had illustrated back in about 1897, using Marthe as his model.

The ‘French window’ doors leading out onto the balcony of Bonnard’s villa in Le Cannet formed an excellent frame for The French Windows with Dog (1927), with its fragmented glimpses of the town below.

The best-developed of these paintings is The Breakfast Room (Dining Room Overlooking the Garden) from 1930-31. This combines the still life of the laid table in the foreground, the powerful vertical framing of French windows, and the rich terrace landscape beyond. Ghostly repoussoir is provided by thin slivers of figures at the edges of his canvas. This reverses the traditional compositional device of repoussoir in which the figures would be central and the landscape would perform the framing.

In The Open Door (c 1937), Bonnard reorders those previous views over tables, through windows, and out into the landscape. Here we look out through the frame of French windows, to a table which has escaped into the landscape, and dazzles against the brilliant blossom beyond.

The Studio at Le Cannet, with Mimosa (1938-46) is one of his last and most effective uses of a window, here the large one which lit his studio at Le Cannet. And look down in the bottom left corner, where there is the head and one shoulder of a ghostly figure. Who is there? Could it be Marthe?

I hope that you have enjoyed these small selections of paintings by Pierre Bonnard, and can understand why I think that he is one of the greatest painters of the twentieth century.