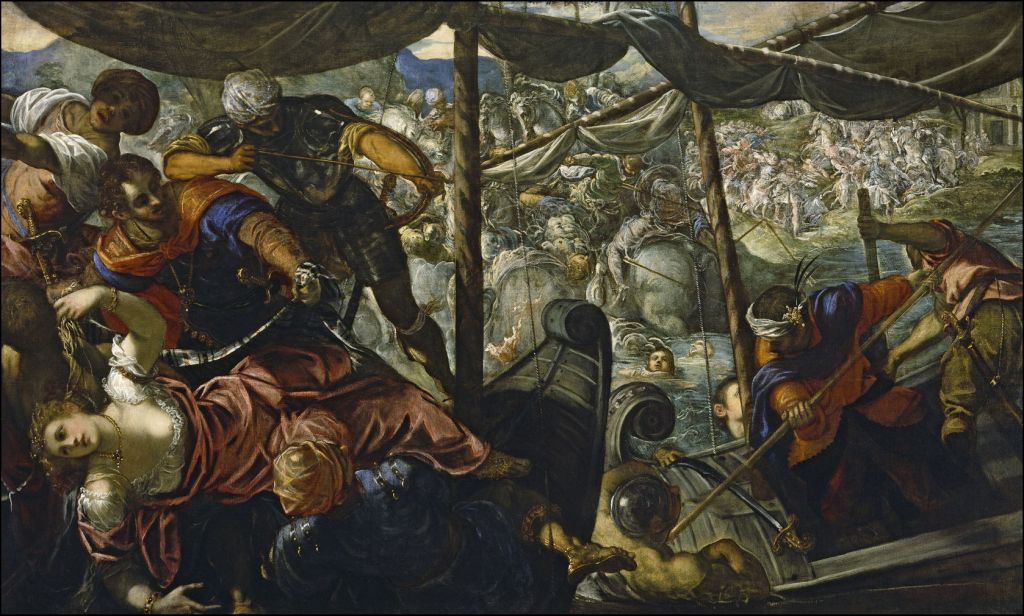 Having whet your appetite with a glimpse of the smallest two of the paintings which Jacopo Tintoretto made for the walls of the Sala superiore in the Scuola Grande di San Rocco, this article looks at another five which are believed to have been largely the Master’s own work.

At this time, the ceiling of the Sala superiore has a series of key stories from the Old Testament. In the Albergo, there are three of the salient scenes from the Passion, and Christ’s crucifixion itself. The walls of the Sala superiore therefore link these by showing the life of Christ up to the Passion, and his ascension. Each canvas is large, more than five metres high and four and a half across (17 x 15 feet approx.), was painted between 1578-81, and being mounted on the walls would have been gazed at intently.

The Adoration of the Shepherds (E&I 225) starts the series in a successfully inventive composition, in which Tintoretto takes the conventional (even a little hackneyed) scene of the nativity and adds a second story. Within this, his references remain traditional: downstairs is an ox and an ass, a cockerel, even a peacock. The Holy family are naturally upstairs, where the infant Christ really does look like a tiny, newborn infant. At the very top, peering through the tumbledown roof, are angels.

It has also been suggested that the ladder at the foot and the beams of the roof are visual links to the crucifixion.

The Baptism of Christ (E&I 226) is a dramatic take on the moment of Christ’s baptism by John the Baptist in the River Jordan, under a powerful sky linking it with the Old Testament scenes. Tintoretto sees this not as the small, almost intimate process seen in many other depictions, but part of a mass baptism, with groups lining the bank ready to join Christ.

Two figures in the foreground are highlighted: a woman whose head is seen in profile, and a man at the right edge. I don’t know if either has been identified.

The Agony in the Garden (E&I 228) shows the nocturnal scene between the end of the Last Supper and Christ’s betrayal, when he was in the Garden of Gethsemane, in the company of three of his apostles. It links closely with the account in the gospel of Matthew, in which the crucifixion is symbolised as drinking from a cup, which an angel is offering to Jesus here. Below that, the three apostles are asleep, and the whole scene is lit in chiaroscuro by the glowing mandorla at the upper right.

Although Jacopo was probably less involved in the painting of this Last Supper (E&I 229) than the works above, it was clearly developed along the lines of his series of Last Suppers, and is similarly relaxed and informal. Its cast includes his usual dog and servants, but there is no sign of any young boy climbing the steps on this occasion. The setting appears distinctly Venetian, and Christ is identified as sitting at the far end of the table, to the left.

The Temptation of Christ (E&I 234) shows the earlier episode in Christ’s life, following his baptism, in which he fasted for forty days and nights in the desert of Judea. He is shown under a makeshift wooden shelter, conversing with “the tempter”, who is tempting him to turn rocks into bread to relieve his hunger.

In addition to these are:

The secular work showing The Rape of Helen (1580) is an outstanding depiction of the abduction of the wife of Menelaus, King of Sparta, by Paris, sparking off the Trojan War. Tintoretto brings forward the start of the war to this moment long before the thousand Greek ships set sail. As an archer is about to shoot his arrow, and another Trojan fends off attackers with a pike, Helen, dressed in her finery, is manhandled onto Paris’s ship like a stolen statue.

The history paintings making up the Gonzaga Cycle were painted almost entirely by Tintoretto’s workshop for the family which ruled Mantua, in northern Italy, from 1328-1708, to decorate their Ducal palace.

Painted on a suitably grand scale, they show heights of achievement of the past, here Federico II Taking Parma (E&I 240) (1579-80). They are now in the Alte Pinakothek, in Maxvorstadt, Germany.

At about the same time, the workshop was producing a smaller cycle of history paintings for the Palazzo Ducale in Venice, of which The Triumph of Doge Nicolò da Ponte (E&I 244) (c 1579) is a good example, and seems to have enjoyed rather greater input from Jacopo.

The last painting I show in this article takes Jacopo’s career up to about 1580, and his return to more religious works.

Christ in the House of Mary and Martha (E&I 252) (c 1580) reminds me of his early Supper at Emmaus from about 1542. It refers to the account in the gospel of Luke of Christ’s visit to the house of Lazarus, Martha and Mary of Bethany (who has been confused with Mary Magdalene in some traditions). While Mary was happy to sit “at the Lord’s feet” and listen to his teaching, Martha was too preoccupied with her duties as hostess.

Tintoretto places this in a thoroughly domestic setting, with Martha seemingly remonstrating with Mary over her lack of involvement in domestic duties. The view through the window reveals a small group of people, who appear to be engaged in some sort of ceremony.

In the next article, I will look at Tintoretto’s paintings for the Sala Terrena in the Scuola Grande di San Rocco, which were probably completed in 1582-83.