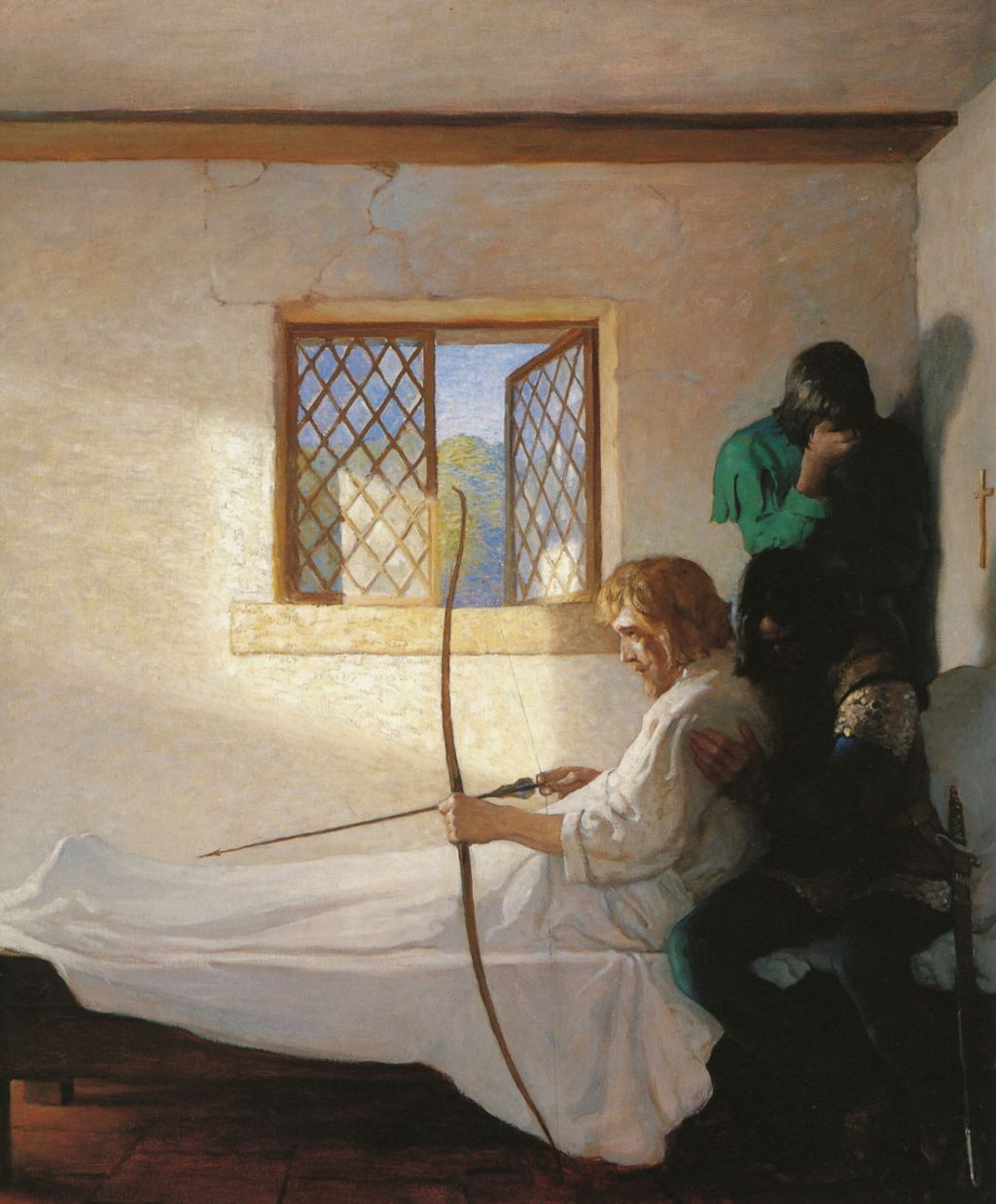 Last weekend, I looked at the use of fables as the basis for narrative painting, and in doing so mentioned legends. Although there is considerable overlap between these two categories of story, and myths and fairy tales, in general a legend is a semi-factual or fictional story about a named and famed figure of the vague past.

There are many legends which have provided the narrative to paintings. For a change, I have chosen two of the best-known British legends which haven’t been formalised in well-known literary works: Robin Hood, and Lady Godiva.

The most popular British legends, even today, remain those of King Arthur, Camelot, and the Knights of the Round Table. They are also among the most complex legends, with multiple literary versions, some degree of absorption into non-English accounts, and a vast literature. I will perhaps return to them on another occasion.

Lady Godiva, which I cover in the next article, is a good example of a short and simple legend with a strongly visual story – she rode naked through the streets of Coventry – which was both highly attractive to the painter, but a tricky motif until the late nineteenth century.

The tales of Robin Hood are claimed to date back to around 1200, with the hero dying, by popular account, in 1247. Earliest surviving written accounts are from around 1500, in the form of a series of lengthy ballads which were first printed in Antwerp, and by Wynkyn de Worde in London.

They centre on Robert of Locksley, who lived on the edge of Sherwood Forest near Nottingham, England, and was dispossessed of his farm and made an outlaw. Under his nickname of Robin Hood, he assembled a group of friends who became known as his Merry Men, who lived in the forest preying on the many ‘bad’ and despotic landowners and nobles, for the benefit of the oppressed poor. His trademark skills were woodcraft and supreme accuracy with the longbow. Among the friends he defended against attack was Maid Marian, whom he married.

Robin Hood has been the subject of many illustrated books from 1500 onwards, although I will show only a small selection of more ‘artistic’ illustrations here. He has featured in at least thirty movies, been played by Errol Flynn (1938) and by Sean Connery with Audrey Hepburn (1976), and several television series.

Robin Hood doesn’t appear to have featured in any fine art painting until the nineteenth century. However, some of the illustrations made for printed editions of his tales have interesting pedigrees. This coloured engraving of Robin Hood & Clorinda was made in 1783 from an original by John Meheux, by the relatively young William Blake, when he was working primarily as an engraver.

The earliest paintings related to the legend of Robin Hood originate in a partial retelling of some of his legends in Sir Walter Scott’s romantic mediaeval novel Ivanhoe, first published in English in 1820, and in French translation soon afterwards. Ivanhoe is a swashbuckling story of one of the remaining Saxon noble families in the predominantly Norman court of 1194, after the failure of the Third Crusade. Sir Wilfred of Ivanhoe, the hero, is opposed by Sir Brian de Bois-Guilbert, one of the Norman Knights Templar. Isaac of York is a Jewish moneylender with a beautiful daughter, Rebecca.

At the siege of Torquilstone Castle by the Black Knight (King Richard), Robin of Locksley (Robin Hood), and their Saxon forces, Rebecca is abducted by Brian de Bois-Guilbert. Meanwhile Ulrica, an old Saxon woman, sets fire to the castle, and revels in her vengeance on top of its tower.

The Abduction of Rebecca by a Knight Templar is Léon Cogniet’s account of one of the more enthralling scenes. It was exhibited in the Salon in 1831. It shows Brian de Bois-Guilbert, Rebecca, and Bois-Guilbert’s Saracen slave in the foreground. As their horses gallop away, the castle behind them is consumed by fire, with Ulrica’s figure seen on the top of the tallest tower.

In 1846 Eugène Delacroix turned this same scene from Ivanhoe into one of his greatest paintings.

Eugène Delacroix’s The Abduction of Rebecca was shown at the Salon of 1846 under the extended title of Rebecca Abducted at the Order of the Templar Bois-Guilbert during the Sack of the Castle of Front-de-Boeuf, but did not get a good critical reception. In 1858, Delacroix attempted an entirely different composition, which was shown in his final Salon the following year, and is now in the Louvre.

Other artists stuck to the simpler accounts in the ballads of Robin Hood.

‘Good’ King Richard, to whom Robin Hood was loyal, sits drinking under an oak tree at the right, still wearing his armour from the Crusades, the only link between these legends and the ‘Saracens’ of the Middle East. Various of the ‘Merry Men’ and Maid Marian can be spotted in the crowd: at the left, with a deer over his shoulder is Little John, sat under the same chestnut tree is Friar Tuck, and Robin Hood stands in the centre, in red, with Maid Marian to the right.

George Cattermole was an artist and illustrator who moved in literary circles, and was a friend of Charles Dickens. His Interior (Tales from Robin Hood, Featuring Friar Tuck) from about 1850 shows, from the left, Friar Tuck, Robin Hood, and Little John in a strangely inappropriate indoor scene.

A couple of years later, during his long confinement in London’s Bethlem psychiatric hospital and asylum (‘Bedlam’), Richard Dadd painted this watercolour Sketch of Robin Hood (1852). The two figures are probably identical because of Dadd’s limited supply of suitable models, but the image of the longbow-wielding woodsman conforms to the stereotype.

Walter Crane, one of the most artistic British illustrators of the century, painted Robin Hood and Guy of Gisborne Fighting for a 1912 illustrated edition of Robin Hood and the Men of the Greenwood by Henry Gilbert. For once, Robin Hood has dropped his longbow to fight the villain with his sword. Both men bear horns at their sides, which Robin used to summon his Merry Men.

Louis Rhead was another prolific illustrator of these tales. This fine engraving of Robin Hood and Maid Marian in the Bower appeared in his 1912 edition of Robin Hood, and is rich with the visual associations made with the legends.

One of my favourite paintings of these legends was made by Newell Convers ‘NC’ Wyeth, the father of the even greater Andrew Wyeth, another prolific illustrator, and an under-rated painter. The Passing of Robin Hood was made for the epilogue of a 1917 edition of Robin Hood by Paul Creswick, and published in Philadelphia, PA.

It shows the last moments of the hero. In his old age, Robin Hood underwent blood-letting sessions at the Abbey of Kirklees, where his aunt had recently become the abbess. She gave him drugged wine, and left him to exsanguinate and die. But before he succumbed, he regained consciousness sufficient to loose one last arrow through the window, to mark the spot where he should be buried.

Comforting the dying Robin are Little John (standing) and Hob o’ the Hill.

Ironically, there are probably more paintings of one place on the coast of Yorkshire named after Robin Hood than of his legends.

John Brett, by far the greatest Pre-Raphaelite landscape painter, made this exquisite oil sketch of Robin Hood Bay, Yorkshire in 1890.

Tomorrow we travel further back in time, to an Anglo-Saxon noblewoman’s daring ride through the city of Coventry.