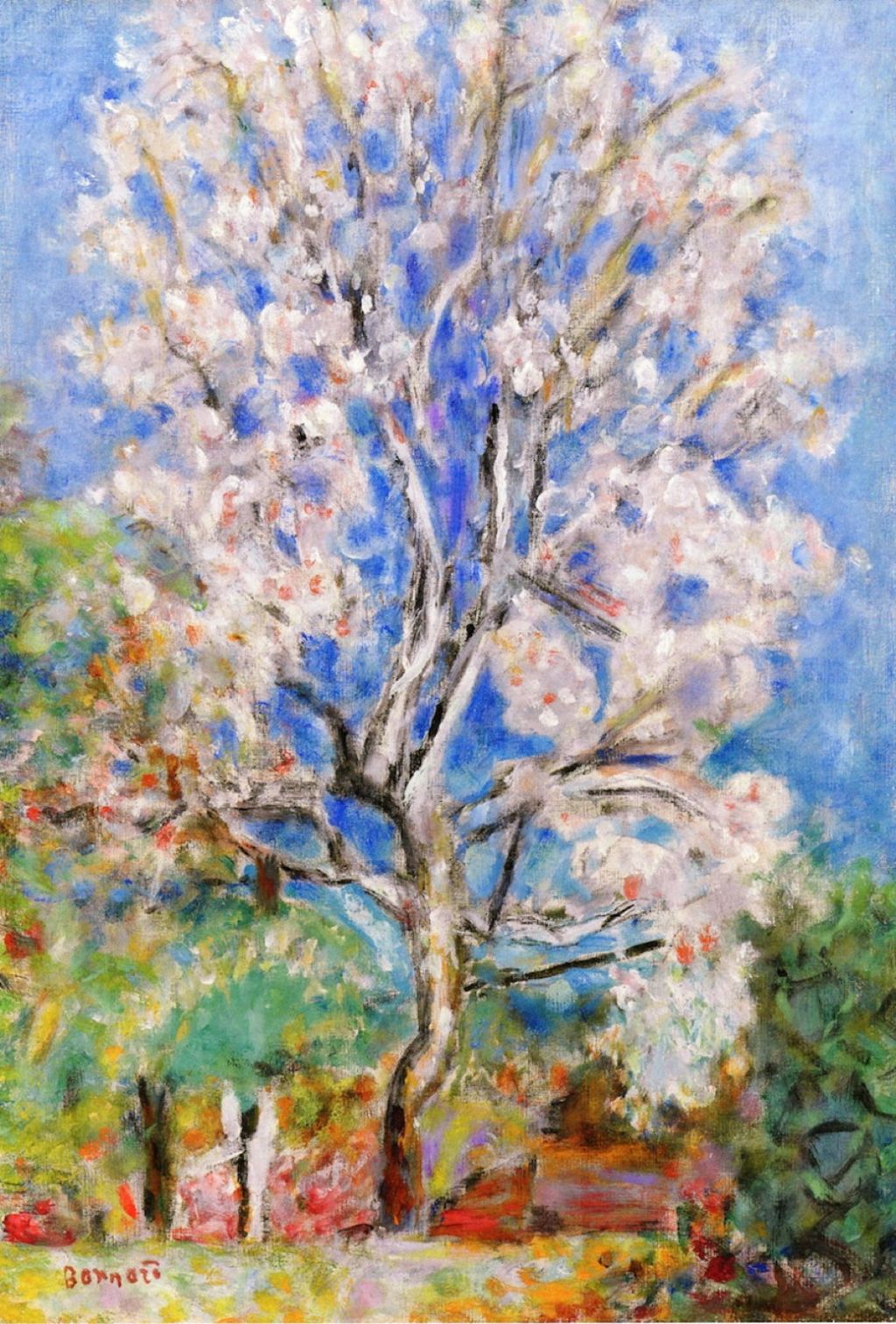 In 1927, Pierre Bonnard spent much of the first half of the year at his villa in Le Cannet, paying visits to Arcachon and Paris. In May, he bought a plot of land adjacent to the villa, in which to extend its garden. He then spent a little while at Uriage-les-Bains at the end of June. In late November, the Bonnards effectively left Paris to live in the Mediterranean climate of Le Cannet.

Bonnard had had considerable work performed on their villa in Le Cannet, which is only just inland of the resort of Cannes, but probably hadn’t expected to find his new balcony there covered with snow. Effect of Snow (Le Cannet Under the Snow) (1927) is an unusual version of his favourite view over the small town.

Although by now he spent less time in the north of France, he continued to paint one of his favourite places there, The Garden at Vernon (c 1927), here seen in a riot of colour and the textures of its vegetation.

Back in the south, the ‘French window’ doors leading out onto his new balcony formed an excellent frame for The French Windows with Dog (1927), with its fragmentary glimpses of the town below.

Indoors, he found an odd dividing wall to separate the figures of two women in The Vestibule (c 1927). Marthe is deeper into the painting, on the right, and the woman with short hair at the left appears to be the Bonnards’ maid.

Bonnard continued to develop his still lifes, almost all of which showed fruit at this time. In Basket of Fruit in the Sun from about 1927, much of his canvas is covered with yellows and orange to strengthen the impression of searing heat.

In April of 1928, Bonnard had his first solo exhibition in the US, at the de Hauke Gallery in New York. During the autumn, Bonnard travelled between Arcachon, Paris, Vernon, and Vichy.

Morning on the Rooftops (1928) is another view from their villa in Le Cannet, I believe, looking out over the red rooves of nearby houses.

Grapes (1928) is one of two almost identical versions of this rather gentle still life. In both he opted for a red background for colour contrast.

Over these years, he seems to have painted fewer nudes. Nude with Radiator from 1928 appears to use Marthe as his model, against the relative novelty and strict geometric rhythm of a radiator.

Bonnard started 1929 in Arcachon, before returning to Le Cannet for much of the rest of the year.

The Road to Nantes is one of Bonnard’s relatively few paintings dated to 1929. It is also one of his most puzzling works, which at first sight looks to have been abandoned, incomplete. However, the grisaille effect in the sky and the large tree at the left could well represent what he saw at the time, on an overcast and grey day.

It is also unclear where this is. Nantes is a city on the west coast of France, at the mouth of the River Loire, closest perhaps to Arcachon, but still some distance from it.

Towards the end of 1930, Bonnard moved to the rented Villa Castellamare in Arcachon, where he worked for almost six months. He complained that Marthe had become completely unsociable, and he had to get away from his isolation in Le Cannet.

View of Le Cannet from about 1930 is one of his loosest views over the town from the Bonnards’ villa Le Bosquet.

This Almond Tree from about 1930 must be one of Bonnard’s finest paintings of trees. It is carefully constructed according to anatomical principles, although it looks quite haphazard and sketchy.

Breakfast (c 1930) shows Marthe hunched over the table, looking much more her age than in Bonnard’s paintings of her nude. By this time, she – like Pierre – had turned sixty.

In about 1930, Bonnard painted a pair of still lifes set against landscapes which support their colour theme. In Fruit, Harmony in the Dark, which was painted in oils, the deep red of the apples matches that of the balcony and landscape beyond.

Its pendant, Fruit, Harmony in the Light (c 1930), apparently painted in gouache and watercolour, sets the yellows and reds of its fruit against an indoor background of similar colours.

My final painting from this period was also made in gouache, and is Bonnard’s Self-Portrait from 1930. He seems rather gaunt, shy, and retiring here, in his mid-sixties.