Over the last few weeks, I have heard of several fine Mac journalists who have recently been hired by Apple. I’m delighted for them, delighted that Apple is hiring some of the best, and hope that they hit the ground running, so that macOS and other Apple products are properly documented again.

I’m hoping that at least one of them will be responsible for the unglamorous but vital task of generating release notes to accompany updates, because last week Apple has exceeded its own unhelpfulness in the Supplemental Update for its newest model, the 2018 MacBook Pro. This starts with the most uninformative download page I have seen for a long time: 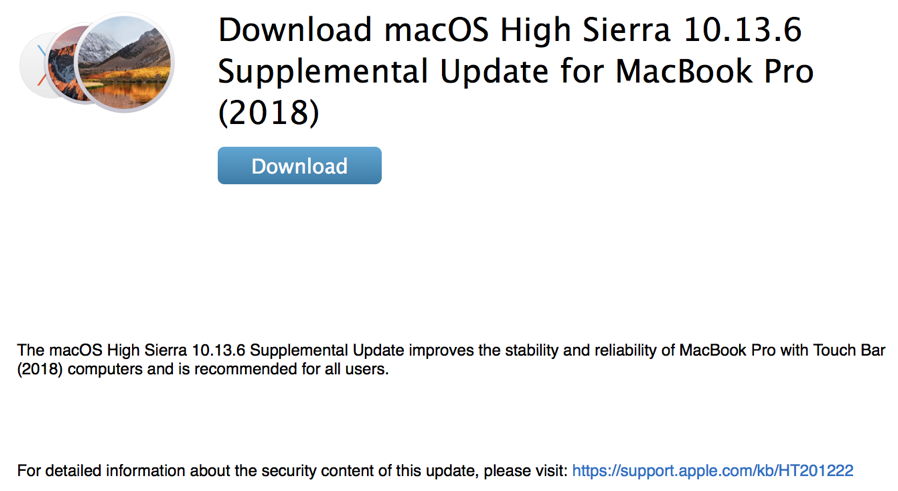 The first sentence is crass in its assumption that anyone would ever provide an update which it didn’t believe would improve “the stability and reliability” of the system being upgraded. There have been many updates which have failed to come up to that expectation, but that has, I’m sure, been unintentional.

Apple fails to give us any inkling of what aspects of “stability and reliability” might be improved, and refers us to “detailed information about the security content of this update” not at the page containing its security release notes, but at Apple’s main list of such notes. Which still has no release notes providing any further information about this Supplemental Update. Nor has Apple distributed any notes to its Security-Announce mail list. If any security release notes exist, Apple has not released them.

If Apple isn’t telling us what is in this Supplemental Update, the only way ahead – other than putting together several different stories which have been leaked out to some members of the press – is to look inside the installer package, as usual with the help of Suspicious Package.

The first thing that’s striking is that one reason for the size of this update (just over 1.3 GB) is that it contains EFI firmware upgrades for every other model of Mac. Except, as far as I can see, for the only models which it is supposed to update, the MacBookPro15,1 and 15,2, whose EFI firmware doesn’t appear in the list. That could perhaps be because Apple’s new T2-equipped models use a different update mechanism, something we’ll just have to work out for ourselves. 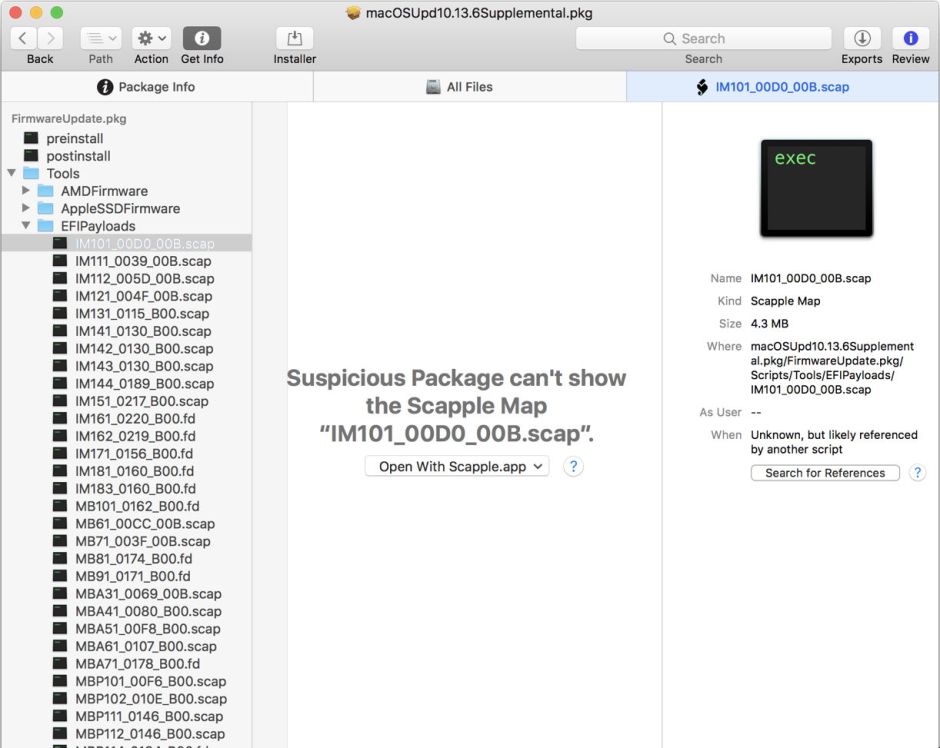 It gets even stranger when you look through that list of EFI firmware versions, because several are one version older than those which were installed with the update to High Sierra 10.13.6 released on 9 July, a few days before this MacBook Pro model. If those firmware versions are anything to go by, whoever built this installer did so before Apple finalised 10.13.6, and made the assumption that it would be run on all Macs capable of running High Sierra, not just the 2018 MacBook Pro.

Only many of the files in the installer package are dated 21 July, almost two weeks after 10.13.6 shipped. Perhaps time travel was involved? 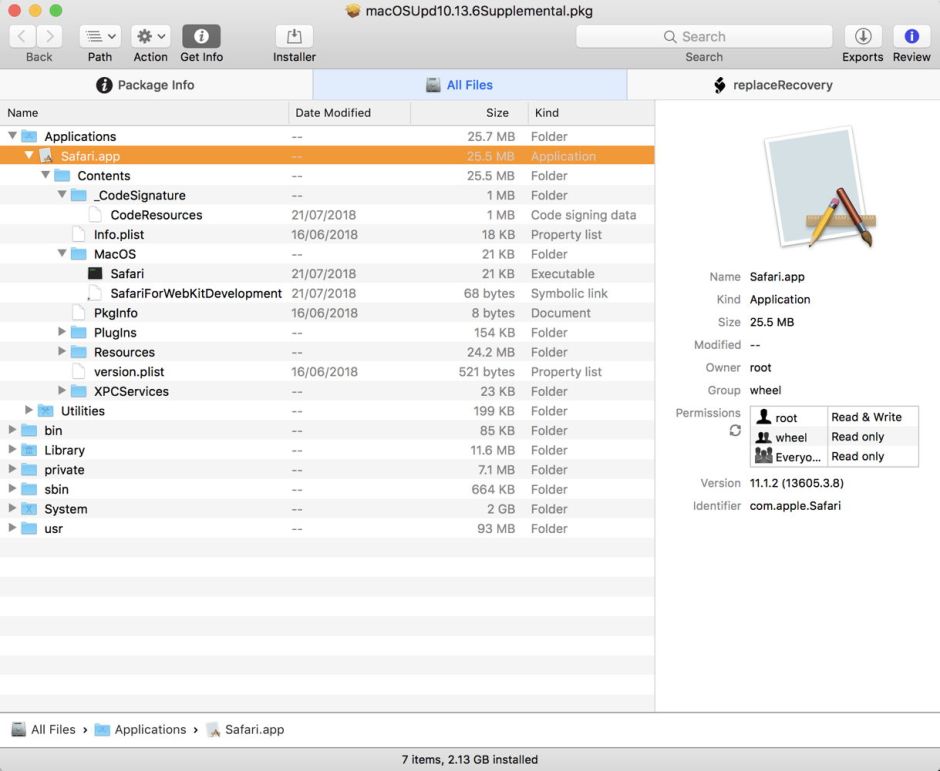 Looking through the rest of the installer’s payload, it doesn’t appear to be a particularly extensive update. But there is an apparently fresh Safari app, sticking out as one of the few user-facing components included in the update. Only its version number – 11.1.2 (13805.3.8) – is identical to that which shipped with the 10.13.6 update. 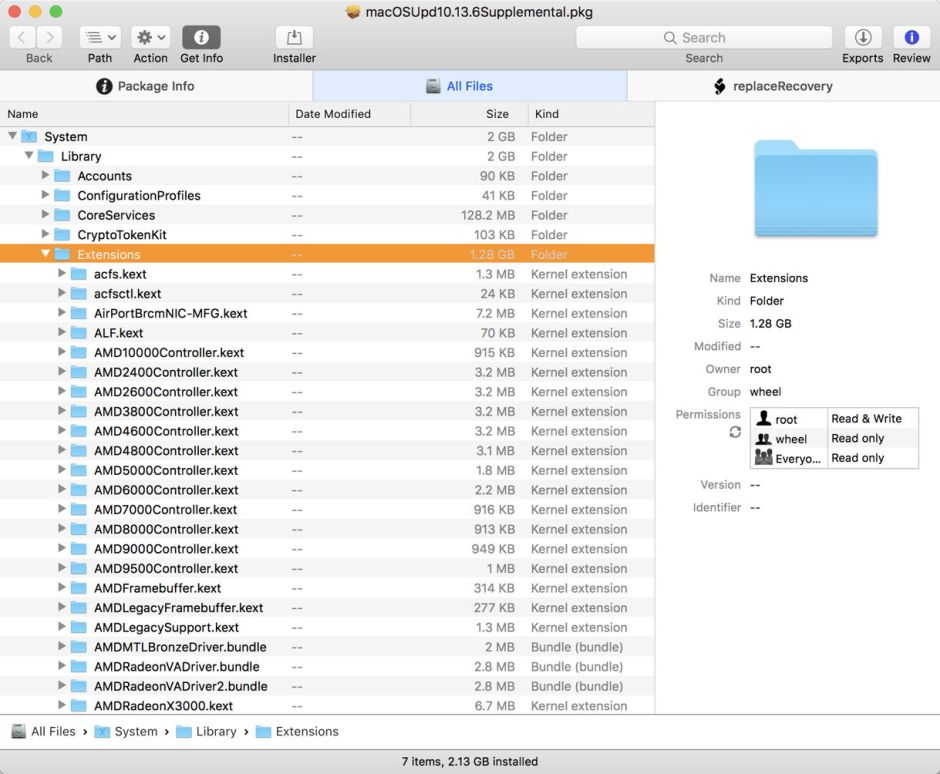 If a lot of the installer is made up of useless EFI firmware updates for Macs which can’t install this Supplemental Update, most of the rest of it is composed of yet another complete set of Apple’s kernel extensions (KEXTs). As with most other High Sierra updates, for some reason Apple’s engineers have found it necessary to include the entire /System/Library/Extensions folder, lock, stock and barrel.

I haven’t had the patience to plod through each of those extensions to check which have changed in this Supplemental Update, but the results of one test may cast some light. Using the command tool cmp to compare binary files, the APFS kext binary changed substantially from 10.13.5 to 10.13.6 and again in this update, although its version number (748.51.0) has not changed at all.

If Apple had set out to deliberately obfuscate what it has changed in this update, I doubt that it could have done a more thorough job. We’re left guessing why all those spurious EFI firmware updates were included, and what has changed in the rest.

Let’s just hope that those new members of Apple’s staff will be allowed to enlighten us as to what on earth is going on with these updates. If not, could Apple just hire us a good detective, please?

Finally, I note that this is the sixth out-of-cycle update to High Sierra. Is this a record for macOS?