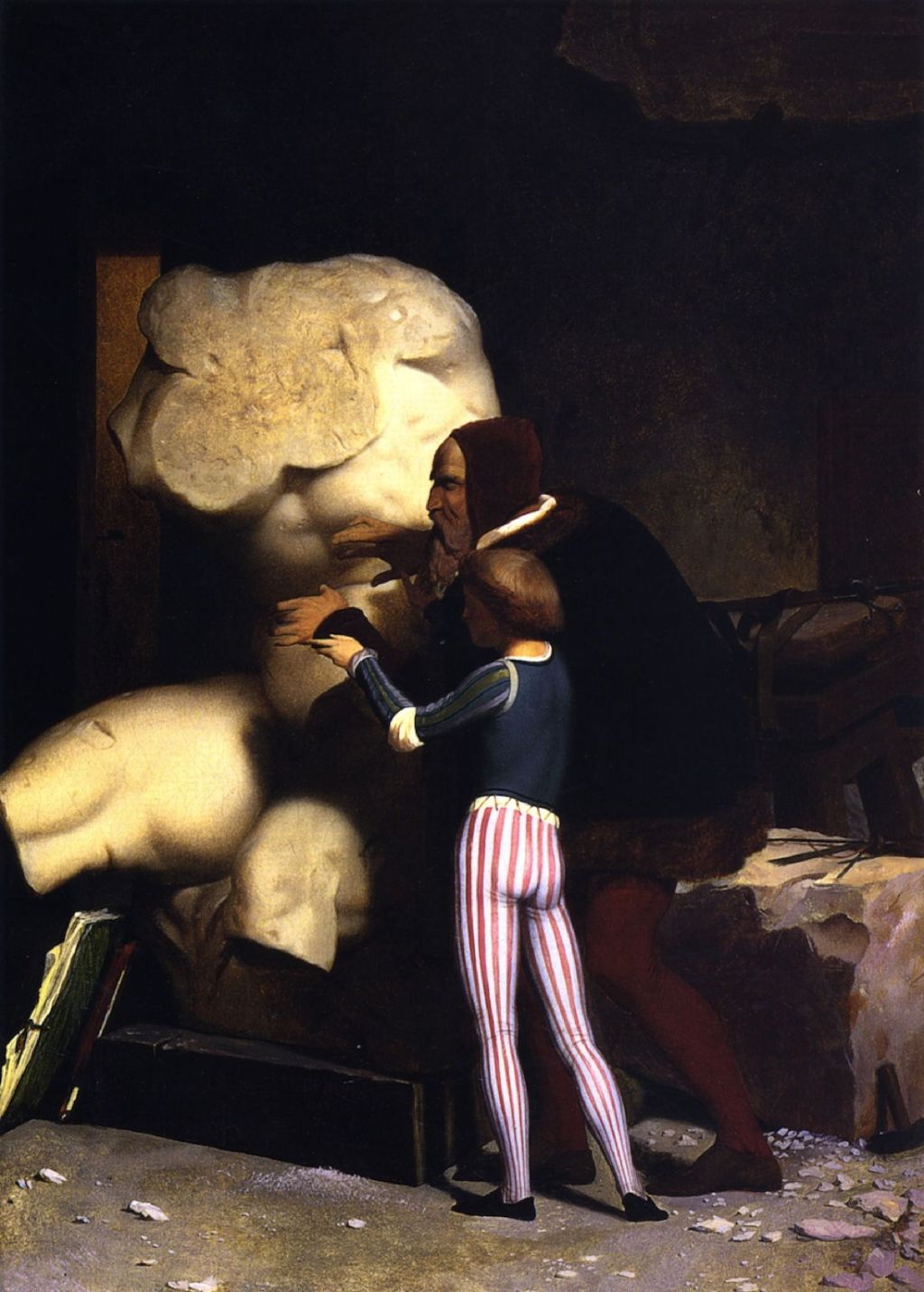 If one of the aims of studying history is to gain an understanding of the past, art history has failed miserably to accomplish that for the late nineteenth century. Whether viewed in the Salon, the commercial gallery, or the teaching studios of the École des Beaux-Arts, the dominant French painter for much of that period was Jean-Léon Gérôme (1824–1904).

Gérôme was also one of the most vociferous opponents of the Impressionists, and by the end the century had fallen into disfavour. But learning history without getting to grips with both sides is a bit like ignoring King Harold in an account of the Norman Conquest of Britain, or omitting the Confederates from the American Civil War.

Each time that I look at one of Gérôme’s narrative paintings, I see something new, a reading that I had not noticed before. Whenever I browse his works, I see another painting which fills me with curiosity. It’s true that many are sheer spectacle, but behind their popular appeal there’s often much more.

In this series, I’m primarily going to look at his narrative paintings, and to suggest some readings which I think do them justice. As his career spanned times of momentous change in France, and Gérôme often moved in high places, I will attempt to explain what was going on around him, when relevant to his paintings.

Gérôme’s first painting to be shown at the Salon, in 1847, was made during a time of increasing tension as the ‘July Monarchy’ neared collapse. The following year, France underwent revolutions, leading to Napoleon III’s coup in December 1851, and the Second Empire. During this, much of the city of Paris was razed to the ground, and rebuilt according to the grand designs of Baron Haussmann. But it too ended in disaster, when France’s crushing defeat in the Franco-Prussian War of 1870-71 brought the Third Republic with its extensive social change and modernisation. Gérôme died in his studio just a decade before the start of the First World War.

Gérôme trained in the studio of Paul Delaroche, a great history painter, and for about three months with Charles Gleyre, who later taught Whistler, Monet, Renoir, Sisley, and Frederic Bazille. He joined a group of artists known as the ‘Néo-Grecs’ (Neo-Greeks), who favoured light and witty scenes from the classics, and rejected the serious and sober approach of neoclassicism. His first bid for fame failed, when his entries in the Prix de Rome in 1846 found no favour with its judges. He then painted his first significant work, The Cock Fight (1846), which was exhibited at the Salon of 1847.

This motif had started from a relief showing two adolescent boys facing off against one another. Gérôme felt that he needed to improve his figurative painting, and after Delaroche’s advice decided to develop that image by replacing one of the boys with a girl. In both Greek and English – but not French – the word cock is used for both the male genitals and a male chicken, and the youthful Gérôme must have found this combined visual and verbal pun witty and very Néo-Grec.

There is a curious ambivalence in its reading too: two cocks are fighting in front of the young couple. Is one of the birds owned by the girl, and if so, is it the dark one on the left, which appears to be getting the better of the bird being held by the boy? Either way, it is a lightly entertaining reflection on courtship and gender roles, and a fine debut.

The Cock Fight earned Gérôme a third-class medal, and he sold the painting for a thousand francs. With the benefit of favourable reviews from critics, the following year brought him lucrative commissions, and a growing reputation.

Gérôme followed that with Anacreon, Bacchus, and Amor in 1848. This harks back to the secret rites of Bacchantes, invoking Anacreon, one of the nine canonical Greek lyric poets – very Néo-Grec again. The poet takes centre stage with his lyre at his shoulder. Dancing at his feet are an infant Bacchus at the left, waving his thyrsus and looking to the left at a young woman playing the double pipes. To the right of Anacreon is Cupid (Amor), with his wings, bow, and quiver of arrows. Behind is a procession of men and women, and in the left distance they are dancing in a large circle.

This painting was exhibited in the Salon that year, from where it was purchased by the state for 1,800 francs. I can’t help but think that it must have been a suitable piece of escapism from the political tensions of the February Revolution which took place that year, leading to the Second Republic.

In 1848, the short-lived Second Republic ran a competition for a painting which would form its figure(head). Gérôme entered The Republic in that, but was unsuccessful. This is his improved entry for the second round, which is not too distant from the figure later used for the Statue of Liberty.

Of all these early works, it is Gérôme’s relatively small and simple painting of Michelangelo from 1849 which is the most enigmatic. Michelangelo is shown in his dotage, hunched over and blind, being led by a young boy whose dress would have aroused his master’s homoerotic desires.

The broken sculpture is the Belvedere Torso, a huge fragment of marble statuary which was so loved by the sculptor that it was nicknamed the School of Michelangelo. The young boy is leading his master’s hands to stroke and caress the marble, now that he was unable to enjoy looking at its classical – and very male – form.

This is perhaps the first sign of Gérôme’s developing theme of sight, and the role of vision in establishing truth. In his blindness, Michelangelo can only feel what we can see, and cannot see the figure of the young boy. This is particularly appropriate to Gérôme, who quite late in his career became a successful sculptor himself, and whose later paintings referred to his sculptures and his acts of creating them.

It is also thought highly unlikely that the Torso would have been in Michelangelo’s workshop at the time.

Gérôme met more criticism when he exhibited Grecian Interior, Le Gynécée in the Salon of 1850. One critic (Théophile Gautier) compared it to one of Ingres’ paintings, but it was more widely condemned for its immorality, as you could perhaps understand.

It has been disputed as to whether the scene depicted here is that of Messalina’s legendary brothel, or was inspired by a poem by Simonides of Amorgos considering the temperament of women. Its title states that it shows the women’s area or gynaeceum within a large Greek house, where the unmarried women relaxed and socialised with one another, a refuge to which the ‘woman of the house’ would return when not with her husband.

Despite its four well-lit nude women, there is more to this painting than their expanse of flesh. The woman resting on the couch, looking away from the viewer, appears to be in the early stages of pregnancy. Most of all, though, it is Gérôme’s first classical painting which he has filled with small clusters of apparently random objects – for example, at the right edge, and around the shrine to the left of centre.

Gérôme became almost obsessive in decorating his classical paintings with all sorts of bric-a-brac, like an old curiosity shop. Although he researched these extensively, many are now considered to be inappropriate or anachronistic, and some are just odd. Like the fine detail on the tiled floor, they enhance the impression of reality, giving many of his paintings what would now be termed a photographic quality over eighty years before colour photography became common.

Night (c 1850-55) is a small diversion which appears to have been completed by several different hands. It is typical of later paintings, particularly during the popularity of Aestheticism, of the personification of night.

One problem which Gérôme experienced throughout these early works was integrating his figures into the overall colour and look of the painting. Critics at the time commented on how his figures too often looked as if they had been pasted onto the canvas. This was less true of his Grecian Interior, but becomes quite prominent in this painting, The Idyll, also known as Innocence, or Daphnis and Chloe, from 1852, shown in the Salon of 1853. This is perhaps made worse by this painting’s lack of depth, and Daphnis’ sculptural appearance.

Gérôme’s former teacher Charles Gleyre had exhibited his own version of Daphnis and Chloe, perhaps a year or two earlier; the paintings are entirely different, although both feature the couple unclad.

With Napoleon III installed as the Emperor of France, and Gérôme’s early paintings generally well-received, it was time for the artist to tackle more substantial visual stories.