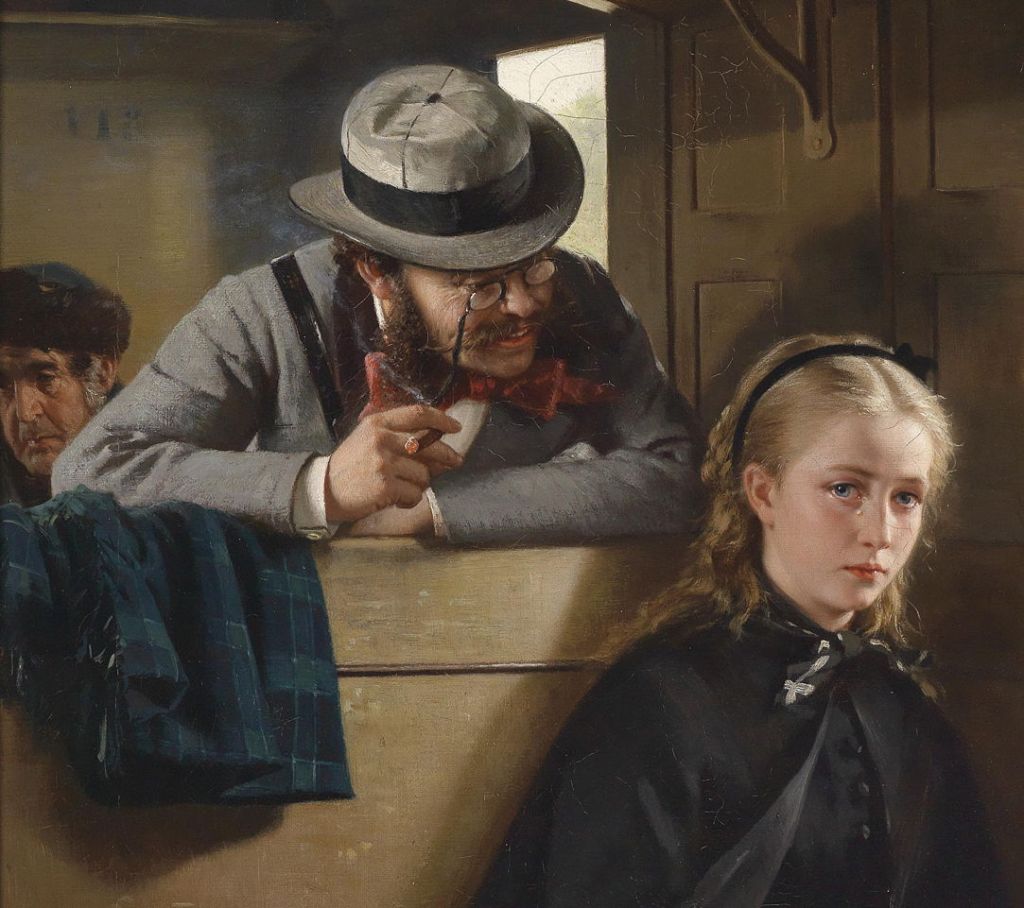 Sometimes my eye is caught by a single painting by an artist I haven’t come across before. This takes me to look at their other work, and not infrequently a welcome surprise. On this occasion, it took me to Berthold Woltze (1829–1896), whose biography is almost as short as they come.

He was born in Havelberg, a town built on an island in the Havel River, in Germany. He became a professor at the Weimar Saxon Grand Ducal Art School, among whose directors have been Arnold Böcklin, Franz von Lenbach, and Albin Egger-Lienz. Many of his paintings of genre scenes were engraved and published in the Gartenlaube (‘the garden arbour’) illustrated weekly newspaper, which was a forerunner of the modern magazine. He also painted portraits.

And that’s all we seem to know about him. I think that there’s more, and looking at his paintings, I think that he may have been an early exponent of what is known in Britain as the ‘problem picture’.

As in other countries in Europe, many Germans migrated to North America during the nineteenth century. A Letter from America from about 1860 shows an elderly mother and father eagerly reading a letter which they have received, presumably from their migrant son, and brother to the young woman, who looks as if she might consider going too.

Woltze’s undated The Letter gives us fewer clues. A young mother has just received, opened, and read a letter. She leans against the massive stone hearth, looking badly crestfallen, as her young daughter holds her arm and looks up at her mother’s face. The mother has been peeling potatoes, which are now scattered on the floor, and in her apron. Her shoes are badly worn, and she is clearly not well off.

The letter’s envelope lies on the floor, at the lower left corner, but gives no further clues. This is clearly bad news, and probably about her husband. Is he wounded, missing, dead, or has he left her?

Reading Good Advice Is Expensive! from 1873 is aided by its title, and some of the clues in the painting. An older man and woman are talking just below a sign which reads Justiz (‘justice’), and looks like the entrance to a court of law. He is quite roughly dressed, and carries on his back a load of papers which are almost certainly legal in nature. This makes him a legal clerk/messenger, either working for lawyers or the court.

The woman wears black over her otherwise brightly-coloured clothing, suggesting that she may be a widow. She is most probably asking the man for legal advice, perhaps in relation to the death or estate of her late husband. His response is likely to be the title of the painting.

The painting which caught my eye is Der lästige Kavalier (1874), rendered into English as The Annoying Bloke, I suggest.

It is set in a railway carriage, where there are two men and a young woman. She is dressed completely in black, and stares towards the viewer with tears in her eyes (detail below). Beside her is a carpet-bag, and opposite is a small wooden box and grey drapes.

Leaning over the back of her seat, and leering at her, is a middle-aged dandy with a brash moustache and mutton-chop whiskers, brandishing a lit cigar. He appears to be trying to chat her up, quite inappropriately, and very much against her wishes. Behind him, and almost cropped off the left edge of the canvas, is an older man with a dour, drawn face.

The young woman has suffered a recent bereavement, and may even be travelling back after the funeral. She looks too young to have just buried a husband, so I think it more likely that she has just lost her last parent, and is now living alone, and prey to the likes of this annoying and abusive bloke.

This sub-genre became very popular in Britain during the late nineteenth century: the problem picture, which encouraged speculation as to its narrative, even to the point of being the subject of columns in and letters to newspapers over the period 1880-1900.

Woltze’s other paintings include run-of-the-mill genre works such as his undated In the Tavern which has no tantalising narrative clues, just a couple of men in extraordinary hats.

Departure, also undated, is, like his letter paintings, a popular and fairly simple story.

Double Portrait (date not known) is more open to speculation, though. Two young women are talking in a garden or park. They may be sisters, or cousins, perhaps. The older has just revealed a secret to the younger, and sits plucking the petals off a daisy flower. The younger looks pleasantly surprised and curious, as if waiting for the older to tell more.

The last painting by Woltze which I have been able to locate (although the quality of the image is not good) is an undated scene showing a Young Gypsy under Arrest, a sadly common sight across Europe at the time. Next to the gypsy woman is a large tambourine, as if she had been engaged in dance or entertainment at the time. A young girl is bringing the woman a plate of food and a large mug of drink, walking fearfully in as if the gypsy were a sleeping ogre. Behind is her father, the jailer, holding open the door.

Having not come across a ‘problembild’ in Prussian painting before, I’m curious: was Woltze unusual, or were there others who painted similar works? Did they too become a popular pursuit in the same way that they did in Britain?