Most of the time, I use popup menus to set options. Their sole action is to select a value which I read in a function, and they don’t need their own custom actions. But in Consolation 3, I have two popup menus which need to trigger the re-conversion of a log extract in JSON format to the displayed attributed string.

I had long handled that by attaching an IBAction to those popup menus: whenever the user selected a menu item there, this triggered
@IBAction func updateAttrText(_ sender: Any) {
if (self.popupStyle.indexOfSelectedItem > 2) && (self.theJSONDictionaries.count > 0) {
let theStyledStr = self.styleLogStr()
self.theResTxt.textStorage?.setAttributedString(theStyledStr)
} }

This checks that the log extract is being held in JSON format (according to the setting in the popupStyle popup menu), and that its JSON dictionaries are available, then generates a new styled attributed string and displays it in theResTxt, within a scrolling text view.

Consolation has been undergoing quite a lot of change in its source recently, but I couldn’t understand what was throwing this previously reliable code. Although this raised an exception each time the popup menus were used, the app carried on working just fine; indeed, there was the slightly sardonic touch that a log browser should keep writing into the log.

As might be expected, I wasted quite a lot of time discovering that any IBAction attached to either of the popup menus in question generated the exception, and that attaching an IBAction in this way is ordinarily perfectly good and should work fine. It was then that it occurred to me that a few days ago, I had added an override to the validateMenuItem function in that ViewController. This was to enable three preference-handling menu items which had somehow been left disabled some time ago.

The last case in its switch was to drop any other validateMenuItem calls through to super.validateMenuItem, which should have handled those popups gracefully. What if it didn’t? 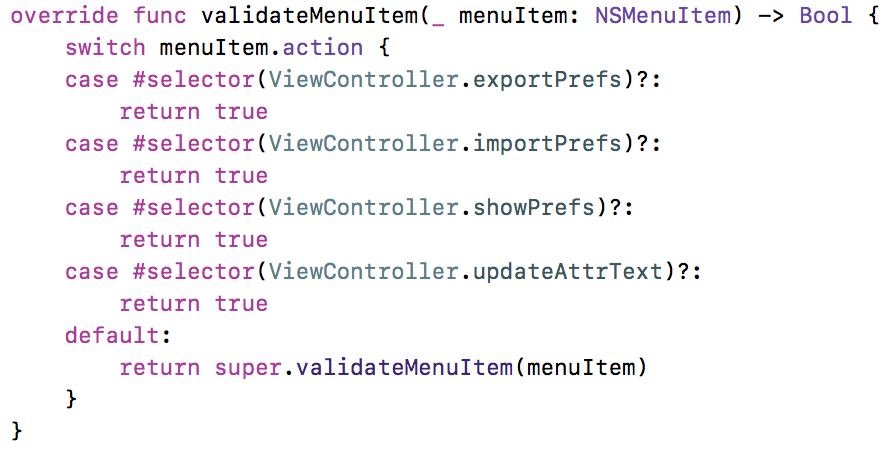 The exception immediately vanished, and order has been restored.

I’m puzzled as to why this worked without problems before I overrode validateMenuItem, but broke the moment that it relied on the super call in my overriding function. It’s tempting to blame it on Xcode 9, but exactly the same happened in the current beta of Xcode 10, so it looks as if this behaviour is expected, if aberrant to my eye.