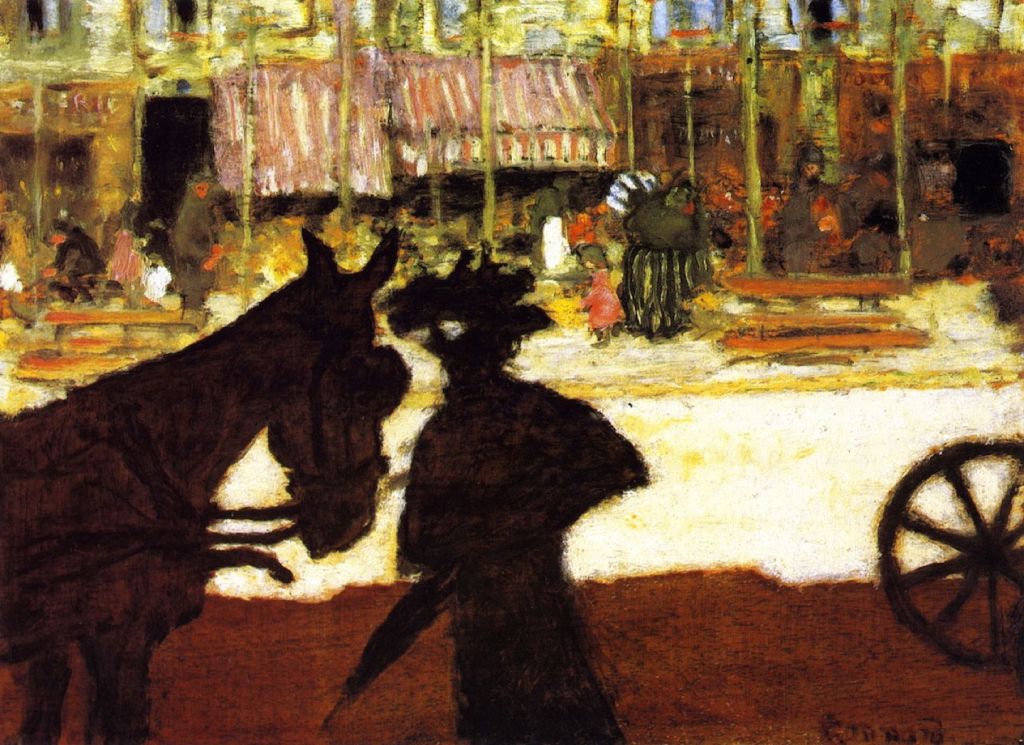 The most important event in 1893 for Pierre Bonnard (1867-1947) was his meeting with the young Maria Boursin, in Montmartre. She lived under the name of Marthe de Méligny (1869-1942), and was first to model for Bonnard, then to become his partner for life. They didn’t marry until 1925, when he discovered her real name. At the time, she claimed to be sixteen, but if the year of her birth is correct, she would have been ten years older.

If Bonnard remains something of a mystery, Marthe was a closely-guarded secret.

Although Bonnard remained with the Nabis, he became a prolific oil sketcher, most particularly of scenes in and around Paris. Those sketches were controversial at the time, receiving quite a mixed reception, and more recently have been relatively ignored. In them we see the evolution of his mature style and some of his most important themes, so this article shows a selection drawn from a short period.

Bather (Bather near a Boat) (1893) is a quick oil sketch on paper in which his style is just starting to drift away from his earlier Nabi works. It is also one of his earliest paintings to evoke the feeling of the voyeur, as the viewer watches this naked woman descending a bank to bathe.

On the Boulevard (1893) is a dark sketch on cardboard of a street scene in Paris. There’s a crowd outside a café at the left, with some children standing at the edge of the pavement. Moving towards the viewer is a man pushing what is most probably a market barrow, in front of which a dog is sat in the road. Behind them is a horse-drawn cab, and in the background an enclosed carriage passes from right to left.

Three Ages (Maternity) (1893) is a Nabi treatment of a classical theme, with a newborn infant sat on its mother’s knee, and grandmother behind. Bonnard’s decorative effect on the mother’s dress is applied flat, rather than being projected over her 3D surface. This gives the painting the look of collage.

In his Woman Pulling on her Stockings (1893), Bonnard returns to his theme of the voyeur, watching his model (Marthe, perhaps?) dressing on the crumpled sheets of her bed. There may be little flesh exposed, but we are here witnessing something very private.

In 1894, Bonnard met Thadée Natanson and his wife Misia. Thadée had co-founded La Revue Blanche, an arts magazine which published writing by and aided the careers of Marcel Proust, André Gide, Octave Mirbeau, and others. He came from a wealthy banking family, and his wife Misia was to become Bonnard’s close friend, muse, and patron.

That year, The Nabis – Bonnard, Denis, Ibels, Ranson, Roussel, Félix Vallotton, and Vuillard – exhibited as a group in Paris.

Bonnard was by no means confined to the city of Paris, and continued to visit the area around his family’s country property in Le Grand-Lemps. Dauphiné Landscape (c 1894) is a vigorously-painted oil sketch of the countryside there, made on cardboard.

A Red Roof (1894) appears to be an even quicker oil sketch of the same view, this time with dense yellow flowers in the hedgerow of its foreground.

Back in the capital, On the Street, Woman with an Umbrella (1894) is another oil sketch on board. A woman in the foreground is handling her umbrella, as her two dogs with blue bows around their necks run around her. Behind her is an open carriage drawn by a single white horse, and in the background a second carriage passes by.

The Large Garden (1894-95) is one of his few larger studio works from this period, now in the Musée d’Orsay. It shows the large grassy orchard garden of a house in the country, possibly in the Dauphiné. As well as three children and the mother/housekeeper, there is a rich collection of domestic creatures. The woman has gathered in and folded white sheets, which have been drying on the fence which crosses the canvas.

The third child has been cropped as if at the edge of a photograph. This enhances the impression of her running briskly to the right.

In 1895, the dealer Ambroise Vollard commissioned Bonnard and other Nabis to make lithographs for albums. Just after Christmas, Bonnard and several other Nabis exhibited at the First Salon of Art Nouveau organised by Siegfried Bing.

Bonnard’s The Barrel Organ (The Organ Grinder) (1895) shows a familiar street scene from any town or city in Europe: a street musician playing a small hand-cranked pipe organ, which played set tunes automatically. A woman dressed in red is leaning down looking at him from the window above. These barrel organs remained quite a popular means of earning a living well into the late twentieth century.

The Carriage Horse (1895) is a literally brilliant exploration of light and shadow on the street. The sun is behind the viewer, shining brightly into the far side of the street and the cafés beyond. Close to the viewer, in the shadow cast by the buildings behind the viewer, is a woman holding an umbrella, and to her left the blinkered carriage horse of the title.

Bonnard’s indoor works were slower to evolve away from their Nabi beginnings. His Child Eating Cherries from 1895 is painted more sketchily, as with his street scenes, but he still uses collage-like decorative patterns to flatten the image, as in the boy’s check shirt.

Some of Bonnard’s quick oil sketches became quite cartoon-like, such as this group of half a dozen children On the Way to School, from 1895.

Woman at the Window (Among the Seamstresses) (c 1895) has little other than the suppressed patterning of its surfaces to refer back to his Nabi paintings. Two women, identified as seamstresses by Bonnard’s title rather than any real visual clues, sit by a window looking out into the street, although neither is actually looking out. The building on the other side of the road is very similar to that shown in The Barrel Organ above.

Finally, another voyeuristic view of a Woman Putting on Her Stockings from 1895 is even more likely to feature Marthe as its model, and is a more overt precursor to the many paintings that he was to make of her later.

At the end of 1895, Bonnard was busy preparing for his first solo exhibition, which was to open on 6 January 1896 at Durand-Ruel’s gallery in Paris.