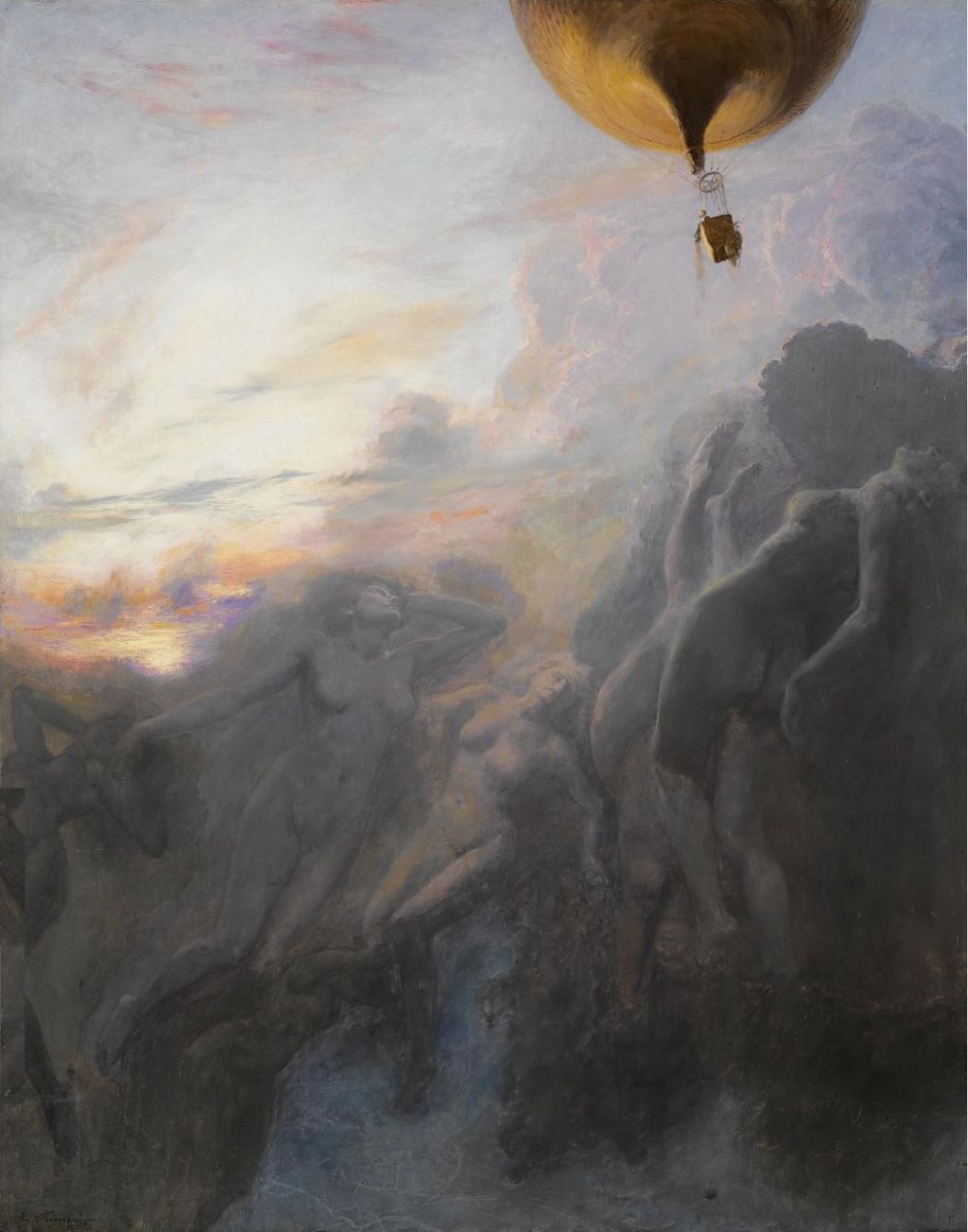 Until 1783, flight was one of the greatest attributes of the gods, and of birds. Untold numbers of paintings showed super-humans making their way through the air, while lesser mortals remained fixed to the ground.

Human aviation was born on 19 October 1783, when three men flew in Paris in a tethered balloon made by the Montgolfier brothers. By the end of that year, humans had flown to a height of about ten thousand feet (3 km).

The later eighteenth century saw a succession of high-profile balloon flights, including an Ascent of a Balloon in the Presence of King Charles IV and his Court in late 1783, painted here by Antonio Carnicero.

Although only considered a minor painter of his time, Carnicero’s Ascent of Monsieur Bouclé’s Montgolfier Balloon in the Gardens of Aranjuez from 1784 is one of the most beautiful records of these early balloon flights. In this case, it was the ascent of a Montgolfier balloon in the gardens of Aranjuez, a royal palace about fifty kilometres to the south of Madrid, Spain. This took place of 5 June 1784, and the pioneer aviator was a Frenchman, Bouclé.

The spectators are members of the royal court and aristocracy, who are wearing costumes typical of majos and majas, in keeping with their place in society.

Better-known artists such as Louis Joseph Watteau couldn’t miss this opportunity in The Fourteenth Flight of Monsieur Blanchard from about 1785. This took place in Lille, in France but on the border with Belgium, on 26 August 1785. Blanchard was accompanied by the knight of Lépinard, known for his adventurous exploits. Five days later the pair returned to Lille to a gun salute and fanfares. Watteau painted two works, which were engraved by Helman and proved popular as prints.

The French had stolen an early lead in aviation, and the British remained sceptical of its safety and merits. It took George Biggin’s Ascent in Lunardi’s Balloon, painted here by the wonderfully-named Julius Caesar Ibbetson in 1785-88, to break the ice for them.

By the middle of the nineteenth century, ballooning had become an unusual but by no means exceptional activity. Cities like Paris saw quite frequent ascents when the weather was favourable. Charles Méryon’s etching of Pont-au-Change from 1854 shows a balloon being flown over the centre of Paris.

Balloons started to play a part in everyday life, and in war. One of the more famous flights from Paris is shown in Jules Didier and Jacques Guiaud’s painting of the Departure of Gambetta in the Balloon ‘Armand-Barbès’ on 7 October 1870 (c 1870), during the Franco-Prussian War. By the time that the Prussians had encircled Paris, the French government had fled to Tours, leaving Léon Gambetta, the Minister of the Interior, trapped in the city.

Gambetta arranged to be flown from the foot of Montmartre in a hot-air balloon, escaping on 7 October 1870. His balloon, named Armand-Barbès, was one of over sixty which were being used to deliver mail and some essential supplies to Paris at the time, which gives an idea as to how popular ballooning had become. His balloon was named after Armand Barbès (1809-1870), a French Republican revolutionary who died in exile in the Netherlands, a matter of weeks before the fall of the Second Empire.

Here, a woman seen almost in silhouette waves at one of the balloons bearing news, as it flies near Mount Valérien. In her right hand she holds a musket, symbolic of the arming of the people of Paris at the time. The same woman appears in mourning in The Pigeon, collecting a carrier pigeon which had flown through the predatory hawks flown by the Prussians.

The two paintings meant a great deal to Puvis de Chavannes, who reluctantly gave them to the government a few years later, to be prizes in a lottery organised to provide aid to the survivors of the great fire of Chicago in 1871. They didn’t return to Paris until 1987, and are now in the Musée d’Orsay.

Despite their use of motifs showing modern means of transport such as the railways, I have been unable to locate any paintings of ballooning by the French Impressionists.

One of the few paintings of this period showing ballooning is that of the Hungarian realist Pál Szinyei Merse, The Balloon from 1878.

American art of the period also seems to have included very few paintings of ballooning, the best-known being William Holbrook Beard’s romantic The Lost Balloon from 1882. This appears to refer to a narrative, but I have been unable to find that reference.

The American post-Impressionist Maurice Prendergast found The Balloon on a beach in 1898. Although he may have painted this during a trip to Venice that year, I suspect the location is on the East Coast of the USA, where he had his studio in Boston.

The first Naturalist painting of a balloon which I have found is Émile Friant’s Journey to Infinity (1899). In this extraordinary flight of fancy in a balloon, it soars high above a bank of grey clouds (or possibly a rugged mountain ridge) containing the forms of five nude women, one of them apparently performing a handstand.

This might appear to be a symbolist work, but I suspect that Friant painted this for the pioneer woman aviator Marie Marvingt (1875-1963). Friant himself co-founded the first aviation club in Nancy; Marvingt was already a successful athlete and mountaineer, and had moved to Nancy ten years earlier.

Between 1903 and 1905, pioneering flights were made by the Wright brothers in the USA, following which there was rapid development of aircraft. Unlike the early history of ballooning, heavier-than-air flight was captured overwhelmingly in photographs, not paintings.

Ironically, it was the self-taught primitivist artist Henri Rousseau who painted landscapes incorporating aircraft in the early years of the twentieth century. This view of Quai d’Ivry in Paris from about 1907 shows an airship crossing its sky.

The following year, Rousseau painted this View of the Bridge in Sèvres and the Hills of Clamart, Saint-Cloud and Bellevue with Biplane, Balloon and Dirigible (1908), which is an excellent summary of the state of aviation in the years following the Wright brothers’ first flight.

Jean Béraud painted another Naturalist work, Flight of a Biplane of Wright Type, at around this time. This is unusual in its attention not to the novel aircraft, which is cut off the left edge of his canvas, but on the scattered crowd below, waving at the plane.

By 1908, the traditional visual arts had paid surprisingly little attention to the revolution which was taking place up in the skies. Neither the Naturalists nor the Impressionists seem to have been interested in this aspect of modern life, but had left it to their photographic rivals to capture the story of early aviation. Thankfully, this was about to change.