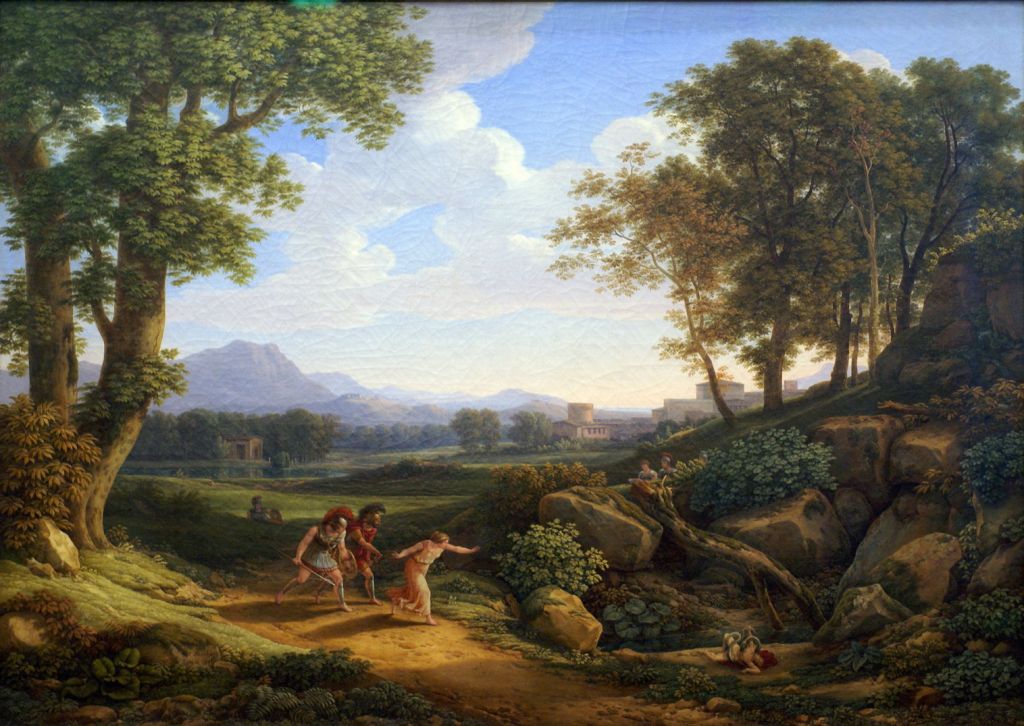 Jason, of Golden Fleece fame, comes across as one of the better heroes of classical myth. Compared with multiple murderer, rapist, and utterly untrustworthy partner Theseus, or Hercules/Heracles, or …, perhaps he’s just the best of a bad bunch. Until you look at the way that he treated the women whom he married.

His first bride is almost forgotten now: Hypsipyle, Queen of Lemnos, a rather beautiful Greek island known now for its superb sandy beaches.

According to myth, Lemnos had a troubled history. Its womenfolk had neglected due worship of Venus/Aphrodite, so the goddess made their husbands reject them. In revenge, the women decided to kill the men, leaving the island populated only by women. There had been one exception: Hypsipyle had spared her father, originally the king, by tucking him into a large wooden chest and pushing him out into the sea. King Thoas was recovered, and Hypsipyle secreted him away quietly.

Just when the situation for the women of Lemnos was looking worrying, who should turn up but Jason and his fifty hunky Argonauts. Perhaps word had got around that they might be welcomed there. They certainly seemed to enjoy their visit, and didn’t find much time to send any postcards back to their families explaining what they were doing. Jason, according to his status, was entertained by Queen Hypsipyle to the point where they married and she later gave birth to twins.

But Jason and the Argonauts had a mission in Colchis, and once it became clear how fruitful their stay on Lemnos had been, they set sail in quest of the Golden Fleece. Jean Pichore’s miniature shows Jason parting from Hypsipyle, making their twins look quite advanced in age.

Jason then met the sorceress daughter of King Aëtes, Medea, who helped him accomplish the series of trials, culminating in him putting the monster which guarded the Golden Fleece to sleep, and achieving his mission. King Aëtes welshed on his deal with Jason, so the hero made off with both the Golden Fleece and Medea, marrying her bigamously on their way back to Thessaly.

When Hypsipyle hears of this, she is unimpressed, to say the least. It is at this stage that Ovid imagines, in the sixth letter of his Heroides, Hypsipyle writing to Jason, as shown in the two miniatures below, painted by Robinet Testard.

The writing is not on the wall in Gustave Moreau’s Jason (1865), but in the almost illegible inscriptions on the two phylacteries wound around the column.

Cooke has deciphered their Latin as reading:
nempe tenens quod amo gremioque in Iasonis haerens
per freta longa ferar; nihil illum amplexa timebo
(Nay, holding that which I love, and resting in Jason’s arms, I shall travel over the long reaches of the sea; in his safe embrace I will fear nothing)
et auro heros Aesonius potitur spolioque superbus
muneris auctorem secum spolia altera portans
(And the heroic son of Aeson [i.e. Jason] gained the Golden Fleece. Proud of this spoil and bearing with him the giver of his prize, another spoil)

We should thus read the painting in terms of the conflict between Jason and Medea: Medea expresses her subjugate trust in him, whilst Jason considers her to be just another spoil won alongside the Golden Fleece. And she was a spoil which Jason was quick to dispose of when it suited him: when he met Glauce (or Creusa, but not the wife of Aeneas), he decided to move on and marry her too.

In JMW Turner’s spectacular Vision of Medea (1828), Medea is now in the midst of an incantation to force Jason’s return. In the foreground are the materials which she is using to cast her spell: flowers, snakes, and other supplies of a sorceress. Seated by her are the Fates. In the upper right, Medea is shown again in a flash-forward to her fleeing Corinth in her chariot drawn by dragons, the bodies of her children thrown down after their deaths.

Meanwhile, life for the spurned Hypsipyle wasn’t easy either. The women of Lemnos discovered that she had been sheltering ex-King Thoas, and she ended up as a slave of Lycurgus, the King of Sparta. One of her tasks was to look after his son Opheltes, but one day her attention was distracted from her charge, and he was killed by a snake.

Johann Christian Reinhart’s extraordinary Classic landscape with Hypsipyle and Opheltes tells this almost as Poussin would have done, with an idealised landscape, the boy swathed in the snake’s coils, and Hypsipyle rushing to try to save him. I think this is an extraordinary painting because, despite almost passing as a Poussin painted in about 1650, Reinhart completed it almost two centuries later, in 1816.

For neglecting Lycurgus’ son, Hypsipyle was almost put to death, but for once the Fates were lenient, and she and her two sons were allowed to return to Lemnos, where she retired gracefully from mythology.

Jason seemingly reaped what he had sown. Medea presented his new bride Glauce/Creusa with a magic dress, which burned her and her father to death. Jason’s faithlessness towards Medea brought him disfavour with Juno/Hera, and he spent the end of his life alone and unhappy, sleeping rough under the stern of the rotting hulk of his ship, the Argo. One night the timbers collapsed on him as he slept, killing him.