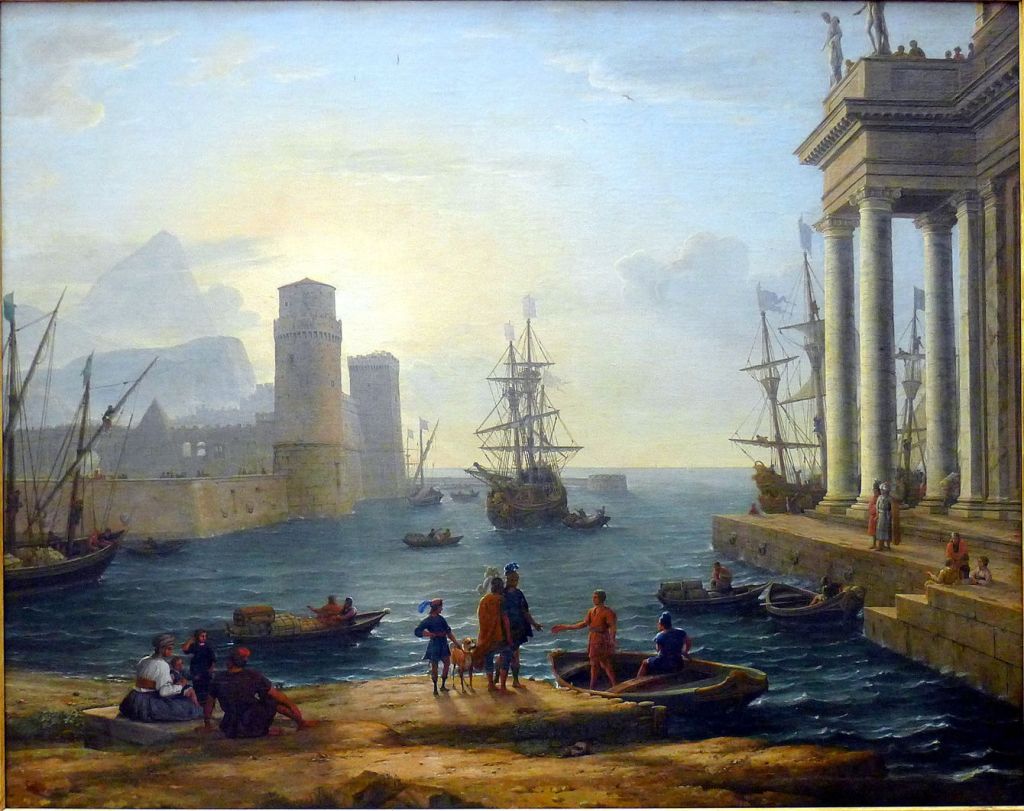 Claude Lorrain was not only a pioneering landscape painter, but he was also one of he first to realise the particular attractions of the coast. From as early as the 1630s, Claude developed a long series of exceptionally innovative and beautiful depictions of idealised coastal scenes, continuing to paint them until the final few years of his career.

Claude’s training and early career remain something of a mystery, and his artistic heritage is traced back to Paul Bril: I have written about this here and here.

During the 1630s, Claude established his reputation as one of the two greatest landscape painters of the period, alongside the other Frenchman in Rome, Nicolas Poussin. They both painted idealised landscapes, composites of passages from different physical locations, based on extensive plein air studies, a practice which Claude showed in An Artist Studying from Nature (1639).

Here is an imaginary harbour dominated by a large tree and a fortified building, bathed in the glowing light of dusk. The building resembles the Castle of Palo, a fortified structure on the Mediterranean coast to the west of Rome. Claude made several drawings at the Castle of Palo, just as the artist in the lower right-hand corner of this painting is doing.

Claude studied the specifics of nature in these sketches in front of the motif, in order to achieve the ideal results which we now enjoy. He kept a meticulous illustrated record of this and his other paintings in his Liber Veritatis (Book of Truth), which is now in the British Museum.

Claude developed a number of themes in his coastal landscapes, of which the best-known are set in an imaginary recreation of the Roman port of Ostia, looking along the length of the harbour between classical buildings into the setting sun. His Embarkation of St Paula is an early and particularly fine example, and a reflection of the influence of Tassi in his paintings.

In 285 CE, the noble Roman widow and mother of five, Saint Paula, decided to leave Rome with her son, in pursuit of life as a hermit. She took her son Eustace to Antioch, where she withdrew with the spiritual guidance of Saint Jerome, whose ascetic withdrawal is a popular subject in paintings. Claude painted several versions of this, of which the earliest dates from 1639 and is in the Prado in Madrid; this is the superb and slighly later version in the Dulwich Picture Gallery in London.

With a market still not ready for pure landscapes, Claude embeds narratives in most, as Poussin did for much of his career. Whereas Poussin excelled as a figurative artist, and used aids including wax figures in a model, Claude seems to have struggled more with his people. In The Trojan Women Set Fire to their Fleet (c 1643), he shows another fine view along what must be the west coast of Italy, with groups of women about to set fire to the ships.

This is based on Virgil’s Aeneid, Book 5 (604-710), and follows the years of wandering enforced on the Trojan Women following the city’s destruction. The building clouds warn of a storm sent by Jupiter in response to Aeneas’ prayers, which quenched the blaze.

Claude was commissioned to paint this for a scholar, Girolamo Farnese, who had returned to Rome in 1643 after serving as papal nuncio in the Alpine cantons of Switzerland – which must have been not dissimilar an experience to that of the Trojan Women.

The Embarkation of Ulysses (1646) is a later painting of Claude’s port theme, also known as Odysseus Departs from the Land of the Phaeacians. This shows Ulysses/Odysseus at the end of his epic adventures when returning from the Trojan Wars. He was shipwrecked and made friends with the Phaeacians, who then helped him return to his home at Ithaca. Here, he leaves on the last leg of that journey, although as Homer’s Odyssey makes clear, that was only the start of further adventures in trying to establish his identity and get rid of his wife’s many suitors.

Claude has attracted some criticism in his depiction of anachronistic ships; in all his coastal paintings, vessels shown were contemporary with the artist not the story shown. That was common practice at the time, and in this particular case might have been more appropriate anyway, as the Phaeacian ships were supposed to have been different from others of that era, and ‘as fast as a falcon’. However, the square-riggers shown did not evolve until many centuries later.

Claude’s Seaport with the Embarkation of the Queen of Sheba (1648) is one of a pair of paintings known as the Bouillon Claudes, its pendant showing a landscape with the marriage of Isaac and Rebecca. These were commissioned by the Duc de Bouillon, the general of the Papal Army, hence their name.

The Old Testament story shown is that of the visit by the Queen of Sheba to King Solomon in Jerusalem, as told in 1 Kings chapter 10. Although the visit itself is well-known from many other paintings, and the two monarchs frequently depicted, this is probably the only major work showing this scene. Given the uncertainty as to which figure (if any) is intended to be the Queen of Sheba, it was really another platform on which to create an into-the-sun port landscape.

This was possibly the painting by Claude which was JMW Turner’s direct inspiration for his Regulus (1828), also painted when Turner was in Rome.

Narrative also takes a back seat in Claude’s wonderful Coastal Landscape with Acis and Galatea (1657). This apparently refers to the account in Ovid’s Metamorphoses of the romance between Galatea, the fairest of all the fifty Nereids, and Acis. I will shortly be telling this in my series on paintings of stories from the Metamorphoses, and this came to a tragic end when Acis was killed by the jealous Cyclops Polyphemus.

Embedded deep within this idealised coastline is the figure of Polyphemus, at the right, who is watching Acis and Galatea in their makeshift shelter, as Cupid sits beside them. Additional Nereids are at the left, among the trees.

The next two paintings by Claude show the famous scene from Ovid’s Metamorphoses (spanning the end of Book 2 and the start of Boook 3) in which Jupiter, disguised as a white bull, abducts then rapes Europa on the island of Crete. You can read the whole story, and see other paintings of it, in this article.

Coast View with the Abduction of Europa (c 1645), above, and Coast Scene with the Rape of Europa (1667), below, feature similar arrangements of the figures, in two quite different coastal settings. The earlier of the two (above) closes the view in with a repoussoir of trees at the left, and the trees and buildings at the right. The later painting (below) is far more open, and the castellated tower now behind the distant ships.

Claude painted another three versions of this myth, the earliest in 1634, and the latest is that shown below.

Composed along similar lines to the later of his paintings of Europa, Claude’s Landscape with Aeneas at Delos (1672) marks the start of a series of ten paintings based on classical mythology, in this case Virgil’s Aeneid, and perhaps that of Ovid’s Metamorphoses which retells those events.

Ovid’s account is retold here, where I explain that the twin trees, an olive and a palm, in the centre are those to which the goddess Latona held when giving birth to the twins Apollo and Diana. Aeneas, his father Anchises, and son Ascanius are in conversation with Anius, the King and priest of Delos towards the right, and the relief at the top right tells another story of Apollo and Diana when they had grown up.

My final choices are two of Claude’s many surviving studies: Perseus and the Origin of Coral from about 1671 (above), and Coast View with Perseus and the Origin of Coral from 1674 (below). Dissimilarities between the landscapes shown in the two drawings and the inclusion of figures for its narrative confirm that these are compositional studies. By this stage, Claude had already arrived at the general form of his composite landscape, here showing a spectacular rock arch to the right, and the repoussoir of the trees at the left.

The story the figures are telling is of Perseus and Andromeda, as told in Ovid’s Metamorphoses, towards the end of Book 4. Once the hero Perseus has rescued the beautiful Andromeda from the threat of death by the sea monster Cetus, he places the head of Medusa, which he had been carrying in a bag or kibisis, on a bed of seaweed on the shore. The blood still oozing from Medusa’s severed neck promptly turns the seaweed into coral. You can see other marvellous narrative depictions in this article.

Claude shows no sign of the dead Cetus, and brings the winged horse Pegasus with Perseus, a significant detail which is not in Ovid’s account. Perseus appears to be at the lower right, just about to place the head of Medusa on the bed of seaweed, perhaps. Claude produced the finished painting Coast View with Perseus and the Origin of Coral in 1674 for this commission by Cardinal Camillo Massimi. Five other studies are known.

As a narrative painter, I think that Claude’s small and indistinct figures make his paintings very hard to read. As a landscape painter, he was at least the equal of Poussin, and he really excelled at coasts.